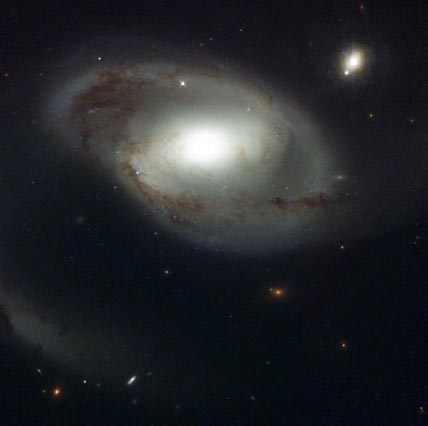 What seems to be a 'next-door neighbor' to NGC 4319 is actually a billion light-year distant quasar.

The Hubble Space Telescope captured this scene in the constellation Draco. The large galaxy is the 80 million light-year distant NGC 4319. And to its upper right is an object that looks to be a nearby companion. But looks can be deceiving. The "neighbor" is actually a quasar — an extremely distant galaxy with a superbright core — known as Markarian 205. It resides 1.1 billion light-years away, some 14 times farther than the galaxy at the fore.

Within NGC 4319 spiral arms, striking dust lanes, and a large, subtle central bar are all clearly visible. The dust lanes are of particular interest — the distorted dark patches suggest that NGC 4319 interacted with a nearby galaxy in the past.

The view is 1.8 arcminutes across, corresponding to some 40,000 light-years. The image is a composite of two shots taken in 1997 and 2002. A total of 1.4 hours of Hubble observations were added to create the picture seen above.

For more information, see the press release from the Space Telescope Science Institute.