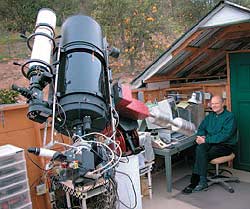 The past decade has seen an explosion in the number of backyard observers using high-end equipment and sophisticated software to record faint asteroids, discover supernovae, and even detect extrasolar planets. So it's not surprising that many accomplished amateurs yearn to contribute directly to scientific research. Over the years many of them have sent observations to organizations like the American Association for Variable Star Observers and the International Occultation Timing Association. But for those who wanted to work one-on-one with a professional astronomer, the opportunities were few and far between.

Now there's a new avenue for pairing eager backyard observers with willing researchers. At June's meeting of the American Astronomical Society in Denver, Colorado, members of the AAS's Working Group for Professional-Amateur Collaboration announced the inauguration of an online "registry" service. First conceived in 1998, the registry is a searchable database that allows amateur astronomers to detail their abilities and professionals to make known their observational needs. According to James C. White II, WGPAC's outgoing chairman, the registry will provide an important missing link in furthering pro-am collaboration.

At the AAS meeting, which featured a special session titled "Professional-Amateur Collaboration for Enhanced Research," WGPAC members Jeff Stoner and Janet Stevens presented details about how the registry will work. Any interested observer can create an entry in the "amateur" section with basic information like name, e-mail address, telescope specifications, and observing experience. Meanwhile, astrophysicists can post details about their research projects and what kinds of observations are needed in the "professional/project" section. Both sets of listings can be searched for particular interests or needs, though Stoner notes that the search capabilities have not yet been finalized.

Among the dozens of practicing astronomers attending the AAS special session was Alan Harris (Space Science Institute), who points out that amateur observers have determined about a third of the 1,500 known rotation periods for asteroids. "Amateurs are always thanking us for the interest we professionals show in their work, but I think it's going in the wrong direction," Harris comments. "It's we who should be thanking them for their involvement."