Here are two items demonstrating that, sometimes, "less is more." 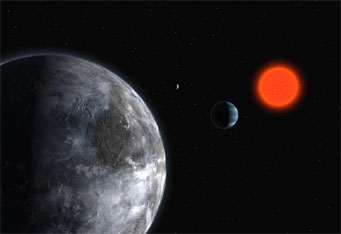 The dim dwarf star Gliese 581 and its retinue of planets.

The first comes from well-known planet hunter Michel Mayor (Geneva Observatory). Over the years Mayor and his observing teams have identified many of the 346 known extrasolar planets. In fact, such discoveries have become so commonplace that they're often simply tacked onto the list without fanfare.

But the one Mayor announced yesterday at a European science conference ranks as the lowest-mass planet yet found circling a normal star. Designated Gliese 581 e, it tips the cosmic scales somewhere between 1.9 and 3 Earth masses — the uncertainty comes from not knowing how the orbit is angled to our line of sight.

And while this world might very well have a rocky composition, it's not a very habitable place. It circles just 0.03 astronomical unit (3 million miles) from its parent star, taking only 3.15 days to go around. So even though Gliese 581 is a relatively dim M dwarf, the newfound planet is far too hot to be habitable. 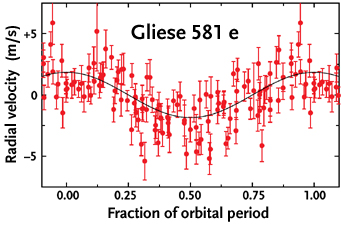 The innermost planet circling the dwarf star Gliese 581 has a mass only 1.9 to 3.0 times that of Earth. During each 3.15-day orbit, as shown here, it causes a reflexive motion in its host star of only 2 meters per second — near the limit of detectability with current technology.

Still, it's an interesting system. Located in Libra at a distance of 20.5 light-years, Gliese 581 now has a known retinue of four planets. One of these, d, is a Neptune-size world that Mayor and his team have determined is far enough away (0.22 a.u.) to occupy a temperature niche where liquid water could exist.

It took the observers four years to amass enough observations at La Silla Observatory in Chile to confirm the existence of Gliese 581 e. As he notes in a press release, "It's amazing to see how far we have come since we discovered the first exoplanet around a normal star in 1995." (The release erroneously trumpets that this is the "lightest exoplanet yet discovered" — that title actually belongs to a tiny cinder orbiting the rapidly spinning neutron star PSR 1257+12.) 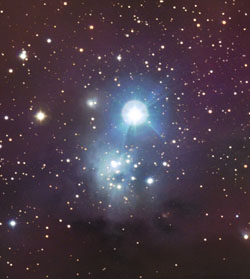 The star-forming region IC 348 in Perseus. Click on the image for a larger view that includes nearby NGC 1333, or click here to see original high-resolution image.

The second announcement comes from a trio of astronomers using the Canada-France-Hawaii Telescope on Mauna Kea, Hawaii. Andrew Burgess, Estelle Moraux, and Jerome Bouvier have identified a trio of bantamweight dwarfs in the star-forming region IC 348, which is roughly 1,000 light-years away in Perseus.

Each less than 10 times the mass of Jupiter, the objects are probably too small to be brown dwarfs. Burgess estimates that their temperature is only 1100° to 1300° F (900° to 1000° C). Yet they're floating freely, not bound to any star, so they're not planets. (According to a definition for large exoplanets adopted by an International Astronomical Union group in 2003, they're technically called "sub-brown dwarfs".)

Whatever you want to call them, these remarkable finds should help astronomers understand the wide range of objects — from minuscule dwarfs to high-mass superstars — that coalesce in star-forming regions.

Burgess announced the discovery today during the European Week of Astronomy and Space Science gathering in England. A press release is here.

"...a trio of astronomers have identified a trio of bantamweight dwarfs in the star-forming region IC 348..." Looking at the image, I only see two.

If this Neptune size planet orbiting in habitable zone could have a Titan'size moon, this moon could be what it isn't his mother planet: a life forming "rock" .

is possible to detect such moon? Or it will be for the future Webb space telescope ?