Big news! A team led by Adam Riess of the Space Telescope Science Institute and Johns Hopkins University upheld the theory of dark energy against a competing theory. How? 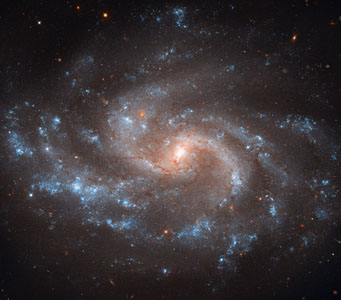 NGC 5584 is a key link in the cosmic-distance chain. It contains 250 Cepheid variable stars that have been studied in detail with the Hubble Space Telescope, making it possible to measure its distance with great accuracy. And in 2007 it was host to a Type 1a supernova, the best cosmic measuring stick.

The team managed to measure the expansion rate of the universe with an impressively small margin of error through a complicated process involving supernovae, variable stars, and the new Wide Field Camera 3 on the Hubble Space Telescope. Click here to see the news release.

Observations show that the universe is expanding at an ever-increasing rate. So far, attempts to explain the accelerating expansion have mainly focused around a poorly understood repulsion force known as dark energy. Some astronomers, however, believe that the observed accelerating expansion of the universe could arise from our galaxy being in the center of a vast void; in this scenario, objects in the void, where there would be relatively little mass, would be gravitationally attracted to the edges of the void.

In order to measure the expansion of the universe — and in so doing, learn more about its possible causes — astronomers need two key ingredients: speed and distance. Speed is relatively easy; measuring the redshift of galaxies gives the rate of expansion to better than 1% accuracy.

"But the distances have been a source of pain and misery for astronomers since Hubble's time," says Robert Kirshner, a professor at the Harvard-Smithsonian Center for Astrophysics who uses supernovae to measure the universe's expansion rate.

Left:A small portion of the original Hubble Deep Field image, which the Hubble Space Telescope acquired in late 1995 to find the faintest galaxies yet. Right: The same piece of celestial real estate, imaged 6½ years later with Hubble's Advanced Camera for Surveys. The ACS serendipitously captured a supernova explosion (SN2002dd) that took place when the universe was slightly less than half its current age. The tiny sliver of light labeled "host?" may be the dying star's home galaxy.

Astronomers have long used a special kind of supernova (Type 1a) as a standard candle, a kind of cosmological ruler. Astronomers think that the brightness of this kind of supernova is always roughly the same. And if they know how intrinsically bright a certain kind of object is — i.e., how bright this type of supernova would be if you were unfortunate enough to be right next to it — then they can figure out how far away that supernova is by measuring how much dimmer it is compared to its intrinsic brightness.

Then comes a chicken and egg problem: in order to figure out how intrinsically bright an object is, at some point you need to know exactly how near or far that object is. But you can't know one without knowing the other.

That is, unless you use some other nearby, predictable object to calculate the distance to the supernova, which is exactly what Riess and his team did. They scoured the list of Type 1a supernovae, and found eight cases where the Hubble Space Telescope was able to observe Cepheid variables in the galaxy that hosted the supernova. Using the Cepheids, they were able to calculate the distances to these eight supernovae with unprecedented accuracy.

Cepheid variables are the best-studied standard candles of all; they’re what Edwin Hubble first used to measure the distance to the nearby Andromeda Galaxy in 1925. Unfortunately, they’re too faint to be seen in distant galaxies, even by the Hubble Space Telescope. Type 1a supernovae can be detected nearly to the edge of the known universe, but their intrinsic brightness is hard to determine. Riess’s study ties these two distance scales together better than ever before, significantly improving our ability to measure the distances of remote galaxies.

Having measured both recession speed and distance with good accuracy, Riess and his team came up with a figure for the expansion rate of the universe with an uncertainty of only 3.3%. (Their value is 73.8 ± 2.2 km per second per megaparsec.) By reducing the margin of error by 30% over the Hubble Space Telescope’s previous best measurement in 2009, his study made it clear that the void theory of accelerating expansion, already unlikely, is now virtually a statistical impossibility: the expansion rate calculated in this study is significantly larger than those that would be observed in the most plausible "void" scenarios, and the margin of error is too small to allow for any wiggle room.

This is how Kirshner puts it: "The Riess paper claims that the models that avoid dark energy by positing a big void are 5-sigma from the measured expansion rate. That's the polite way to say 'wrong.'"

So yeah, we can calculate a distance. The margin of error would be enormous.

Assuming the universe has continued to expand according to theory, the edge of the visible universe is now on the order of 45-50 billion light years away.

It is (almost) meaningless to speak of the 'distance' between us and such a faraway object. At the time the light was emitted, the object would have been much closer, but expansion of the universe over the intervening aeons will have greatly increased the distance between us.

Indeed, if we ask the question: "how long would it take a light beam emitted today from Earth to reach this galaxy?" the answer may well be that the light could never reach its destination, as the space between us expands faster than the light beam can travel.

Because Einstein insists that there is no universal definition of 'now', this even applies at a more mundane level. Let's suppose car is one mile (say 1500m) away and travelling away from us at 45mph (say 20m/s) when it emits a short pulse of light. That pulse will take 1/200,000 of a second to get to us, by which time the car will be a further 0.1mm away. And if we reflect the light straight back, it will need to travel a further 0.1mm before it could be detected by someone in the car. So how far away is the car? It all depends on what you want to measure. (Note that this is all simple Newtonian mechanics, Relativity may be neglected at these speeds and distances.)

But when we're talking about something much farther away and 'travelling' much faster, these differences can become very significant indeed. If you wish to learn more, I recommend Liddle's "An Introduction to Modern Cosmology", which deals with these concepts while avoiding the complexities of Tensor Mechanics and Minkowski Space-Time.

Very nice job Ms. Kloss. You have consisely and clearly reported an important and difficult idea. Mr. Miller does a nice job, too.

The universe is not increasing its rate of expansion. The slower distant galaxies appear slower because of cosine error. It is a relativity effect from a positively curved universe.