Among the world's professional observatories, the one in Big Bear, California, is unique. 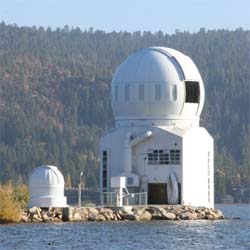 First, it's located in a lake — not along a lake, but in it! This was Caltech astronomer Harold Zirin's idea. In the late 1960s he wanted to build a world-class facility for studying the Sun, and he was attracted to the clear stable air over Big Bear Lake high in the mountains about 100 miles east of Los Angeles. Zirin equipped his pride and joy with a trio of scopes having apertures of 8 to 25 inches (20 to 65 cm).

Second, it's one of three observatories that Caltech gave up. (Do you know the other two? If so, leave me a comment!) In 1997 this venerable bastion of science and engineering turned over Big Bear's keys to the New Jersey Institute of Technology, which promptly dedicated the facility to honor Zirin, who'd managed it for some 30 years.

Third, Big Bear Solar Observatory (BBSO) is home to the world's largest solar telescope (until the Advanced Technology Solar Telescope comes online later this decade). Last October, NJIT finished a five-year overhaul that brought in a state-of-the-art telescope with a clear aperture of 63 inches (1.6 m), actuators to contort the primary mirror for optimum sharpness, and an off-axis f/52 design that provides an unobstructed light path. 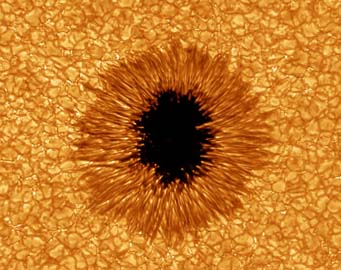 "First light" for Big Bear's New Solar Telescope (NST) targeted this larger-than-Earth sunspot on July 2, 2010. The smallest details are about 50 miles (80 km) across. Click here for a larger view.

Finally (and here's the point of telling you all this), Big Bear's big new telescope has now taken its official "first-light" image, at right — and it's amazing. Sunspot number 1084 didn't look all that special when it crossed the solar disk eight weeks ago — check out the small image below it, acquired by a camera on the SOHO spacecraft.

But the BBSO version, taken July 2nd, provides a wholly different perspective. According to an NJIT press release, the resolution is about 50 miles (80 km). To give you a sense of scale, the spot's dark center (its umbra) is roughly the diameter of Earth. It's surrounded by a lighter-colored penumbra. The spot sits lower than the surrounding photosphere, and recent research suggests that below each sunspot is a self-sustaining vortex of magnetic-field lines (a little like terrestrial hurricanes in that respect). 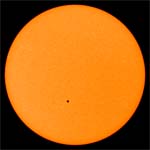 The textured stuff all around the spot, termed granulation, is the pattern of Alaska-size bubble of hot gas bringing the Sun's energy to the top of the photosphere, where it radiates to space as light and heat. Think "pot of boiling oatmeal," and you'll get the picture.

Sunspots are typically about 3,000° to 4,000°F cooler than their surroundings, but they're still plenty hot enough to be brightly incandescent. So why do they look dark? Because luminosity is proportional to the fourth power of temperature. Cool the Sun's surface by a third, and its brightness drops by 80%.

A companion image, this one recording the red hydrogen-alpha emission at 656.3 nm (6563 angstroms), probes a region about 600 miles (1,000 km) higher up, in the chromosphere. It was taken July 1st and shows the same sunspot at upper left. 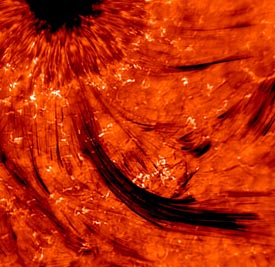 Taken on July 1, 2010, this view shows the same sunspot's appearance in red hydrogen-alpha light. Thin dark strands are streams of plasma. Click on the image for a larger view.

Philip Goode, the observatory's director, comments: "Around the bright sunspot edges are black fibers that look like strands of hair" but in fact they're jets of energized plasma being ejected upward. "What’s interesting," Goode adds, "is that when we look in visible-light, the sunspot appears pretty benign. However, this shows the real dynamics of the magnetic region and the jets exploding from the sunspot’s edges."

To close, I need to confess something. Zirin won't remember this, but he once gave me a job when I was an undergrad at Caltech — and it was the easiest job on the planet. Once every hour I had to climb to the roof of the (now-demolished) Robinson building, check the status of a solar telescope he had running, and take a quick series of calibration images. It took 5 minutes tops. The rest of the hour I could do anything I wanted: usually that involved eating, sleeping, flirting with secretaries, or goofing off — but rarely, if ever, studying!

The business loans are useful for people, which would like to ground their organization. By the way, this is very comfortable to receive a commercial loan.

After Brief Shutdown, Hubble Goes Back to Work