Some of the most luminous objects in the universe are invisible. If that sounds self-contradictory, remember that visible light occupies just a tiny sliver of the electromagnetic spectrum. If a distant galaxy is choked with dust, the tiny grains will absorb ultraviolet and visible starlight, hiding the system from view. The dust warms up, then reradiates the energy at longer infrared (IR) wavelengths that we can't see. 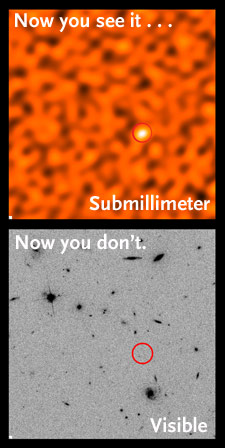 A dust-choked galaxy that's luminous at submillimeter wavelengths gives no hint of its existence in visible light. These images come from the Smithsonian Astrophysical Observatory's Submillimeter Array and the Hubble Space Telescope, respectively.

In 1983 the Infrared Astronomical Satellite (IRAS) unearthed a new class of galaxies that emit the lion's share of their energy at IR wavelengths. Many of these beasts emit as much radiation as a quasar — a trillion times more than the Sun — so astronomers took to calling them ultraluminous IR galaxies. They tend to appear in pairs or groups, so researchers think they're the products of interactions or mergers, which stir things up and turn otherwise ordinary galaxies into blazing cauldrons of star formation.

The ultraluminous IR galaxies that IRAS discovered are in our backyard, cosmically speaking. That shouldn't be surprising, given the satellite's small (24-inch-diameter) telescope and primitive (by today's standards) detectors. Now a team of astronomers using an assortment of much more powerful telescopes with state-of-the-art sensors has found ultraluminous IR galaxies in the very remote, very young universe. Some 12 billion light-years away, these objects emitted the radiation we're now detecting when the universe was barely 2 billion years old.

"It's tough to explain how such bright, massive, dusty galaxies formed so early in the lifetime of the universe," says Josh Younger (Harvard-Smithsonian Center for Astrophysics), lead author of a forthcoming paper in the Astrophysical Journal. Younger's thesis advisor, Giovanni Fazio, says that however they got there, "We are witnessing the moment when the most massive galaxies in the universe were forming most of their stars in their early youth."

You can learn more about this discovery from the Harvard-Smithsonian CfA's press release.