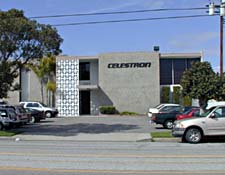 Celestron has maintained its business offices and manufacturing facilities in this building on Columbia Street in Torrance, California, since the mid-1970s.

The world's second-largest manufacturer of telescopes for serious astronomy enthusiasts has a new lease on life following the liquidation of its parent company. Yesterday three senior managers of Celestron International announced that they have purchased the assets of the company, as well as the name "Celestron," from now-defunct Tasco Worldwide. In a statement released yesterday Joseph A. Lupica Jr., Alan Hale, and Richard Hedrick pledged that they will continue to operate the business without interruption from its long-time headquarters in Torrance, California.

Celestron's fate came into question in late May when Tasco, which had purchased the legendary telescope maker in 1998, disclosed that it was liquidating its assets — including Celestron — after defaulting on some $30 million in loans. Lupica and his colleagues immediately entered into negotiations to save Celestron, which began mass-producing large-aperture Schmidt-Cassegrain telescopes in the 1970s. But their efforts were hampered by lawsuits filed by Meade Instruments, also based in Southern California and the world's largest manufacturer of commercial telescopes. The lawsuits allege patent infringement involving technologies built into the two companies' computer-controlled "Go To" telescopes. In addition to acquiring Celestron's material and goodwill assets, the company's new owners and managers have inherited these legal battles, which will likely take years to make their way through the courts.

In the statement published on Celestron's Web site, Hedrick — who will serve as senior vice-president and chief technology officer — says, "This acquisition allows us to continue development of new products and give uninterrupted support to existing products in the marketplace." He adds, "I can appreciate our customers' concerns and share their excitement that Celestron will continue to be a force in the amateur astronomy community."