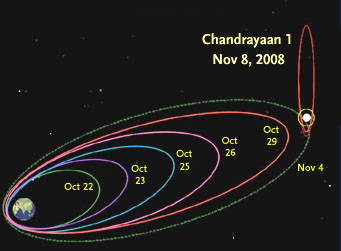 Rather than sending Chandrayaan 1 straight for the Moon following its launch on October 22nd, Indian flight controllers took a step-by-step approach to get the craft to its destination. And today, as it passed with 300 miles (500 km) of the Moon at 11:21 Universal Time, the spacecraft fired a braking rocket for nearly 14 minutes to allow its capture by lunar gravity.

For the moment, Chandrayaan 1 is looping around the Moon every 11 hours in a highly elliptical polar orbit that extends out to some 4,700 miles (7,500 km). Over the next few days, however, additional rocket burns will shrink this to a final orbit just 60 miles (100 km) high. After that observations with an international suite of 11 instruments should commence, beginning with the release of a small Moon Impact Probe. The mission is expected to last two years.

As the ISRO notes in its celebratory press release, India has become the sixth spacefaring power to place a craft in lunar orbit — having followed the lead of the United States, Soviet Union, European Space Agency, Japan, and China.

hi, Chandrayaan, as of now is in a 300km x 7500km polar orbit. the periselene was reduced yesterday. Also, there are some people commenting on "indian and chinese" technology being invented at nasa, which i may point out that even rocketry was brought to american land by Germans. So, it would be better if people read things up and then comment. Indians have developed everything on their own. During the period of sanctions imposed by the USA because of out atomic bomb test in the 80's.

Congratulations to ISRO for this acheivement.
In re. to comment above, First Indian Atomic Bomb Test was in 1974.
India ha been designing aircraft and rockets for some time, including the HF-24 fighter of the 1960s and 1970s and the present day Light Combet Aircraft (LCA) of the present.

Want to know the advantages of "Ladder" method over "Lift"
(Direct) method used to raise Chandrayaan to the Lunar orbit.In direct approch, just one burn of Rockets would have served the purpose. My guess :In the Lift Method Gretaer risk of missing the Gravitational Horizone of Moon might be there and so would be more easily lost eternally.
But that's just a guess. Kindly confirm
Sandeep

As per comment by Sandeep, I'd like to know more technical info about the mission too. So, please, let us know where we can read more about Chandrayaan since on the plain official site they are not available. Thank you to everybody placing comments: they disclose the deep, but latent and silent interst of most of us.