The Kepler mission is on a roll. Launched in 2009, NASA's planet-hunting space telescope has found gobs of exotic worlds orbiting faraway stars. In fact, at a Wyoming conference earlier this month, the Kepler team announced the discovery of 500 exoplanet candidates, beyond the 1,200 in hand as of February, an embarrassment of riches that would make any astronomer smile. 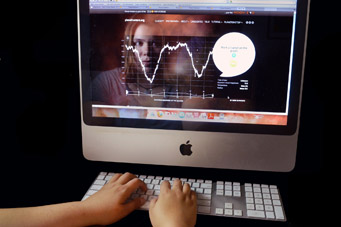 Participants in the Planet Hunters project have made about 4 million light curve classifications with the Q1 and Q2 data from the Kepler Mission.

What's not as well known is that "citizen scientists" are playing a crucial role in this intergalactic treasure hunt. A paper in the Monthly Notices of the Royal Astronomical Society details how volunteers helping with Planet Hunters (a Zooniverse project) might have uncovered the existence of two more exoplanets that automated computer detectors had overlooked. Astronomers now plan to study these candidates more closely.

A third star examined by Planet Hunter volunteers might possess more than one exoplanet. Kepler astronomers are examining the star closely.

Since the program's inauguration in December 2010, Planet Hunter volunteers have been sifting through Kepler's light curves — plots of a star's apparent brightness output over 30 days — for the telltale intermittent darkening that suggests a planet is crossing the star's face.

When a star is flagged by five or more people, the Kepler astronomers take a closer look. Because of the large amounts of volunteers participating in Planet Hunters, and because more than one volunteer can flag an interesting star, no one person gets credit if the star turns out how to have a planet. 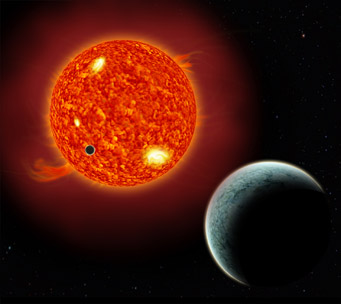 An artist's rendition of a planet transiting in front of a star. The more distant planet has not yet been detected, but most stars with low-mass planets have additional planets.

Since July 2007, Zooniverse has let nearly a half million citizen scientists pool their time and resources to analyze colossal amounts of data that no one scientist could tackle. These volunteers participate in real science studies, whether by classifying the shapes of galaxies, describing craters on the Moon, or finding distant icy objects in the Kuiper Belt for future NASA spacecraft to visit.

"I was skeptical whether the project would work, since computers are very efficient," said Debra Fischer (Yale University), the paper's lead author and a Planet Hunters founder. "But the users are actually amazing. It's astonishing how sophisticated they are."

While computers have helped astronomers make sense of the vast amount of information collected by Kepler, the possible discovery of the two candidates highlights the advantages of having human beings look at data. "Human eyes will remain our best tools for spotting unusual or rare events, some of which will undoubtedly lead to the most exciting discoveries," says Daniel Apai (University of California, Berkeley), an astronomer who studies exoplanets.

Planet Hunters's success also portends the continued role of citizen scientists in astronomy. Because computers are usually good at mining large pools of data for information, scientists are now designing large survey projects. But as Zooniverse has showed, this is exactly the kind of situation in which human eyes are needed.

"I think this is a new model for a particular kind of science," says Fischer.