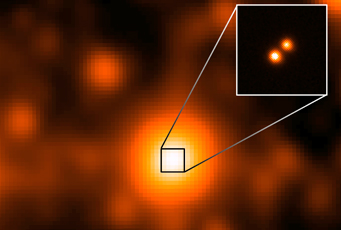 A newly discovered pair of brown dwarfs 6.5 light-years away is breaking records. The brown dwarfs are the closest known, and together they make up the closest star system discovered since 1916. Moreover, WISE J104915.57-531906 (or WISE J1049 for short) displaces Wolf 359 as the third-closest star system to Earth after Alpha Centauri (4.4 light-years away) and Barnard’s star (6 light-years away). Kevin Luhman (Pennsylvania State University) announced the discovery in a letter to be published in April 10th’s Astrophysical Journal.

Technically, the system doesn’t contain stars at all — brown dwarfs are often referred to as “failed stars” because they contain too little mass to sustain the hydrogen fusion by which stars shine. While many undergo some fusion early on, all of them shine by radiating away their internal heat at infrared wavelengths instead of visible light.

The now-hibernating Wide-field Infrared Survey Explorer (WISE) surveyed almost the entire infrared sky from 2009 to 2011, uncovering more than 100 brown dwarfs. A previous WISE study found that hydrogen-fusing stars outnumber brown dwarfs by about 6:1, even in the solar neighborhood, where brown dwarfs were once thought to equal stars in number.

"Now that we're finally seeing the solar neighborhood with keener, infrared vision, the little guys aren't as prevalent as we once thought," comments Davy Kirkpatrick (Caltech).

Most previous surveys found brown dwarfs by their infrared colors, but Luhman took a different approach. He searched for infrared sources in WISE data with high proper motion — the sources appear to speed across the night sky. By measuring an object’s displacement relative to more distant, background stars, Luhman could determine its distance via parallax. This technique, based on simple geometry, allows you to calculate the distance to a finger held steady in front of your face by watching it move back and forth as you close first one eye and then the other.

In Luhman’s case, the baseline was the width of Earth’s orbit rather than the distance between his eyes. He caught a dim but rapidly moving object in the WISE surveys and calculated where he might find it in older images taken between 1978 and 1999 as part of past infrared surveys. The combined detections give a parallax of 0.5 arcseconds, or a distance of 6.5±0.5 light-years, putting the object just past Barnard’s Star. 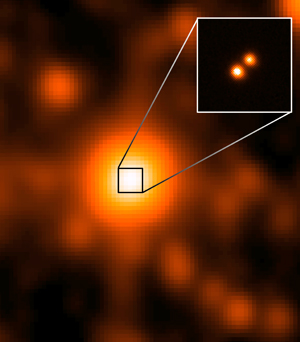 Our neighborhood just got a little more crowded. The two brown dwarfs that make up WISE J1049 lie 3 a.u. apart, and 6.5 light-years away. The pair is the closest brown dwarf system known, and the third-closest star system.

Follow-up data from the Gemini South Telescope in Chile resolved the blurry infrared source into two objects, both brown dwarfs hovering near the transition between L-type and T-type. Separated by three times the Earth-Sun distance, one brown dwarf is about 1.5 times brighter than the other.

“This pair of brown dwarfs is so bright because of its close proximity to us that when I first started examining it, I thought that it was surely too bright to be a brown dwarf,” Luhman says. The pair has gone undetected until now because previous surveys tend to avoid the star-dense plane of the Milky Way.

"It's likely that proper motion surveys will continue to uncover a few more brown dwarfs in the galactic plane," Luhman adds, "as well as objects with unusual colors that would be rejected in a color-based search." 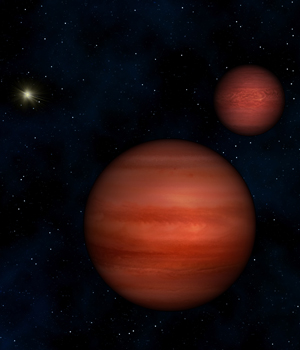 This artist's conception shows the binary brown dwarf system, with the Sun in the background. (The brown dwarfs are actually separated by 3 a.u., so they would probably appear much smaller in each other's skies than shown in the illustration.)

Brown dwarfs are so like the gas giants they outweigh, they have piqued astronomers’ interest as possible exoplanet analogues. And its close proximity makes this brown dwarf pair a particularly tantalizing prospect.

“Giant planets around other stars are very difficult to study directly because the glare from their star gets in the way,” Luhman explains, “but brown dwarfs are often found free-floating by themselves in space, without any glare from a star, making them attractive substitutes for giant planets when studying cool atmospheres.”

A planet orbiting the brown dwarf would be easier to image directly, too, though such planets would likely not host life. Binary systems have a harder time making planets in stable orbits, but the possibility of planets orbiting either one or both brown dwarfs is far from impossible.

The search for brown dwarfs is far from over — the project AllWISE will combine data from WISE’s all-sky surveys to search systematically for nearby fast-moving objects, such as WISE J1049, as well as faint objects from the distant universe. AllWISE data will be available to the public in late 2013.

Shari Balouchi is a sophomore pursuing a Physics/Astronomy minor at Sewanee: The University of the South and writes an astronomy column for The Sewanee Purple a student-run newspaper on campus.

Nice first article Miss Balouchi. I wonder what accounts for the shortage of brown dwarfs? Planets apparently outnumber stars, so one would think that an intermediately sized class of objects would fall somewhere in the middle, but that doesn’t seem to be the case. It seems that the universe produces enough of them that a few examples are conveniently at hand for study, but there’s not so many of them that they would impose a common threat to habitability by way of close encounters with any habitable planets orbiting real stars. The anthropomorphic principle at work perhaps?

Very nice article. Seems like the universe is continuing to provide surprises. Perhaps other Brown Dwarves will be found using other detection techniques. Perhaps Luhman's approach is good for detecting some types of Brown Dwarves and other techniques will find additional ones?

So,has anyone made radial velocity measurements of these two stars? It may be easy to detect planets by that method, because of the brown dwarfs relatively light weight. And I assume this would also determine the masses of both stars.

Can brown dwarfs generate enough heat to warm an explanet orbiting nearby enough so that the exoplanet coule support life?

I'm impressed that this report was written by a college sophomore pursuing a minor in physics and astronomy. Wow, you're already getting published in your minor field. Good work!

Wow Richard, what a quick affirmative to you’re RV question. The article mentioned direct imaging for planet detection, but since a planet orbiting a brown dwarf(s) receives next to no external heating (the answer is no, John) the only surface heating for a brown dwarf’s planet would be what comes up from its interior. Since planets are smaller that BDs and they would cool faster wouldn’t it be very hard to image one directly?

This article and the new information sparks the thought anew that our Sun could be the primary of a binary system. What precludes a brown dwarf from being in a distant orbit around our Sun? It would, of course, follow a very distant orbit track or one that is very elliptical. By comparison, the Kuiper Belt Object Sedna follows an orbit that brings it to within 50 AU while its aphelion is on the order of 500 AU.

If a brown dwarf companion to our star were to exist and follow an orbit similar to or more distant than that of Sedna, it would have escaped our detection methods to date and have been outside our awareness throughout all of modern science. But perhaps a brown dwarf with planets (and myriad asteroids) in orbit around it has made close approaches to the inner solar system in the past.

The concept that our solar system may have a large undiscovered component is a very intriguing concept. For a Jupiter-mass object, approximately how distant from the Sun would it need to be in order to have remain undetected thus far? I am certain such an object residing in the Kuiper Belt would be relatively easily detectable, seeing as how "bright"
Pluto is, and it's on the leading edge of the Kuiper Belt. Plus, any massive object there would produce obvious gravitational perturbations. However, a Jupiter-mass object in the Oort Cloud at, say, 70,000 AUs (about 1 light-year), would be extremely difficult to detect, I would think. And perhaps such an object could have propelled comets like ISON and PanSTARRS toward the Sun?