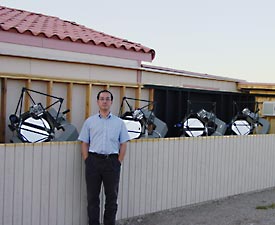 Canadian amateur astronomer William Kwong Yu Yeung, one of this year's winners of the Edgar Wilson Award for amateur comet discovery, is shown with the 0.45-meter Centurion 18 telescopes at his private observatory in Benson, Arizona. Yeung won the prize for discovering periodic comet P/2002 BV on CCD images obtained from his observatory.

Anyone who thinks that the era of comet discoveries by amateur astronomers is over needs only to look to this year's batch of Edgar Wilson Award winners for proof that it's still possible for amateurs to bag visitors that professional automated sky surveys have missed.

Established in 1998 following the wishes of American businessman Edgar Wilson, the prize is given to amateur astronomers who find one or more comets using amateur, privately owned equipment. (Comets discovered by amateurs using spacecraft data, such as from SOHO, don't qualify.) While the exact cash amount is determined annually by the award's trustee, in 1999 it was worth about $20,000.

Last year only two amateurs shared the award — Utsunomiya and Albert Jones (New Zealand) — for their codiscovery of C/2000 W1. Of the 20 awards given out for the discovery of 15 separate comets, 12 were awarded for objects found visually, seven were for those found in CCD images, and one from a photograph. The U.S., Japan, and Australia lead the award count with four discoveries each from their respective soils.