Comet ISON to Fly By Mars

On October 1st, Comet ISON will pass closer to Mars than it ever will to Earth. The Red Planet’s rovers and orbiters are ready to send home postcards of the event. 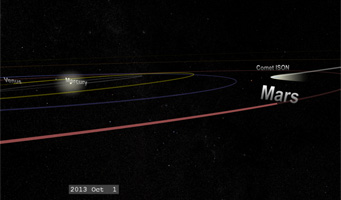 In one week the (in)famous Comet ISON will make its closest approach to Mars, flying just 10.8 million km (6.7 million miles) from its surface on October 1st. All Martian eyes will be watching, including Curiosity’s, though a postcard-perfect picture is far from guaranteed.

Curiosity and Opportunity will both be watching as ISON passes overhead, but the most likely detection will come from the HiRISE camera aboard NASA’s Mars Reconnaissance Orbiter. That camera resolves 1-meter (3-foot) features on the Martian surface, but the unprecedented sharpness of its daylit landscapes doesn’t necessarily mean it will do well on a dim glow in darkest space several million km away. NASA already planned a test observation for August 20th, and unfortunately (but not unexpectedly), Comet ISON remained just below the detection threshold.

“For missions like MRO that are designed to look at a planet around which they are orbiting, turning their instruments in the opposite direction and trying to detect a fuzzy iceball is not something that’s done on a whim,” writes Karl Battams on the Comet ISON Observing Campaign blog. “It has to be meticulously planned, prepared for, and tested.” 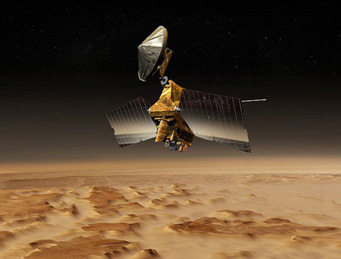 The Mars Reconnaissance Orbiter, sailing some 15,000 miles above the Red Planet's surface, will attempt to capture Comet ISON's close passage.

MRO is also planning to look during another three observing windows: on September 29th, and October 1st and 2nd. Mars Express was scheduled to start looking yesterday (September 23rd), and the Swift spacecraft’s Ultraviolet/Optical Telescope will take observations on October 1st. For the full list of planned professional observations of Comet ISON, see CIOC’s Observation Calendar.

Regardless of how the observations of Comet ISON turn out next Monday, they promise to be good practice for Comet Siding Spring, which will come 216 times closer (within 110,000 km of the Red Planet) in October 2014.

The Mars flyby is the first of several close encounters: