It's extraordinary how so much can change in a short time. Recently I visited Acadia University, the school that provided most of my undergraduate education between 1968 and 1972. 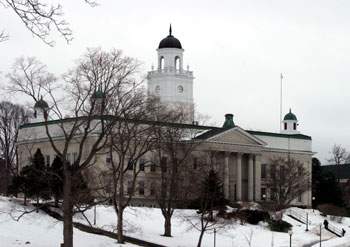 Outwardly, many of the buildings at Acadia University in Nova Scotia look the same today as they did when the author was a student there in the late 1960s and early '70s.

"You'll find that a lot of changes have taken place," warned my friend Roy Bishop. He was right. Although all the buildings were still there, some had changed so much that I couldn't recognize them!

My professional reason for visiting was to present two public lectures: one for the English department titled "More Things in Heaven and Earth: Exploring the Relationship between Literature and the Night Sky," and the other for the physics department called "Making Science Make Sense." Both presentations shared a common theme of helping make the night sky and literature more accessible. I also enjoyed visiting a class of physics honors students.

In planning my lectures, I recalled an article in the December 21, 1968, Saturday Review titled "The Building, the Barometer, and the Ingenious Student." It told of a student who answered the question on a physics test about calculating the height of a building with the aid of a barometer, by writing that you should go to the top of the building, attach a long rope to the barometer and throw the barometer off the building. The length of the rope that followed the barometer over the side would give the height of the building. The instructor gave him a zero, but later agreed to let the student answer the question again, showing that he had an understanding of physics.

The student's final response: Knock on the door of the building's superintendent. When he answers, tell him that you have a wonderful barometer and that if he tells you the height of the building you’ll give it to him.

My point in telling this story was that in order to discover nontraditional university subjects, like the night sky, students need to be able to think freely and search for unconventional solutions to problems. Going outside to discover the night sky is a vocational activity whose results are unknown, and questionable: a student might not gain anything from the exercise. But in 1968, I thought that it was worth the risk, and it opened up the heavens for me.

I spent many hours under the dark skies just south of Acadia, including one night during which I completed almost 10 hours of comet hunting. I also remember walking through Wolfville one evening in 1970 with a cassette player, not a telescope, in hand. I walked eastward across town, turned left, crossed some railroad tracks, then turned right onto the dikes. Some of these earthen structures date back 200 years to Acadians who constructed them before being expelled by the British in 1755. They are designed to keep tidal waters of the Minas Basin away from the rich farmlands of the Nova Scotian interior. But that night they had a different purpose — to keep my sky dark and pristine. As I walked along I pressed the play button, and suddenly my stroll was enlightened by the gentle melody of Beethoven's Moonlight Sonata. Near the end of the first movement, the clear sky was suddenly enveloped by fog that continuously formed and dissipated, allowing me a constantly changing view. I've never forgotten that experience.

It has been more than 40 years since I was a student at Acadia, and 12 since my last visit. The students studying there now are at least as enthusiastic, and maybe more so, than those from my generation. It's my hope that this remarkable place continues to stir them as it inspired me.

"The student" in this article was none other than Niels Bohr.