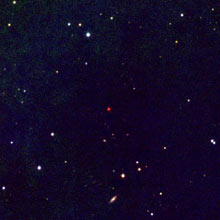 Hiding just 19 light-years away in the constellation Eridanus is the least-hot star ever observed. The Jupiter-size brown dwarf known as 2MASS 0415–0935 has a surface temperature of a mere 410° Celsius (770° Fahrenheit), only a few hundred degrees hotter than your oven cooking a roast and cooler than a glowing coal. By comparison, our Sun blazes at 5,500°C. The previous record-holders for the coolest known brown dwarfs are about as warm as 700°C.

The discovery, announced yesterday at the American Astronomical Society meeting in Seattle, was made by Adam Burgasser (University of California, Los Angeles) from infrared data collected by the Two-Micron All-Sky Survey (2MASS). Frederick J. Vrba (U.S. Naval Observatory) used the 1.55-meter Kaj Strand Astrometric Telescope in Flagstaff, Arizona, to follow up on the 2MASS discovery by determining the distance to the object by measuring its parallax. Its distance and observed brightness gave its true luminosity, and by combining that with the size expected for such objects, Vrba deduced a temperature.

The big accomplishment was finding 2MASS 0415–0935 at all. "Because this object is so cold, it emits very little light," says Burgasser. It glows with only 1/500,000 the luminosity of the Sun, almost entirely in the infrared.

Along with its low temperature and small size, 2MASS 0415–0935 shows the spectral signatures of methane and water vapor in its atmosphere — characteristics of the coolest known dwarfs, those of spectral class T. Brown dwarfs don't generate heat of their own, as true stars do. They retain only their original heat of formation, gradually radiating it away with time. The original amount of heat, and the speed of cooling, depend on a brown dwarf's mass.

The new object may have a low enough mass to fall in the range of what astronomers usually call giant planets. It doesn't orbit any other body, however, suggesting that it formed more the way that stars do. But the possibility exists that astronomers have uncovered a young planet ejected from some solar system, still warm and wandering alone.

Defining these borderline bodies is "not so obvious since these objects have the same masses, chemical compositions, and radii as planets," says Vrba.

Further observations by Vrba's team will try to pin down the object's distance, and thus temperature, to greater precision. Follow-up observations of additional cool 2MASS stars are also planned.