Astronomers have created the most realistic computer simulation of the universe’s evolution to date, tracking activity across 13 billion years of cosmic history.

The light we see from distant galaxies takes millions to billions of years to reach us, allowing astronomers to study the universe in its infancy. But while advancements with the Hubble Space Telescope and others have shed light on our origins, a detailed understanding of the evolution of the universe through observations alone is a rather daunting task.

So researchers use advanced computer simulations to create their own mini-universes. By unleashing the laws of physics within supercomputers, they can study the universe’s evolution and match simulated galaxies to those observed in the real universe.

“The novelty of our model lies in the combination of the physical size of the simulated universe, the details we resolve inside it, and the accuracy with which we model the key physical processes that shape the large-scale structure and [smaller] galaxies in the universe,” says coauthor Shy Genel (Harvard-Smithsonian Center for Astrophysics).

The Universe in a Box

The researchers began their model from initial conditions resembling the very young universe 12 million years after the Big Bang. They then unleashed complex physical laws — the gravitational pull of matter, the chemical processes in diffuse gas, radiation and magnetic fields, as well as the physics of star and black hole formation— onto their simulation, allowing it to evolve for 13 billion years.

Accounting for normal matter and the complex physical laws surrounding this matter allowed the team to take their models a huge leap forward. Previous simulations had accounted primarily for dark matter, severely limiting their potential to match observations.

The team found their results matched the observable universe remarkably well. Surprisingly, the authors found that including supernova explosions and super-massive black holes in their calculations was crucial to obtaining a model galaxy population that resembled real galaxies.

They were able to reproduce a wide range of observable properties, including the present day ratio of the amount of stars to dark matter for galaxies of all masses. So while huge uncertainties remain regarding the nature of dark matter and dark energy, the simulation clears a number of the hurdles facing the standard cosmological model — which posits that these mysterious entities constitute the bulk of the universe’s content.

This "motivates us further to continue searching for the elusive dark matter and dark energy to understand their true nature,” says Genel.

A big challenge for dark matter simulations has been recreating the variety of galaxies we observe in our universe. The Illustris simulation succeeded in producing spiral galaxies like our own Milky Way. But, like previous simulations, it still struggled to produce realistic low-mass galaxies. These smaller galaxies formed far too early in the simulation, ending up with prematurely aged stellar populations — stars two to three times older than what observations show. Other simulations working on smaller scales have successfully reproduced the delay in star birth, but they only look at an individual galaxy and its immediate neighbors, not the large-scale cosmic structure that Illustris does.

A Model to Mine for Years to Come

Illustris's simulated volume contains 41,416 galaxies covering a wide range of masses, shapes, and sizes. It’s only a pie slice of the cosmos, but it required supercomputers in France, Germany and the U.S. Had the researchers used a single desktop, the simulation would have needed to run for 500,000 years.

“Our model universe is so large and so detailed that it takes about half a petabyte (1000 terabyte) of data to describe it,” says Genel. “We, and other astronomers across the community, will mine these data for years in order to learn about almost every aspect of galaxy formation. Understanding galaxy formation is a big endeavor that will eventually allow us to understand the origin of our own Milky Way galaxy, as well as its fate in the future.”

Gas cannot clump, except by radiating away gravitational and thermal energy. Dark matter, by definition, does not radiate, so it clumps very inefficiently, which is why it appears mostly in galactic halos. Theses simulations start with dark matter already in clumps. How did that happen? In the race to clump, they show, quite nicely, the hare (visible matter) racing past the tortoise (dark matter), but how did the tortoise get so far ahead of the hare in the first place?!?

Two things. It is quite fascinating that the "universal structure" has been compared with a tree!
The old Norse religion believed that a tree was the basic structure of the universe, just as the double spiral was a sacred symbol to the Megalith builders of Stonehenge and New Grange. Makes you wonder a bit doesn't it?
Peter Wilson suggests yet another good argument against the "Dark matter" theory. I often wonder if modern theoretical scientists have ever heard of Occam's Razor the way they pile theory on theory like a house of cards.

So far no one including some cosmologists I have spoken to have been able to account for the weird distribution of this "stuff". But one thing looks certain. It is a scalar effect, the bigger the chunk of the universe you examine the more there seems to be.
To me that looks far more like the effect of some kind of field rather than clumps of undetectable matter.

It's the law of inertia that keeps the Moon from crashing down to Earth, and it has for billions of years. On Earth, if you drop something, it falls, because it has lost its inertia wrt the Earth. But in space, that doesn't happen. When an astronaut drops something on board the ISS, it doesn't fall. The law of inertia presumably applies to dark matter. Like the tool let-go-of on the ISS, dark matter is not going to fall together just because radiation is not holding it up. 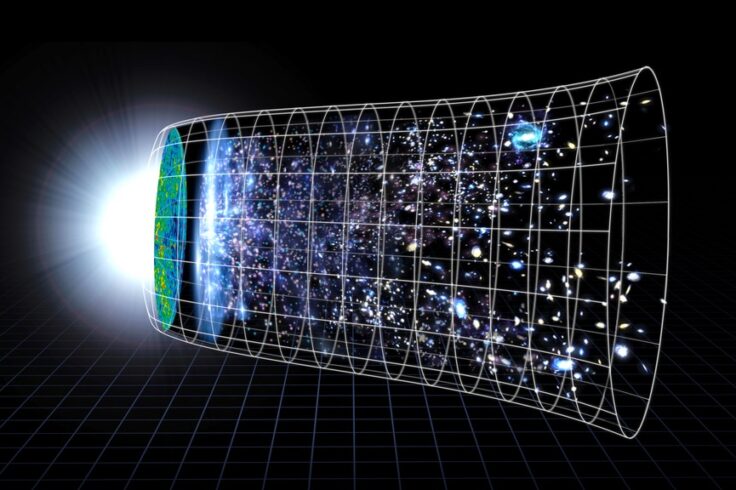 No Release for the Hubble Tension

Twisters in the Cosmic Web 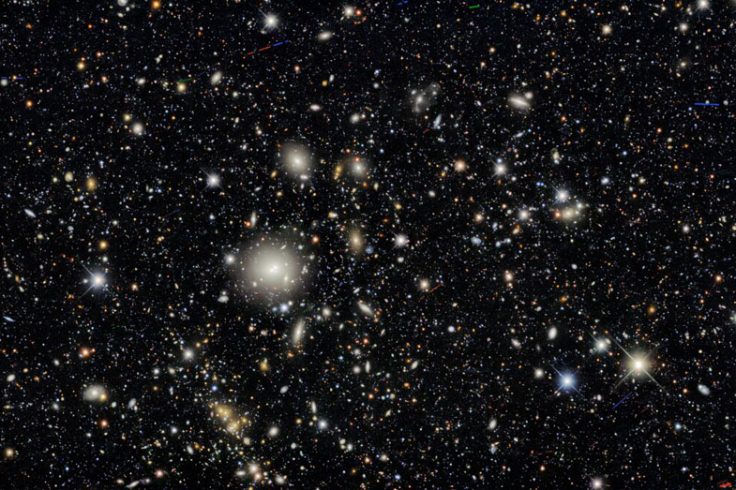 New Studies Agree: The Universe Is Expanding Faster Than Expected 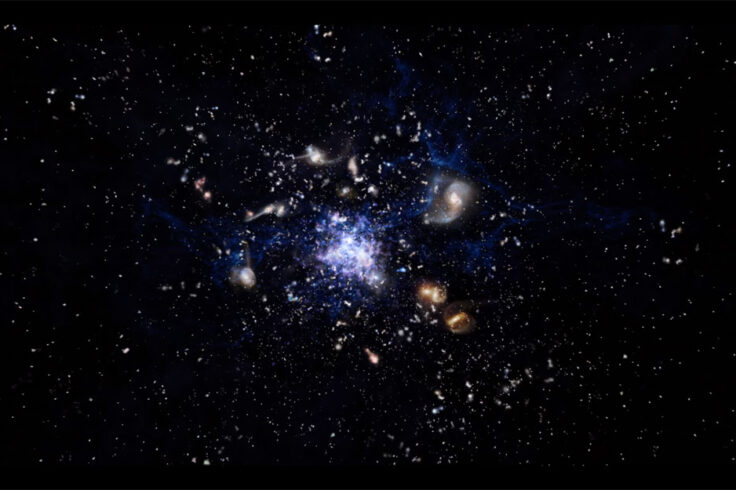 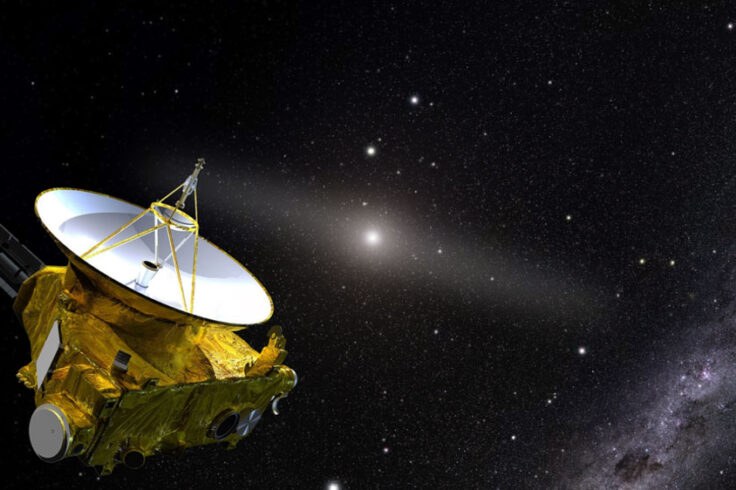 What New Horizons Found in Deep Space — And Why It Matters 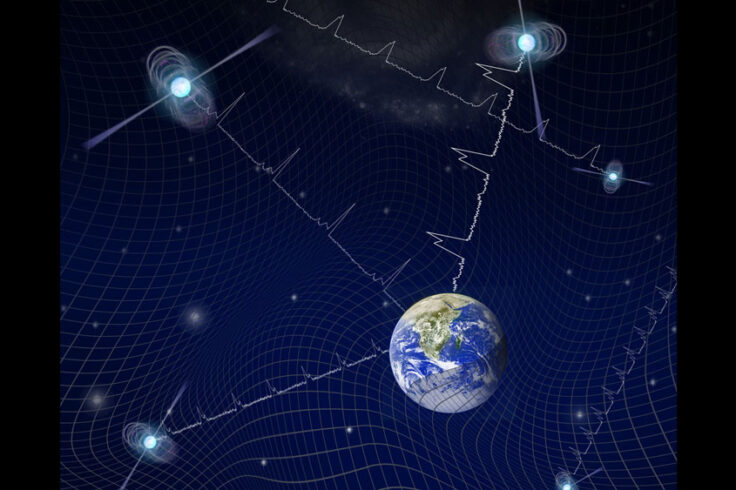 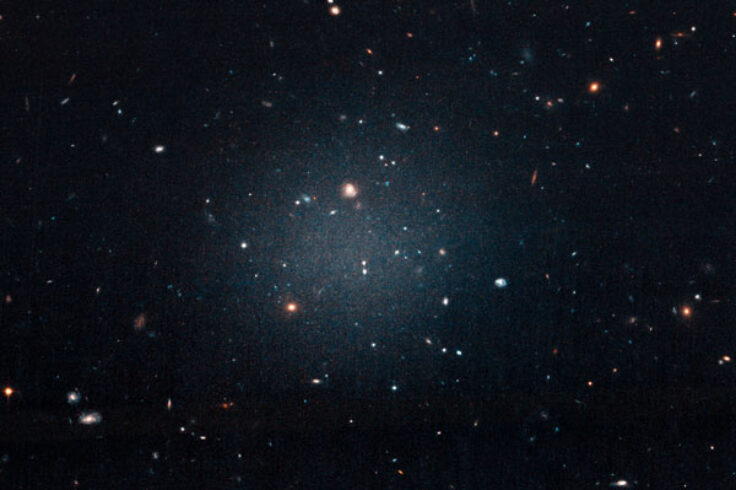