Curiosity Gets a Whiff of Organic Matter

The rover Curiosity has detected simple organic molecules in samples of Martian sand, but they're almost certainly byproducts of the testing process. 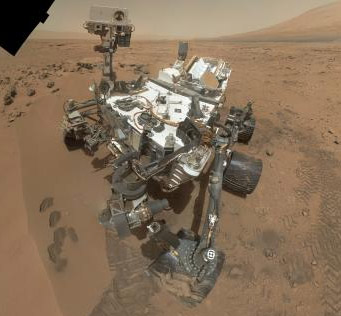 NASA's Curiosity rover used a camera on its arm to record this self-portrait during its seven-week stay at the "Rocknest" site on Mars. At lower left are scoop marks made during sampling tests. Click here for larger versions.

It's been four months since the Mars Science Laboratory, a.k.a. Curiosity, landed inside Gale crater on Mars. Although the craft's science team has urged patience as they put the rover through ever-more-complex activities, the public is growing increasingly eager to see some boffo results from NASA's $2½ billion investment. So the Web was understandably abuzz this past week with hints that mission scientists would announce Something Big at this week's American Geophysical Union meeting in San Francisco.

They did, and yet they didn't.

The good news: Curiosity is working exactly as designed. For several weeks, it's lingered at a site called Rocknest to make sure its sample-handling mechanisms are working and to analyze a few dabs of carefully prepared sand. The grains that go down the chute can't be any larger than 150 microns across, finer than granulated sugar but coarser than ground flour. 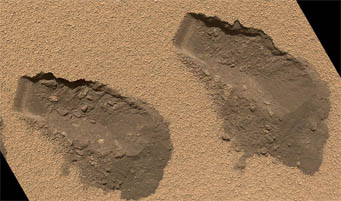 The Martian rover Curiosity made these scoops in the fine sand at the Rocknest site in October 2012. Each gouge is about 1.6 inches (4 cm) wide. The topmost surface of the drift is covered by coarse sand grains with a thin coating of bright dust, whereas the material lower down is darker. Click here for a more detailed view.

A few weeks ago the CheMin instrument used X-ray diffraction to determine that its first delivery of this fine-grain material consists of standard-issue rock-forming minerals such as feldspar, pyroxene and olivine, along with abundant volatile elements like sulfur.

Now attention has turned to the rover's most sophisticated instrument, called Sample Analysis at Mars, which actually has three parts. One uses a mass spectrometer to determine the molecular weight of gases — either in the Martian atmosphere or the ones releases as a solid sample is gradually heated to higher and higher temperatures. A second component assays how much water, carbon dioxide, and methane are in a sample and the ratios of isotopes in those molecules. The third section, a gas chromatograph, will look for various organic molecules. 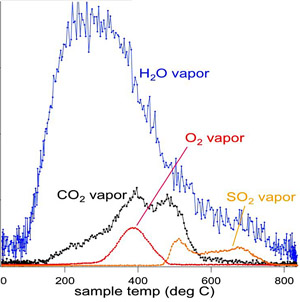 This plot shows the variety of gases that were released from Rocknest's sand grains when gradually heated in the Sample Analysis at Mars instrument, or SAM, aboard NASA's Mars rover Curiosity.

SAM found that the powder from Rocknest released water vapor, oxygen, and sulfur dioxide when heated. But that's nothing new — these results match the compositions of the dust found elsewhere on Mars by previous rovers and landers. Still, notes Paul Mahaffy, principal investigator for SAM, "We consider this a terrific milestone." The water vapor, for example, probably came from hydrated minerals like clays.

The instrument did identify some simple organic molecules, variations of methane (CH4) in which chlorine atoms have substituted for one or more hydrogen atoms. But there's a huge caveat: it's very unlikely that chlorinated methane actually exists on Mars. Instead, SAM's tiny ovens probably caused perchlorate molecules (found commonly in martian dirt) to release lots of chlorine and oxygen as they broke down.

One of Curiosity's instruments, called Sample Analysis at Mars (SAM), has detected forms of the simple organic molecule methane with up to three chlorine atoms (green) substituting for hydrogen atoms (white). These compounds likely are artifacts of the testing process and not indigenous to Mars.

"We have no definitive detection of Martian organics at this point," Mahaffy says. It's not clear yet where the carbon comes from — perhaps it's derived from carbonates in the Rocknest sample, or it could be traces of carbon-based contamination carried from Earth.

Potentially more interesting is SAM's determination that the derived water vapor is highly enriched in hydrogen's "heavy" isotope, deuterium. The D:H ratio is more than five times that in Earth's seawater. The thinking goes that, over the eons of history, molecules of water vapor have been broken down by ultraviolet sunlight high in the Martian atmosphere, and the lighter hydrogen atoms have preferentially escaped to space. In principle, this five-fold deuterium enrichment can be used to figure out just much water has been lost. It's also possible that Curiosity will eventually unearth a sample of "old" water — locked up in an ancient rock layer — to reveal how the atmosphere has evolved over time.

All this scratching and sniffing takes time, cautions project scientist John Grotzinger. Plans call for Curiosity to be maneuvered to an overlook called Point Lake before heading for a tantalizing outcrop called Yellowknife. Getting the rover to its primary objective — the ancient sediments at the base of "Mount Sharp" (officially Aeolis Mons) — would appear to be many weeks away.

Third paragraph: "finer than granulated sugar but coarser than ground flower" should be "flour".

Fourth paragraph: "minerals such as feldspar, pyroxene and olivine, along with abundant ." Abundant what?

Thanks Kelly for this informative summary and for putting this report in the context of further mission plans. I know you write for S&T in addition to your day job, and I appreciate your timely reporting.

Third paragraph: "finer than granulated sugar but coarser than ground flower" should be "flour".

Fourth paragraph: "minerals such as feldspar, pyroxene and olivine, along with abundant ." Abundant what?

Thanks Kelly for this informative summary and for putting this report in the context of further mission plans. I know you write for S&T in addition to your day job, and I appreciate your timely reporting.

This kind of writing with all of the flaws of editing and the open questions and silly asides, (scratching and sniffing?) is why I no longer subscribe to S&T. The article tells us nothing, it is just confusing. Are the chlorinated methanes real or just artifacts of the process?, why be so confusing?, the temperatures at which they were volatilized would be indicative of which is true. The same with the carbon isotopes, the temperature profiles of the gas produced would be indicative of what mineral or source the carbon came from. The most important and critical indicator is what isotope was the carbon. C12, C14? The carbon isotopes can be discriminated by SAM, thats where the story is here. This is a sophisticated experiment, how about using some sophistication in reporting the results?.The DH ratios are not necessarily from atmospheric evolution either, arent the neutron fluxes rather high on the planet's surface?, if so the DH abundance could be thus explained. John

John: ouch! yes, the typos are mine alone and I've fixed them (thanks, Anthony). but I'm simply reporting the preliminary and incomplete results that were presented. (see for yourself: http://www.ustream.tv/recorded/27478475) for example, the chlorinated methane is clearly a pyrolytic byproduct. as I note, the chlorine surely comes from perchlorate in the soil, but the carbon is from an unknown source. it could be Martian (from CO2, for example) or from a terrestrial contaminant. the SAM scientists don't know the source yet. as for 12C/14C ratios, SAM contains an oxygen reservoir that can be added to pyrolized carbon to create CO2; that in turn can be analyzed to get at those isotopic abundances. none of that has been done yet.

In defense of S&T: Finding life on Mars is about as likely as finding Jimmy Hoffa, but it’s what the public wants, and it’s the reason for the billions of dollars spent on the mission. Scientists being scientists, they are not going to make extraordinary claims w/o extraordinary evidence. The tentativeness of Kelly’s article is probably a good reflection of the state of the science at this point.

John, if you're still reading this comment thread, I have a very different opinion of S&T in general and Kelly's reporting in particular. I'm not a scientist, I'm a clinical social worker -- skywatching and astronomy is a hobby. Whenever I see a story in the popular media about a new exoplanet, distant galaxy, or the latest finding from a rover on Mars, I look forward to reading about it here on skyandtelescope.com and later in the magazine, because I know the science will be explained clearly and accurately, along with all the of the uncertainty and differing interpretations. As a non-specialist I rely on S&T to expand both my depth and breadth of understanding, and so far I have not been disappointed. Kelly -- have you ever been to a professional sporting event? Have you noticed that the stands are full of experts who are smarter than the coach, and athletes who could run circles around the players on the field? 😉

At the start they said No life on Mars, then they though of some microbial life, then now they find organic matter: I say to them: Mars is full of flowing water in all forms: oceans, seas, lakes and rivers. And full of plants and vegetation. And full of various kinds of animals, and many races of people: the Martians.

John, although I did read Kelly’s article before the editorial corrections I agree with Peter and Anthony. You were being far too harsh on Kelly Beatty, who’s writing has often been praised by many in these blogs about his articles. True, to use Anthony’s sports analogy Kelly may have been off his game a little with what was first submitted, but IMO he is a fine writer who very much deserves to be in the line up.