Diehard space junkies know that nothing beats seeing a rocket blaze to life, leap from its pad, and roar into space. 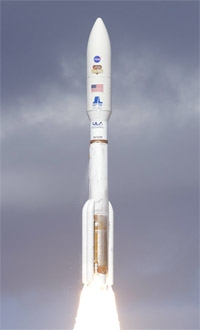 Curiosity heads for space atop an Atlas V rocket and Centaur upper stage during a flawless launch from Florida on November 26, 2011.

So thank you, NASA, for this morning's picture-perfect launch of Curiosity, a.k.a. the Mars Science Laboratory. After a one-day delay due to a minor equipment issue, the spacecraft left Earth atop an Atlas V booster at 10:02 a.m. Eastern Standard Time (15:02 Universal Time). Less than 40 minutes later, two firings from a Centaur upper stage had propelled Curiosity to nearly 23,000 miles per hour (10.2 km per second) and freed it from Earth's gravitational grip.

The spacecraft will coast about 350 million miles (565 million km) over 8½ months to reach its destination, with touchdown planned for early on August 6, 2012.

About the size of a small car and weighing one ton (900 kg), Curiosity is far and away the most massive spacecraft ever built to roam the Martian surface. In a post-launch briefing, Doug McCuiston, director of NASA's Mars-exploration program, likened Curiosity to the "monster truck of rovers". Its 10 scientific instruments alone total 165 pounds (75 kg), compared to the 23-pound (11-kg) total mass of Sojourner, the first Martian rover, which piggybacked on Mars Pathfinder in 1997. 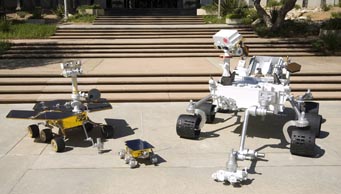 Weighing about a ton, the rover Curiosity (right)) is far larger than its predecessors Spirit and Opportunity (left)), which reached Mars in 2004; and tiny Sojourner (center)), which landed in 1997.

Nothing the size and mass of Curiosity has attempted to land on Martian surface before, and NASA engineers have resorted to an entirely new approach — called the Sky Crane — to get it there intact.

After decelerating through the thin Martian atmosphere in a protective shell, the lander will pop free and parachute to an altitude of about 6,000 feet (1.2 km). Then eight engines will fire, slowing the descent to a hover. At a point about 65 feet (20 m), cables will extend from the rocket platform to lower the lander to the ground. At touchdown, the cables are cut and the descent stage flies off to separate itself by at least 500 feet (150 m).

Let's be clear: Curiosity will not search form present or former life on Mars. Instead, once it sets down inside Gale crater, the craft will try to sort out whether Mars has ever put out the "welcome mat" for life. Likely at least 3½ billion years old, Gale has a massive layered mound at its center that rises 3 miles (5 km) above the crater floor. Orbital reconnaissance suggests that layers within the mound were laid down over a broad swath of Martian history — with old strata rich in clay minerals near its base (just 1,000 feet above the crater floor) and sulfates above those. Plans call for Curiosity to trundles up the mountain's slope for at least a full Martian year (23 months), which should afford an opportunity to sample sediments laid down throughout much of Martian history. 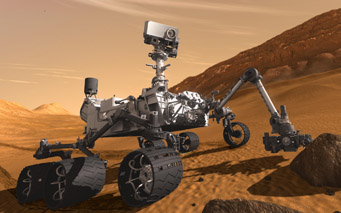 This artist concept shows Curiosity, NASA's Mars Science Laboratory, examining a rock outcrop with a set of tools at the end of its 7-foot-long robotic arm.

Curiosity is a rolling geochemistry lab, able to ingest samples of pulverized rock to determine their true composition, probe the ground beneath it for the presence of water, and sniff the thin air for traces of methane (a byproduct of both biological and inorganic processes that mysteriously appears from time to time in the Red Planet's atmosphere).

For more details, check out Emily Lakdawalla's feature article about the mission in the December issue of Sky & Telescope, and click here to listen to editor-in-chief Bob Naeye's interview with geologist Joy Crisp, the deputy project scientist.

Aside from all the dramatic findings likely to come from this mission, I can't wait to see the first use of ChemCam, the chemistry-and-camera unit mounted atop Curiosity's 7-foot-high mast. ChemCam's powerful laser will zap preselected spots on nearby rocks and then use a telescope-aided spectrometer to analyze the resulting pulse of light and determine the rock's composition. Zap! Pow! Wow!

Utah amateur Patrick Wiggins captured the Mars Science Laboratory's departure from Earth on the morning of November 27, 2011, one day after its launch. He used a 14-inch telescope and SBIG ST-10XME camera for this 43-minute-long sequence, during which the spacecraft's distance averaged 182,000 miles (293,000 km). The field, 9 arcminutes square, is near the juncture of Monoceros, Hydra, and Canis Minor.

Another spectacular result should come from a high-definition camera on the craft's underside that will snap five full-color frames per second from just before the heat shield separates (4 miles up) until touchdown.

This will be an important mission — as much for the high political stakes within NASA as for science its team members hope to obtain. Curiosity did not have an easy time getting from the drawing board to the launch pad. In 2004, when work began in earnest on the spacecraft, NASA managers estimated that the project would total about $1 billion. But technical and budgetary difficulties mounted, forcing some scientific capabilities to be jettisoned as the team attempted to reign in costs.

The mission's escalating problems were at least partly to blame for the abrupt March 2008 resignation of Alan Stern, a planetary scientist who'd been put in charge of the space agency's science efforts less than a year before. By December, it became clear that the spacecraft simply wouldn't be ready in time for its planned 2009 launch. Worse, the mission's total price tag is now estimated at $2½ billion.

NASA managers and project team insist that Curiosity will return big scientific dividends on that investment. Let's hope they're right about that.

Landing on Mars isn't easy! Glimpse back into recent history with our FREE ebook: Mars Landings, Past & Present, and find out why so many attempts to land on the Red Planet went awry.

The sequence of events in the animation linked to in "Sky Crane" aren't quite correct. The actual sequence is: The descent stage separates from the backshell, then the engines fire, then at the proper altitude the rover is lowered on the bridles, then the wheels deploy. This animation shows the correct sequence:
http://www.youtube.com/watch?v=P4boyXQuUIw

Sloppy for a science journal. 900 Kg doesn't change between planets, it's mass. Weight does. It will weigh substantually less on Mars.

Tom: thanks for pointing out those discrepancies in the landing sequence. I've corrected the link.

People who live in glass houses...I saw the typo, went back to correct "substantuially" and couldn't get my cursor to blink where it was, tried a delete and thought I got the right letter. 🙂

After nearly 40 years of landing on Mars I wonder when will science determine that live did not evolve on Mars? And by evolve I mean life arose via spontaneous generation from non-living matter via random particle collisions. 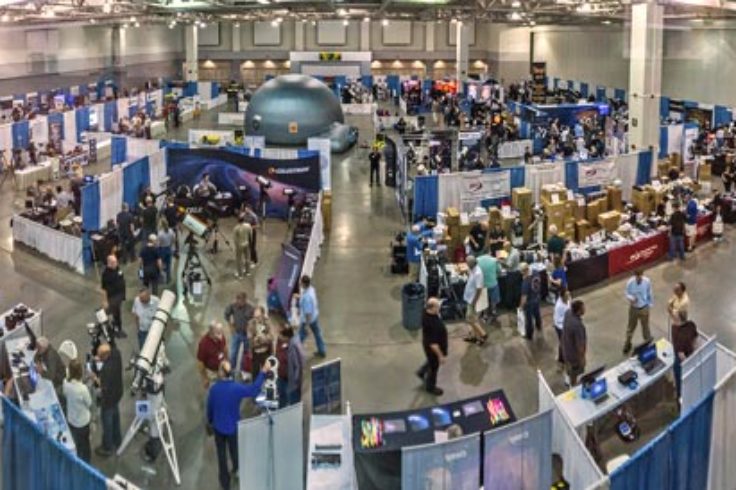