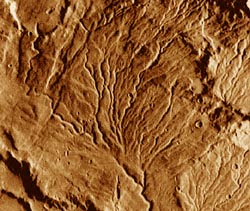 Complex valley networks, common in Mars's southern hemisphere, hint that precipitation fell from the sky early in the planet's history, after which rivulets of runoff created treelike surface patterns. But did the precipitation fall as rain or snow? This well-developed network, seen in a colorized image from the Viking 1 orbiter, is about 100 kilometers across.

The red planet does not lack for water in its frozen state. Great swaths of the Martian surface appear to be underlain by ice-impregnated dirt, and a fresh look at data from NASA's 2001 Mars Odyssey spacecraft concludes that the planet may have stashed even greater amounts of ice than first thought. According to William V. Boynton (University of Arizona), subsurface regions surrounding Mars's polar caps may contain at least 70 percent ice by volume — the equivalent of buried glaciers.

But when it comes to the role that water has played throughout its history, Mars is sending planetary scientists mixed signals. Billions of years ago parts of the Martian landscape were scoured and gouged by immense floods, and some evidence suggests that a large ocean once inundated the northern lowlands. Yet a thorough search by NASA's Mars Global Surveyor has failed to turn up the deposits of carbonate rock that should have been created by the interaction of water and the carbon dioxide in Mars's atmosphere.

The most persuasive pieces of evidence that early Mars was warm and wet, at least briefly, are the elaborate drainage patterns seen scattered throughout the planet's ancient highlands. These valley networks appear to be river systems that channeled runoff from heavy precipitation. But where did the water come from?

Maybe, argue a team of atmospheric scientists, it rained buckets on the young Mars following every major impact — then the climate reverted to frigid, dry conditions in between. At a meeting of planetary scientists this week, Anthony Colaprete (NASA/Ames Research Center) detailed how planetwide downpours could be triggered by the collision of an asteroid or comet at least 10 kilometers across. The impact’s energy would quickly vaporize all the ice buried in the target zone. It would also choke the entire atmosphere with white-hot ejecta that would heat the surface to at least 1,000° Kelvin, vaporizing even more buried ice. As the water-saturated atmosphere cooled, Colaprete argues, rain — and lots of it — would be inevitable. Some regional downpours might dump more than 2 meters of water over several weeks, while other areas would hardly see a drop. Within a few months the atmosphere would return to normal, ending the rains until the next impact occurred.

This computer model, which builds on work that Teresa L. Segura (NASA/Ames), Colaprete, and others published in Science last year, assumes that most of the action took place around 3½ billion years ago, when the bombardment rate was high and Mars likely had an atmosphere dense enough to keep the surface from cooling too quickly. The valley networks, Colaprete explains, would have developed gradually from many drenchings, not just one or two.

The "rainmaker" model can't yet answer whether the downpours occurred planetwide or just locally. One sticking point is reconciling how Mars could have been repeatedly soaked without destroying the many widespread outcrops of olivine found on its surface. Olivine weathers rapidly into clay when exposed to water, which has many planetary scientists thinking that the red planet never experienced the warm, wet conditions that would make it hospitable to life.