New observations confirm that there's water on or inside 1 Ceres, the largest asteroid and the destination of NASA's Dawn spacecraft.

Ever since the Dawn spacecraft departed asteroid 4 Vesta in July 2012, mission scientists have been planning what they'll study once the robotic craft reaches its next destination, even bigger 1 Ceres, about this time next year.

Their "to do" list has just gotten a little longer, because new observations show that Ceres gives off puffs of water vapor every now and then. Enough of it lingers to give this body the barest whiff of an atmosphere.

The discovery wasn't totally unexpected. Planetary scientists have long suspected that there's water on or inside Ceres. Back in 1978, observer Larry Lebofsky (then at the Jet Propulsion laboratory) detected a near-infrared absorption at 3 microns, which he suspected was due to hydrated minerals on its surface. 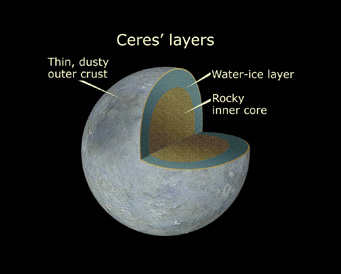 Ceres' shape is almost round like Earth's, suggesting that the asteroid may have a "differentiated interior," with a rocky inner core, a thick water-ice mantle, and a thin, dusty outer crust.

Moreover, with a diameter of 975 km (605 miles), Ceres is large enough to be classified by the IAU as a "dwarf planet." The overall shape is so startlingly round that the globe must have softened and separated into layers eons ago. Given Ceres's bulk density of only 2.1 g/cm3, the outermost layer almost has to be water ice. Yet confirmation of this icy exterior proved difficult, because water ice doesn't have strong spectral features.

So, instead, observers used European Space Agency's Herschel observatory to scrutinize the big ball in 2011, 2012, and 2013, keying on an absorption due to water vapor at the far-infrared wavelength of 0.54 mm.

As reported in today's Nature, a team led by Michael Küppers (ESA) found convincing evidence for water vapor — but it's there only some of the time. When Ceres did "exhale," it gave off only about 6 kg of water per second. That's a tiny amount, equivalent to what would escape from a patch of surface ice no bigger than an Olympic-size swimming pool.

The team suspects that one of two mechanisms is the cause. The interior of Ceres could still be warm enough to drive a little bit of water outward through deep fractures. Or maybe the surface occasionally warms enough for a little ice to sublimate and escape, carrying away loose dust and exposing fresh material. 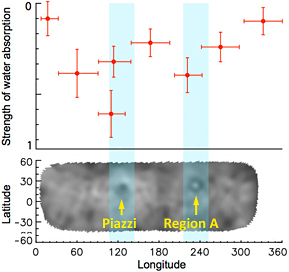 The top panel shows how the depth of a water-vapor absorption at 0.54 mm varied as the asteroid Ceres rotated on March 6, 2013. The signal was most pronounced when one of two dark regions, known as Piazzi and Region A, was in view. Note the two dissimilar readings at longitude 110Âº, taken about 9 hours apart (Ceres's rotation period). This shows that the rate of water-vapor escape varies even on short timescales.

Although the Herschel observations are too crude to identify actual sources, the water-vapor detections occurred when one of two known dark regions on Ceres was facing the Sun. These would likely be warmer than their surroundings. Calculations suggest that the gas might be escaping from areas about 60 km (40 miles) across.

One way to distinguish between these two scenarios is to determine whether the water vapor escapes even when Ceres is farthest from the Sun (its orbit is modestly eccentric), which would imply that the water is coming from deep within. Even better, Dawn will have two instruments, a near-infrared spectrometer and a detector for gamma rays and neutrons, that its scientists can use to figure out where the water is coming from.

Ceres puts the planet in “dwarf planet”! In its Hubble photo it even looks wet, complete with polar seas and equatorial deserts.

6 kg^-s works out to be about 8.5x10^17 kg of water escaped during the 4.5 billion years old solar system model. Various sources report the mass of Ceres is about 9x10^20 kg. Perhaps Ceres is a young asteroid and has not been venting like this for billions of years.