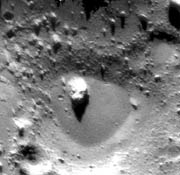 To geologists' surprise, the asteroid Eros has more than 250 'ponds' thought to contain compacted deposits of finely ground dust. This example, some 90 meters across, is surrounded by scores of small boulders.

By the time the NEAR-Shoemaker
mission ended last February, the spacecraft had photographed asteroid
433 Eros from virtually every angle. Since then geologists have been
poring over thousands of images of this 33-kilometer-long rock, and
they've come to appreciate that its surface is anything but simple.
Besides the usual assortment of craters, Eros sports two features never
before encountered on an asteroidal surface: thousands of boulders and
hundreds of flat-topped "ponds." In yesterday's issue of the journal
Nature,
mission scientists describe their efforts to unravel these enigmatic
discoveries.

The boulders are scattered over the entire surface. A
census of the 6,760 biggest ones (those at least 15 meters across) reveals
that they are concentrated along the asteroid's equator and, in particular,
in and around a large crater provisionally named Shoemaker. According
to Peter C. Thomas (Cornell University) and three colleagues, this clustering
is probably not a coincidence. They suspect that perhaps a billion years
ago, when the 8-km-wide crater was blasted into Eros, blocky debris
from the impact rained back onto the surface. The boulders nearest Shoemaker
had relatively brief flights, whereas those farthest away took an hour
or two before returning to the surface. The boulders likely created
small depressions when they landed, but Thomas thinks that since then
loose material on the surface has stirred and shifted enough to fill
them in.

The existence of all this rough rubble contradicts preexisting
notions about asteroidal surfaces. It's been thought that these bodies
have too little gravity to retain much impact debris. If the largest
boulders really came from a single, recent crater, observes dynamicist
Erik Asphaug (University of California, Santa Cruz), then Eros represents
"an impact modeler's delight" because only a specific combination of
impactor size, speed, and target properties will make an 8-km crater
and the observed distribution of boulders.

Meanwhile, Mark S. Robinson (Northwestern University)
has led an effort to understand the hundreds of strange, smooth-topped
"ponds" found on Eros. There's little question that they are sedimentary
deposits of fine-grain dust that became compacted over time, but where
did the dust come from? Robinson suggests that sunlight may be giving
the very smallest dust grains an electrostatic charge strong enough
to levitate them above the surface. These "free floaters" could then
migrate into low spots. He notes that a similar phenomenon has been
observed on the Moon during lunar sunrise and sunset. Like the boulders,
the pond-filled depressions cluster near Eros's equator — a hint
that they too may be related to the formation of Shoemaker.