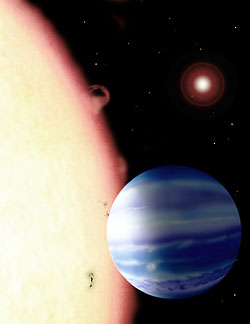 An artist's conception of a giant planet orbiting a nearby Sun-like star.

Which stars are most likely to harbor planetary systems? Before the discovery of the first extrasolar planet around a normal star in 1995, astronomers had no way to answer this question. But now, with more than 1,000 Sun-like stars examined for evidence of planets and more than 100 Jupiter-like exoplanets catalogued, the answer is clear. The stars most likely to host planets are those with more "metals," that is, elements heavier than hydrogen and helium.

A relationship between stellar metallicity and the occurrence of planets has been known since the exoplanet count passed a few dozen in the late 1990s. Now planet hunters Debra Fischer (University of California, Berkeley) and Jeff Valenti (Space Telescope Science Institute) have analyzed the link in greater detail by determining the compositions of 754 Sun-like stars that have been scrutinized for signs of planets at the Lick, Keck, or Anglo-Australian observatories.

At the meeting of the International Astronomical Union (IAU) in Sydney, Australia, Fischer reported that 5 to 10 percent of stars with compositions like the Sun have planets. Stars with barely a third of the Sun's metallicity have only a 3 percent chance. But the picture changes dramatically for stars with three times the Sun's inventory of heavy elements. "If you look at the metal-rich stars, 20 percent have planets," said Fischer. "That's stunning." 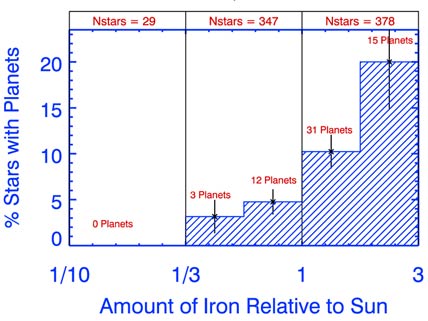 Stars with more iron and other "metals" (elements heavier than hydrogen and helium) are more likely to have planets in orbit around them.

This result could help astronomers understand how planets form. Some theorists favor the so-called disk-instability model, in which dense clumps in a disk of gas and dust surrounding a newborn star collapse to form planets. Fischer and Valenti's findings support a competing model called core-accretion, in which planets build up gradually as metals stick together to form grains, pebbles, rocks and ever larger objects.

In another IAU session, Nuno C. Santos (Geneva Observatory) addressed the question of where planet-hosting stars got their metals in the first place. Just because a star has lots of heavy elements doesn't mean it formed from a nebula already enriched with them — it might have become "polluted" with metals after formation by swallowing planets that ventured too close. But in that case stars with planets should not only tend to show high metallicities, but also high levels of convection (churning). Otherwise the metals from accreted planets would remain deep inside the stars rather than be carried up to the surface where they could be observed by astronomers on Earth. According to Santos, however, high-metallicity stars with planets show no tendency to have the spectral types normally associated with intense convection, so they must have acquired their metals at birth.

Because metals are made by nuclear reactions in stars, the interstellar medium has become more enriched with heavy elements over the eons. Planets were presumably rarer in our galaxy's past, and they may become more common in the future. As Fischer and Valenti put it, we may be on the verge of a planetary "baby boom."