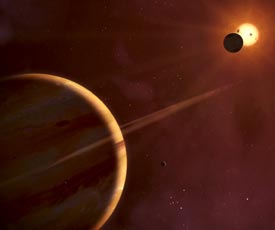 As astronomers have discovered more planets outside the solar system, they have come to realize that resonances play key roles in shaping the architectures of many multiple-planet systems. "Resonance" refers to a broad class of relationships in which one object perturbs another periodically.

This Web page is a supplement to the article "Planetary Harmony" by Robert Naeye (Sky & Telescope: January 2005, page 44). After February 1, 2005, the article will be available for download as a PDF file from the S&T Magazine Archive. 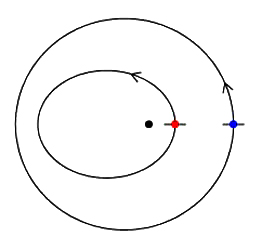 The two known planets orbiting the red-dwarf star Gliese 876 are locked in a tight 2:1 mean-motion resonance, which can be clearly seen in this animation as the inner planet (red dot) orbits the star twice every time the outer planet (blue dot) goes around once (its period is 61 days). The short straight lines mark periastron, where each planet comes closest to the star in its orbit. Note how the two periastrons line up and precess. The eccentricity of each planet’s orbit has been exaggerated to make the effects more noticeable.

This movie depicts the orbital evolution of the outer two known planets orbiting Upsilon Andromedae. The arrows indicate the long axis of each orbit; the longer the arrow, the more eccentric the orbit. The rotating arrows highlight how each orbit precesses. The planets are not in resonance at the start of the movie. But eventually gravity establishes a secular resonance, which is clearly seen as the arrows begin to nearly line up. 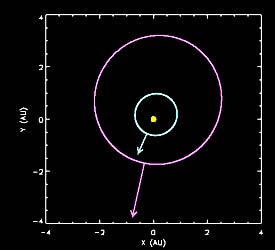 The secular resonance operating in Upsilon Andromedae ensures that the long axes of the two outer planets' orbits (represented by the arrows) always point in nearly the same direction. The resonance helps maintain the stability of the system by preventing either orbit from becoming so eccentric that the orbits intersect. The star has a third planet that orbits in a circular orbit very close to the star, but it is not shown in this movie. 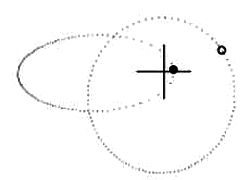 This computer animation depicts the strange orbital evolution of two planets locked in a 1:1 resonance. The two planets have nearly the same orbital period, but one starts in a circular orbit and the other in a highly eccentric orbit. But over hundreds of years, the planets trade eccentricities. The resonance prevents the planets from colliding, so the system is stable for long time scales. Systems like this have not been observed yet, but they should exist and could be discovered in the near future.