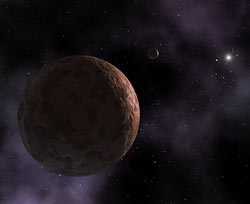 An artist's conception of the large object, informally named Sedna, discovered at more than twice Pluto's distance from the Sun. Its 40-day rotation period hints that the rotation is tidally locked to a relatively large, unseen moon.

The solar system's terra cognita just got a lot bigger, thanks to the discovery of a large miniworld found about twice as far from the Sun as any known object. The new body is nearly 13 billion kilometers (86 astronomical units) away. Moreover, it's big, with a diameter of 1,200 to 1,700 km — about half the size of Earth's Moon and likely ranking as the largest solar-system find since the discovery of 2,400-km-wide Pluto in 1930.

Michael E. Brown (Caltech), working with Chad A. Trujillo (Gemini Telescope) and David Rabinowitz (Yale), spotted the object last November 14th in a trio of images taken with the 48-inch Samuel Oschin Telescope on Palomar Mountain in California. For now it is designated 2003 VB12, though the discoverers suggest that it be named Sedna, after an Inuit goddess who lives in a cold, dark cave at the bottom of the icy sea. 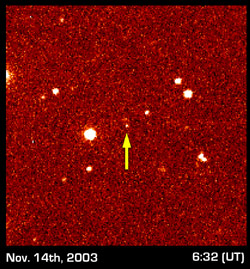 Sedna on its night of discovery, caught by the QUEST camera on the 48-inch Oschin telescope on Palomar Mountain. Since then it has been found on archival images back to 2001. It went undiscovered this long because is only about red magnitude 20.5.

A check of older images turned up 2003 VB12 in frames acquired in 2001 by another team with the same telescope. Using those positions and other follow-up observations, Brian A. Marsden (Minor Planet Center) calculates that the body has a remarkably large and eccentric orbit. Its distance from the Sun ranges from 11 billion km (76 a.u.) at perihelion to an astounding 150 billion km (about 1,000 a.u.), a circuit that takes more than 12,000 years to complete. The previous distance-record holder, 2000 CR105, gets out to 410 a.u. from the Sun in a 3,300-year orbit.

Sedna's location is a puzzle to solar-system dynamicists. It's too far away to belong to the Kuiper Belt, the collection of icy bodies situated from the orbit of Neptune out to about 50 a.u. Yet even when farthest from the Sun, Sedna is only a tenth as distant as the presumed inner edge of the Oort Cloud, a vast, long-hypothesized sphere of several trillion cometary bodies that may extend halfway to the nearest star (more than 100,000 a.u.). "It's in no-man's land," Brown says. "We had no expectation of finding anything out there." 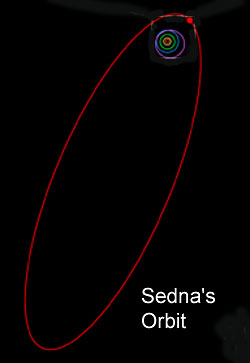 Sedna's orbit, and its current position, compared to the rest of the solar system. The small purple circle is the orbit of Pluto.

"The perihelion distance is a real problem," explains dynamicist Paul R. Weissman (Jet Propulsion Laboratory). "Something must have raised the orbit out of the planetary region." A massive object lurking just beyond the Kuiper Belt could conceivably have perturbed Sedna outward, but something so large should have been found by now.

More plausible, Weissman and others say, is a yank from outside the solar system. "It has to have been a passing star — there's no way around it," argues Harold A. Levison (Southwest Research Institute). He and Alessandro Morbidelli (Côte d'Azur Observatory, France) postulate that Sedna and 2000 CR105 represent two of many objects affected by a star that passed within 800 a.u. of the Sun less than 100 million years after the solar system's birth. (Anything skirting by later than that would have severely stunted the Oort Cloud's growth.) To get a stellar encounter so close and so early, our Sun must have formed within a dense cluster of stars — an idea that has lacked solid evidence until now.

Brown says, "If the stellar-encounter idea is correct, which I'm willing to bet, that means there are an awfully large number of these objects hanging around in space — including almost certainly ones that are Pluto's size and larger." His team's ongoing search for distant solar-system denizens, which employs the wide-field, 170-megapixel Palomar QUEST camera, is now about 15 percent complete and has at least two years remaining. Their effort yielded another large object, 50000 Quaoar, in 2002. 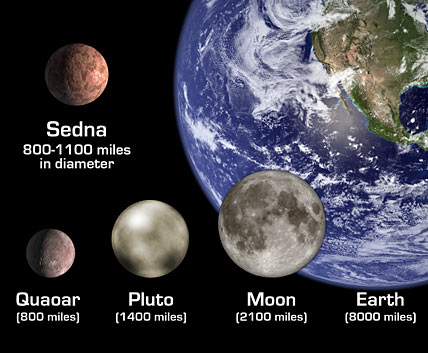 The estimated size of Sedna compared to Earth, the Moon, the planet Pluto, and Quaoar. The latter two are especially large members of the Kuiper Belt.

Meanwhile, planet specialists are plenty curious about Sedna itself, which currently is a bit brighter than 21st magnitude. The true size remains uncertain — a look by the Spitzer Space Telescope failed to detect it at infrared wavelengths, and observations by the Hubble Space Telescope are pending. But Sedna is distinctly red and has a surprisingly bright surface that reflects 20 to 25 percent of the feeble sunlight striking it.

As viewed from Sedna, the Sun would be reduced to a dazzling star of magnitude –17, illuminating the frigid terrain no more brightly than a terrestrial landscape in twilight. Consequently, the discoverers estimate that their far-flung find has a surface temperature hovering close to 33° Kelvin (–400°F). At the orbit's most distant point, the sunlight level would drop to about the equivalent of the full Moon, chilling the surface even more, to near 20°K.

And Sedna may even have a companion. The observations in hand hint that this cold little world takes 40 days to rotate. Brown says a natural spin rate that long would be unlikely — more plausibly, the rotation has become tidally locked with an orbiting satellite. Hubble images should soon resolve whether such a companion exists.