Way back in February, plans were afoot to have President Obama and his family host a star party at the White House as part of the International Year of Astronomy. Eight months later, it's going to happen. On October 7th some very carefully chosen amateur astronomers will be giving the Obamas and 150 children a tour of the heavens from the White House South Lawn. 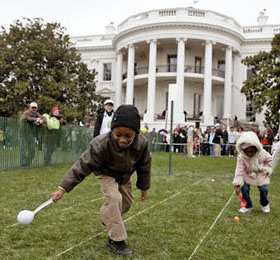 Each year the President hosts an Easter-egg roll on the South Lawn of the White House.

A press advisory, issued yesterday, notes that on Wednesday evening "the President and First Lady will host an event at the White House for middle-school students to highlight the President's commitment to science, engineering and math education as the foundation of this nation's global technological and economic leadership and to express his support for astronomy in particular — for its capacity to promote a greater awareness of our place in the universe, expand human knowledge, and inspire the next generation by showing them the beauty and mysteries of the night sky."

This stellar event is the brainchild of Audrey Fischer, a Chicago-area amateur who imagined uniting children around the world with one big stargaze. Early this year, her head full of stars after a visit to Mauna Kea, she fired off an email to the White House to pitch the idea. "Every astronomer, teacher, and child I talked with [is] so enthusiastic," she wrote. "They are just holding their breath for your response."

You can imagine how many entreating emails West Wing staffers must slog through each day, but something about this one clicked. Desiree Rodgers, the White House's social secretary (in charge of events like the annual Easter-egg roll) called Fischer for more details. Hundreds of supportive messages poured in from around the country, and a volley of phone and email exchanges between Fischer and various Administration officials followed. The idea had gotten traction. 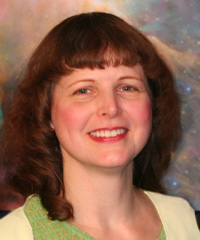 Known for her passionate advocacy of astronomical causes, Chicago-area amateur Audrey Fischer sparked the effort to hold a star party at the White House.

Fischer's original hope was to hold the star-studded star party in early April, to coincide with the IYA's "100 Hours of Astronomy." But the months dragged on with no confirmation. Was the early momentum waning?

In July, I heard presidential science advisor John Holdren, who heads the Office of Science and Technology Policy, tell a gathering of space enthusiasts that President Obama was committed to jump-starting innovation in science and technology and that engaging young people was key to this plan. I sidled up to Holdren afterward and broached the star-party idea. He was aware of it, thought it was a great idea, and felt sure it would happen.

IYA organizers had suggested a couple of celestially favorable dates, September 26th and October 23rd (the latter to coincide with the IYA's "Galilean Nights"). Ultimately the White House and OSTP picked October 7th — not optimum for a kid-friendly star party because there'll be no evening Moon. Jupiter will be up (a plus) and there's a whopper of an Iridium flare (magnitude -8) that night. But little else in the night sky will be obvious from our nation's light-drenched capitol.

The irony in all this is that the White House handed off the event's coordination to NASA Headquarters, leaving the IYA team completely in the dark, so to speak. And get this: Audrey Fischer didn't receive an invitation to attend! 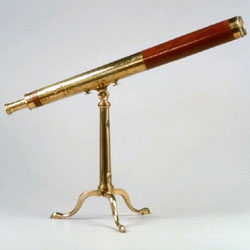 Future U.S. president Thomas Jefferson purchased this achromatic refractor during a visit to London in 1786.

Nonetheless, it should be a wonderful event. I hope President Obama uses it not only to fire up the next generation of amateur and professional astronomers, but also to raise awareness about light pollution and the energy waste it represents.

So how can you join in the festivities, albeit vicariously? Details are still sketchy, but apparently President Obama will kick-off the event at about 8 p.m. Eastern time with a brief address that will be streamed live by the White House and by NASA TV. Plans include viewing through more than 20 telescopes; presentations in portable planetariums; and various hands-on activities. (If it's cloudy, there'll likely be a secondary site to host the event indoors, perhaps the U.S. Naval Observatory.)

Meanwhile, IYA organizers are scrambling to organize local star parties nationwide at the same time, and to get some linkage to upcoming events like the "Galilean Nights" and the "Great World Wide Star Count".

No matter what the outcome, it's impressive that President Obama is showing this much interest in science generally and astronomy in particular. Another president, Thomas Jefferson, was well known for his scientific curiosity, and a brass telescope is prominently displayed at Monticello, his Virginia home.

I wonder how many other presidents have done some stargazing. Can any of you help me compile a list?

there is noricher field of science opened to the exploration of man in search of knowledge than astronomical observation John Quincy Adams, 1842

But there is an evening moon on Wednesday - moonrise is a little before 10 PM in Washington DC. It will be nice for viewing - closer to third quarter - and not too late. The World Space Week press release claims that the moon is one of the observational targets, at least.

President Abraham Lincoln was familiar enough with astronomy to refer to several constellations and star clusters in his writings. Impressive , since he must have been self-educated in this as well as in many areas - scientific and cultural. Many folks don't realize that Lincoln's Presidency would have been very challenging even without the civil war. He was the first "modern" president in that he had to deal with the first electronic communication (telegraph) as well as the transportation revolution of the railroad, although the transcontinental railroad's golden spike wasn't driven (in Utah) 'till a few years after his death.

Since there was poor coordination with the IYA people, there was poor coordination within the amateur astronomy community. There are many amateur astronomers across the country who have given hundreds if not thousand of hours of unpaid volunteer time with their equipment and expertise at local schools and other venues that would have been deserving of an invitation to participate in this historic White House outreach.

I am very disappointed with the lack of organization from the Obama administration for this IYA event. Perhaps if they make it an annual star party then deserving amateur astronomers can get invited. Local clubs can nominate members who are deserving of such an honor. I know of many who are deserving who will most likely be ignored for this inaugural astronomy outreach. It is a shame!

Jefferson was an avid stargazer and likely (I like to think) would have been an avid proponent of astronomy and space exploration were he in today's White House.

I, too, am very disappointed with the White House's lack of proper and considerate organization (Shame, Shame - not even an event for Fischer). However, fantastic people that they are, the IYA Team is taking full advantage of this golden opportunity with a very positive spin. http://www.astronomy2009.org/news/updates/499/

Amateur and professional astronomers are like no others on the face of the planet. Perhaps it is because they have at least one foot in the cosmos, their level of outreach and enthusiasm is unmatched.

My sincerest wishes is that the StarParty at the White House becomes an annual event... developed into its fullest potential utilizing all the talents this community has to offer. Can't you see literally hundreds of sidewalk astronomers with their scopes & demo tables in the Ellipse just outside the White House lawn, and live webcast from the great telescopes of the world streaming images of the Universe we are just beginning to understand?

It is, indeed, a profound duty realizing it is the starry night sky that connects all people across the globe and across time.

Remember, it was the hundreds of letters of support from our community that helped make the very first Kid's StarParty at the White House happen. Thank you letters can help make this become a repeat performance.

Each of us can make this first StarParty a success by spreading the word to schools, participating in the White House webcast, hosting local supporting sidewalk astronomy events, growing the momentum with each IYA and NASA's inspiring events lasting the entire school year.

Love to track these kids... If they keep it up, they'll be light-years ahead of the rest of the pack. Bet ya we harvest a crop of scientists and space-science-friendly citizens (& voters)! Can't help it 'cause the enthusiasm of the astronomical community is contagious once unleashed... so watch out Universe!

Remember, all of our letters made all the difference. We have one foot in the White House door and the other in the Cosmos... we have a great opportunity to increase the likelihood of StarParty at the White House becoming an annual event. I am so proud of you and so happy to be a part of this community.

In Febuary I sent this letter to the President Obama official website. I know it sound a little far fetched but thought it would be a great idea. Anyone else think it is realistic?

I understand all the difficult things that are occurring in the country and world today. Even in the hardest times I know that we as a country have always tried to engage in the positive aspects of life while dealing with the negative. That is why I am writing this letter.

I have heard that every President adds something to the White House albeit a room or a bowling alley or something else. 2009 is the International Year of Astronomy and I thought an idea would be to place a nice Observatory on the roof of the White House. I know it may sound a little strange at first but many Schools, homes and other facilities have them and it is great for education as well as for leisure. I believe it would also be very symbolic in the sense that it is a way of looking out beyond our own country and even world into what is obviously a vast universe. This would be in contrast to the way the country had been headed over the past few years.

A small several person observatory dome could easily fit on the roof of the White House and be hidden from view from below. As well, I understand the degree of light pollution present in the Capital, but a nice refracting telescope could be housed in the dome and can offer great views of the moon and planets as well as some other nearby objects such as comets, satellites and even the space station. Astro-physics, a great American telescope company based out of Illinois, offers some great ones.

I know it sounds different, but thought it might be a nice idea. "