Last week marked the debut of an impressive addition to astronomers' means of seeing the universe. On May 26th the Stratospheric Observatory for Infrared Astronomy, or SOFIA, made its first in-flight observations at night. The nearly 8-hour flight carried a crew of researchers and engineers to an altitude of 35,000 feet (10.7 km) to see how well this flying observatory would perform using deep-space targets. 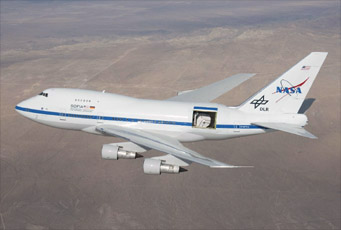 SOFIA's German-built telescope can be seen in its fuselage cavity during this test flight on December 18, 2009. Click here for a close-up of the opening.

The SOFIA effort has had a long and rocky history, its scientific promise punctuated by moments teetering on the brink of oblivion. The idea of an observatory-grade telescope flying high in the atmosphere had been kicked around since the 1980s. But it wasn't until 1996 that NASA and its German counterpart, DLR, agreed to equip a Boeing 747SP with a 98-inch (2.5-m) telescope that would look out of a hole cut in the craft's fuselage.

It was an audacious plan — but not unprecedented. For two decades (1974–95) NASA's Kuiper Airborne Observatory, a highly modified C-141A transport with a 36-inch (0.9-m) reflector in its belly, had provided astronomers with satisfying glimpses of the far-infrared sky. SOFIA would be KAO's successor, and the February 1999 issue of Sky & Telescope notes that "airborne astronomy will again soar" with SOFIA's commissioning in late 2001.

If only it had been that easy! The effort was beset by technical woes that caused its schedule to slip badly and its budget to balloon. In 2006 NASA managers proposed pulling the project's plug, even though the craft sat nearly ready for flight. Fortunately, SOFIA survived. As Jonathan McDowell reported that summer, "The mission was saved because of effective lobbying from Germany, and perhaps more important, an independent review that convinced NASA officials that SOFIA’s technical problems were essentially behind it."

Let's face it: you don't expect a high-altitude aircraft to serve as a stable observing platform — or even fly — with an enormous square hole in its side. 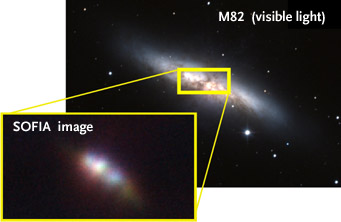 One of SOFIA's first-light targets was the starburst galaxy Messier 82. Shown here are a visible-light view and a view acquired by the airborne telescope at wavelengths of 20 (blue), 32 (green) and 37 microns (red). The infrared image sees past the galaxy's dust clouds to reveal star-forming activity near its nucleus.

When cruising at 41,000 feet, above 99% of our atmosphere (and particularly its infrared-blocking water vapor), the telescope and its instruments will record objects from 0.3 micron in the near-ultraviolet to 1600 microns. According to its specifications, the typical seeing at that altitude is 2 to 4 arcseconds, and SOFIA should deliver deliver diffraction-limited views at wavelengths greater than 15 microns.

"It's tremendous for me personally to see these images," says Eric Becklin, the project's chief science advisor for Universities Space Research Association. Becklin led the team that wrote the original proposal to NASA for the development and operation of SOFIA. USRA will operate the craft together with partner DSI.

Routine observing sorties should begin next year, ramping up to 150 flights per year by 2014, and it can make them worldwide. The "SP" in 747SP stands for "special performance," a long-range variant with a range of 6,600 nautical miles (12,200 km). Only 45 of these planes were built, and of those only 14 are still in service. Project managers hope to keep SOFIA flying for 20 years.

After writing about SOFIA for at least a decade, I hope to see it firsthand next week, when I'll be visiting NASA's Dryden Aircraft Operations Facility in Palmdale, California.

Congratulations to all the astronomers, pilots, and many others who saw this through to a wonderful beginning.
We can all look forward to wonderful visuals...and for the ones who "get it" the science. Thanks for everyone who stuck it out and made the dream of SOFIA a reality.

I agree Kelly! All I can say is, "At last!" I worked on the SOFIA project when it was at NASA Ames and got laid off almost 9 years ago, so I have followed the project's slow progress all along, even from the early 80s when I was working on the KAO.

Thanks for the article, Mike