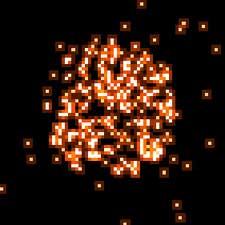 The first-ever view of Mars in X-rays was captured by the Chandra X-ray Observatory in this image taken on July 4, 2001. The planet's disk, 20 arcseconds across, is slightly gibbous, with the day-night terminator near the left edge.

The realization that Mars has a high-energy glow is not surprising. Venus, Jupiter, Earth, and even comets shine (albeit faintly) in X-rays. Though the source of the X-ray emission varies from object to object, in Mars's case, near heights of 80 kilometers in the atmosphere, solar X-rays strike oxygen atoms with enough energy to tear away their electrons. But these ions soon recombine with other electrons and return to their original, unexcited state, emitting "Martian X-rays" in the process.

Dennerl has also noted a second, weaker source of Martian X-ray emission, in the form of a faint halo extending out to 20,000 km (3 Martian radii). The halo is most likely the result of X-ray ions colliding with oxygen and carbon atoms that are escaping from Mars.

This was not the first attempt to image Mars in X-rays, as the orbiting Rosat observatory was unsuccessful in three tries during April 1993. But the detections Chandra has made when pointed at other planets, particularly Venus, led Dennerl to suspect that Mars should be an X-ray target. His computer simulations even predicted that Mars would look about 25 percent brighter in X-rays along its sunlit limb, an enhancement that Chandra did indeed observe. "There was a remarkably good match between expectation and the observation," says Dennerl.

One reason for his successful discovery was timing. Chandra's observations took place three weeks after the 2001 Martian opposition — at a time when the planet was just 0.46 astronomical unit away and a relatively plump 20 arcseconds in diameter.

As many amateurs can attest, viewing the 2001 opposition was hampered by a global dust storm that obliterated details on the surface. But for Dennerl, the storm was a wonderful opportunity to determine whether dust in Mars's upper atmosphere influenced X-ray emission. However, his analysis finds no evidence of dust-related X-rays, as there were no hot spots in Chandra's image associated with localized dust concentrations.

Dennerl's finding was recently accepted for publication in Astronomy and Astrophysics.