A mind-boggling 1.5 million galaxies trace out the filaments, clusters, and voids in Sloan Digital Sky Survey's new 3D map of the universe. 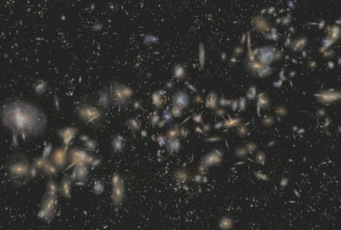 A still of the Sloan Digital Sky Survey's new 3D map of the universe.

When I was in graduate school not so very long ago, I studied X-rays and visible light radiated by quasars, brilliant beacons powered by supermassive black holes in distant galaxies. At the time, I used the largest data set available: almost 100,000 quasars observed by the Sloan Digital Sky Survey (SDSS). This robotic telescope has surveyed the night sky since 2001, taking images and spectra of countless objects night after night. The riches were (and are) freely available to anyone, including teachers (complete with suggested lesson plans), Joe and Jane Public, and graduate students like I was.

So you'll have to forgive me for growing a little nostalgic when I learned of the latest data set released by the SDSS last week, one that dwarfs what I had available only a few short years ago.

In 2005 I analyzed quasar spectra from Data Release 5. The massive data set contained images and spectra of 675,000 galaxies, 90,500 quasars, and 155,000 stars — numbers that boggle the imagination. Now, Data Release 9 has more than doubled the number of galaxies and quasars. And with two surveys (SEGUE-2 and APOGEE) dedicated to observing stars in the Milky Way, the number of stars has more than quadrupled. Astronomers can now sift through data stored in tens of terabytes.

It's not easy to imagine 1.5 million galaxies. But let's try. Take a tour through SDSS's new 3D map of the universe: