The Summer Star Party in western Massachusetts, held just before Stellafane, had fine clear nights, more than 150 good folks, and lots of scopes at its new location this year.

I didn't know it got this dark anywhere in Massachusetts. No, it wasn't West Texas. But the black sky over the Rockland Astronomy Club's Summer Star Party left almost nothing to be desired, at least for a New Englander like me.

Sky & Telescope cosponsored the SSP this year for the first time. Unusual for an amateur gathering, it runs for a full 10 days. It leads right up to Stellafane, which is happening this weekend (August 9–11) less than two hours to the north.

The SSP organizers — the same folks who put on NEAF north of New York City — had their hands full. This was the SSP's first time at a new and better location, the Peppermint Park Campground in Plainfield in the Berkshire Mountains northwest of Amherst-Northampton. 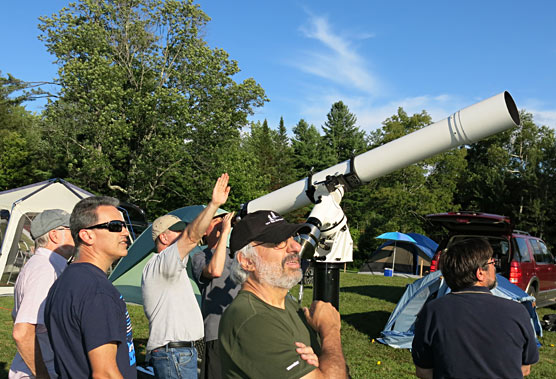 How many astronomers does it take to find Venus in the daytime? Once we had the tiny, 13″ gibbous disk in this exquisite 6-inch refractor, a couple of us thought we might be seeing a dusky ring around one of its polar regions.

More than 150 registrants set up telescopes dotting a wide expanse of level, mowed grass. The new campground offered plenty of electric power on the observing field (120 amps), pleasant campsites, a big indoor dining and meeting room, and other amenities. But the folks putting the event together sometimes found themselves in a mad race to iron out the bugs of a new location before the crowds arrived.

My first night, I was drafted to give a green-laser-pointer tour of the constellations for the crowd of non-astronomers who'd been invited from the rest of the sprawling, but thoroughly darkened, campground.

The night turned almost cloudless, affording views of Saturn and endless deep-sky objects through scopes from 2.4 to 20 inches aperture. Riches of the Scorpius-Sagittarius Milky Way that I'm used to seeing only with binoculars were plain as day to the naked eye, despite a slight light dome from distant cities to the south-southeast. Once and for all I saw why the Eagle Nebula, M16 in Serpens, got its name. In a big scope under a sky like this, it's very obviously the Boy Scout Eagle medal with an overlarge, starry head. That's the shape to look for! 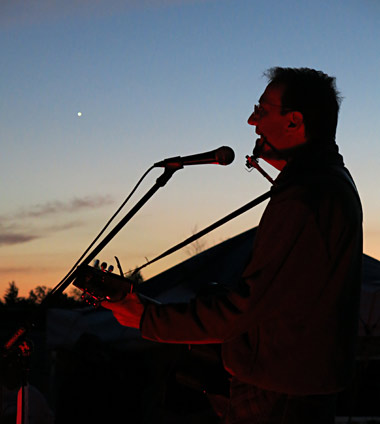 Late at night I practically had the run of a 20-inch f/6 Dob, towering into the sky next to a towering ladder, built and co-owned by Keith Murdock and several other Rockland stalwarts. I introduced Keith to the Owl (or ET) Cluster, NGC 457 in Cassiopeia, which amazingly he hadn't known about; he immediately took it on as a personal favorite.

I got a dazzling look through the 20-inch at my personal totem star: Eta Cassiopeiae, a brilliant, Sun-yellow primary with a clear-orange K-dwarf companion. It's one of the closest truly solar-type stars in the sky (just 19 light-years away), and depending on what kind of planets do or do not turn up there, I've often wondered if it might be the first destination for a colonizing starship in a millennium or two.

And the crowd had plenty of reminders that you don't have to wait for the peak nights of the Perseid meteor shower to see Perseids. Even nine days in advance, they seemed to match the number of Delta Aquariid and spordic meteors zipping across the stars.

To a tent full of the sleepy-eyed the next morning, I gave a talk on the what, when, and where of Comet ISON (see S&T's forthcoming November issue) and on techniques for seeing the most you can see with your deep-sky eyes (including much from my article here). 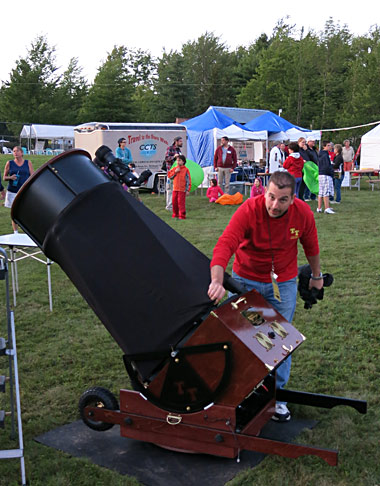 Bob Teeter of Teeter's Telescopes tied for the biggest scope on the field with this 20-inch Dobsonian. 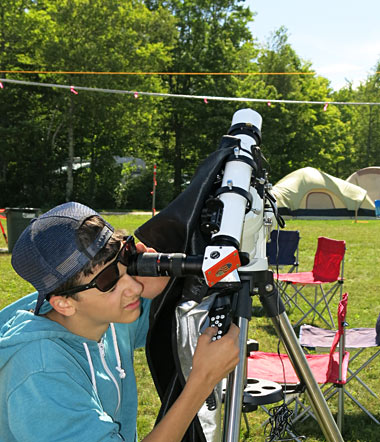 Prominence-watching on the Sun with an H-alpha solar scope. 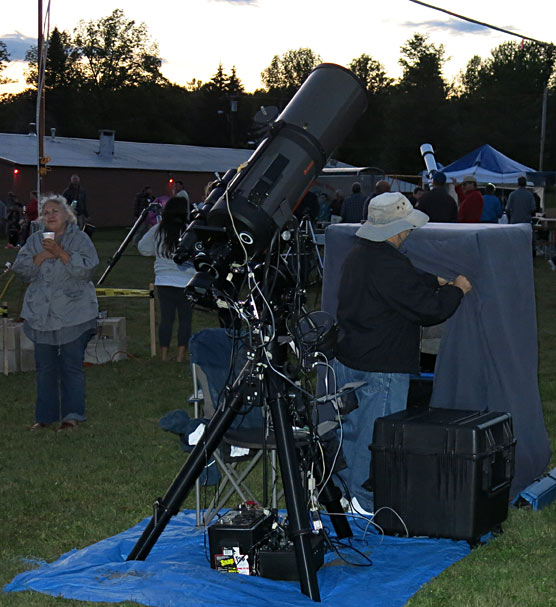 Setting up for a deep-sky imaging session can be... complicated.