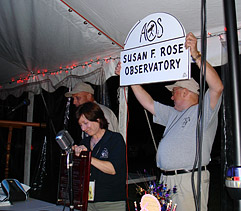 The Amateur Observers' Society of New York renamed its observatory in honor of president emeritus Sue Rose at the ALCON Star B Cue.

More than 150 amateur and professional astronomers gathered at Hofstra University on Long Island this past Friday and Saturday to attend ALCON, the joint convention of the Astronomical League and the Association of Lunar & Planetary Observers (ALPO).

ALCON was pulled off almost without a hitch, thanks to the excellent preparation of the organizers, many of whom hail from the Amateur Observers' Society of New York (AOS). The talks themselves covered a wide range of subjects, including science, astrophotography, observing, light pollution, education, and public outreach. Many of the hallway and dinner conversations focused on strategies for attracting more young people to amateur astronomy. 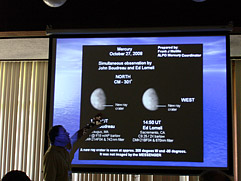 Talks by ALPO speakers focused on recent events occurring in our dynamic solar system. Astro-imagers John Boudreau, Frank Melillo, and Stuart Parker discussed their techniques used for photographing Mercury, and how their observations relate to recent findings by NASA's Messenger Mercury orbiter. Melillo also updated attendees on his recent discovery of a bright spot in the clouds of Venus, verified by scientists using the European Space Agency's Venus Express orbiter. Richard Schmude presented an interesting comparison between images of the recent Jupiter impact (discovered by Australian amateur Anthony Wesley) with those of Comet Shoemaker-Levy 9. Schmude also presented findings based on ALPO observations of Comet Lulin. Other lectures included a discussion on features in Mars's North Polar Cap by Roger Venable, the upcoming equinox on Saturn, and outer-planet observations. 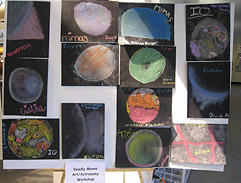 Young students created these drawings of "Deadly Moons" during the ALCON children's art/astronomy workshop, which was run by Irish astronomer Deirdre Kelleghan, who was assisted by AOS activities director Linda Prince.

Perhaps the most memorable experiences occurred when AOS president emeritus Sue Rose was awarded two great honors for her longstanding contributions to the Society and amateur astronomy. On Friday night, a "Star B Cue" banquet was held at the Custer Institute on eastern Long Island. After dinner, the AOS held a special ceremony to name its facility the Susan F. Rose Observatory in her honor. On Saturday afternoon, right after Joe Rao delivered a rousing lecture about great comets of the past 400 years, Joe informed Sue that Minor Planet 1993 SR3 has been renamed 7194 Susanrose. The announcements came as a complete surprise to Sue, who was overcome with emotion on both occasions. She was quick to emphasize that all of the AOS's successes over the years can be attributed to the efforts of a very special group of people.

The editors of S&T congratulate Sue for these well-deserved honors, and for her years of tireless efforts to advance the cause of amateur astronomers. We also thank and congratulate the sponsors and organizers of ALCON for a wonderful weekend of astronomy talks, events, and conversations!