MIT scientist Maria Zuber has worked with numerous interplanetary spacecraft before, having helped dispatch instruments to the Moon, Mars, and Mercury. But I'm sure she'll sleep better tonight knowing that the twin spacecraft of the Gravity Recovery and Interior Laboratory (GRAIL) project, for which she's the principal investigator, have successfully reached their final destination. 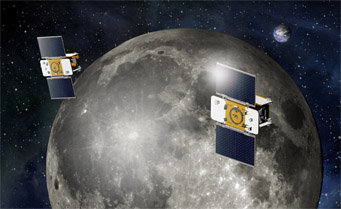 Using a precision formation-flying technique, the twin GRAIL spacecraft will measure irregularities in the Moon's gravity — key to revealing the size of the Moon's core and other longstanding questions about the lunar interior.

GRAIL A arrived at the Moon late yesterday, firing its braking engine for about 40 minutes and settling into a looping polar orbit that ranges from 56 to 5,197 miles (90 to 8,363 km) from the lunar surface. GRAIL B wasn't far behind, arriving late today. Over the next three months, ground controllers will maneuver both craft into much lower final orbits, which will glide just 34 miles (55 km) above the Moon's cratered face.

(NASA won't be calling them A and B for much longer. Any day now, Zuber will announce the winners of a nationwide contest, which ended in November, to rename the craft. Hundreds of students wrote short essays to make the case for their suggested monikers.) 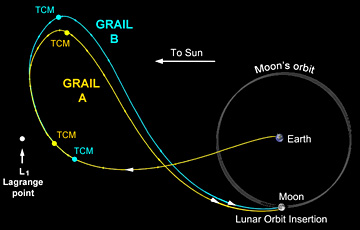 The GRAIL spacecraft will reach the Moon via a looping, four-month-long trajectory that makes use of the L1 "balance point" between the gravity of the Sun and Earth.

The GRAIL spacecraft left Earth way back on September 11th, so they weren't in any particular hurry to reach their destination. Instead, they followed convoluted but very energy-efficient, 3½-month-long trajectories that make use of a "balance point" between the gravitational fields of the Sun and Earth, the L1 Lagrange point, to swing them toward the Moon.

As I noted after their launch, the GRAIL craft will buck the trend of recent lunar orbiters that have scrutinized the bleak surface with arrays of detectors. Instead, they'll exploit the Moon's own gravity to probe the deep lunar interior. From March to early June, radio antennas on Earth with keep very close tabs on the crafts' locations with respect to one another to within a few tenths of a micron — even though they'll be separated anywhere from 62 to 140 miles (100 to 225 km).

All that precision should reveal any minuscule changes in their velocities, deviations from perfectly Keplerian motion that betray "lumpiness" in the distribution of mass inside the globe. For the first time, Zuber and her team should determine whether the Moon has a core and, if so, its size and physical state, why the lunar crust is thinner on the hemisphere that continually faces Earth, and much more. 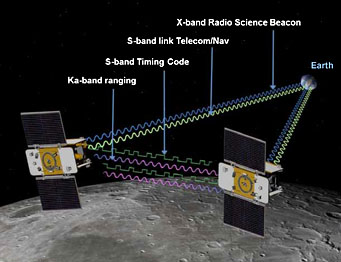 On June 4th much of the Moon — and the spacecraft — will be plunged into darkness during a partial lunar eclipse that will be challenging to survive: their electronic systems were designed to be in constant sunlight. But if the craft make it (and Zuber seems upbeat about their chances), then plans call for the orbital altitudes to be lowered to just 15 miles (25 km) — skirting the surface so closely that the craft should be able reveal gravitational irregularities under even modest-size craters.

This mission extension should run through December, and ground controllers will need to fine-tune to orbits constantly to keep the spacecraft from crashing into the Moon — which is their ultimate fate.

By the way, the project has teamed up with former astronaut Sally Ride to create a great opportunity for students. More than 2,000 classrooms have already signed up to use MoonKAM, a dedicated camera aboard each GRAIL spacecraft, and you'd better hurry if you want yours to be added to the list.

Later on this year our sun may have some solar storms that may upset the gravitational fields of Earth and the Moon. ALSO, there will be an alignment with our solar system and the center of the Galaxy.

My Question is: Will this cause a wobble of Earth, and or cause the moon to move closer or farther away ?

The Sun Spots and Solar Storms will have an effect on the Earth and the Moon.

Glenn: Solar "storms" or flares have absolutely no effect on gravitational fields. There is no "alignment" between the Solar System and the center of the Milky Way, any time in the past or expected in the future, and no mechanism for an effect of any kind even if there was such a thing. Sunspots and solar flares that often accompany them do not have any effect on the Earth or the Moon other than to bathe them in an extremely rarefied stream of charged particles arriving with the solar wind or in more energetic outbursts via occasional coronal mass ejections which are common during the active portion of the Sun's 11-year cycle. These may produce heightened aurora activity at lower latitudes or in much rarer cases disrupt radio transmissions and satellite electronics. The Moon's surface is constantly bombarded by the solar wind and cosmic rays, so there's nothing extraordinary about 2012. These are electromagnetic effects, not gravitational. The effect compared to the amount necessary to deflect the inertial masses of the Earth or the Moon is infinitesimally miniscule. Earth will not be induced to wobble more (or less) than it normally does (the gravitational influence of the Sun - and even by Jupiter - is BY FAR more effective at doing that) and the Moon won't be altered from its usual orbit, even to within the accuracy of what the GRAIL spacecraft will be able to measure, if they were devoted to that measurement, which they are not. There is nothing special about 2012. Nature is not revealed by pseudoscientific nonsense.

Your Accurate Mr Szautner, tells it right!
The Solar Wind & Flares pound spacecraft with Radiation & can damage the electronics, but could hardly affect their Orbit because the Solar Atmosphere is so rarefied here! No possible effect.
As to alignment, perhaps a little wry comment, Our Solar system is Permanantly Aligned to the Centre of the Galaxy, it's called in Orbit!
Until Andromeda Arrives in about Three Billion years, There will be absolutly no change.
Will even that affect us? Possibly, but not much!
Don't Worry, be Happy!!
MC

The Knife Edge Galaxy Throws Astronomers For a Loop