Images of Earth at a lofty altitude of 118,000 feet (22.3 miles) are within reach of anyone with a little extra time, money, and ambition.

Take 21-year-old Josh Taylor (Surrey, United Kingdom) for instance, who launched a high-altitude “space balloon” last October, complete with a payload he constructed in his garage. 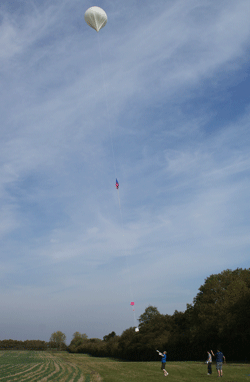 Composed of a polystyrene box lined with foil and wrapped with gaffer tape, the payload contained two cameras, a GMS module (for tracking position), hand warmers (for the cameras), and a bag of mustard and crest seeds (for scientific study). While one camera snapped photos of the journey — 2,800 in all — a 360-degree panoramic lens on the other camera captured the heady journey on video, which Taylor posted to YouTube after the makeshift craft returned to earth. Or, in this case, to water: it landed roughly 3 miles from shore in the North Sea.

Dubbed the “Taylor Made Space Balloon,” the project cost Taylor and his project partner, Edward Bishop (also 21 and Taylor's lifelong friend), around 100 British pounds each (a total of about $315 U.S.) and scored them international acclaim on news stations such as ABC and BBC.

The team is not the first to successfully construct a space balloon payload and record the adventure on camera. In fact, Taylor found his inspiration from a YouTube video of an American father-son duo that sent their iPhone 4 into space in 2010. The iPhone 4 was used as a GPS device to track the payload and find it once it parachuted down, while a camera recorded the journey. Although such balloons do not actually make it into space, often they can reach well into the Earth’s stratosphere, the atmospheric layer just above the troposphere in which we live.

“I thought it was so cool,” Taylor says, “I watched it thinking, ‘That’s awesome for such little money and without the need for big scientific corporations’ . . . that really inspired me and kick-started the project.”

Over the course of ten months, Taylor recorded his progress in detail on his blog JoshingTalk, which grew in readership as the launch date of October 1 approached. For a young man whose interests lie with media, not science, Taylor says the research he had to do in order to tackle his goal was rewarding.

“I did a lot of scientific learning throughout the project,” he says. “[I learned] things like the way helium works in the outer atmosphere and how pressure expands the balloon and what kind of materials work [in such low-pressure environments]. . . I loved the practical aspect of it.”

Taylor collaborated with the student-run society Cambridge University Spaceflight in England. The society provided various algorithms to predict landing locations and calculate “balloon burst potential” from info such as the balloon's mass and the density of gas inside. 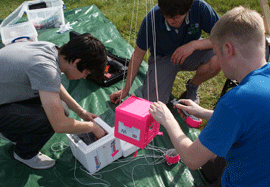 Unlike today's snazzy professional projects, the clean room for Taylor and Bishop's homemade space balloon was basically a plastic sheet.

For Taylor and his partner, helium was their gas of choice. Helium’s gas density is around 0.18 kg/m3, which is less than one-fifth as dense as room-temperature air at sea level (1.2 kg/m3). Helium is non-flammable, too, which makes it a popular option for high-altitude balloons, including the towering research balloons flown by the NASA Balloon Program that can be as tall as 480 feet.

For both space and weather balloons, altitude is uncontrolled — they continue to rise until they pop. The explosion is inevitable: as the balloon rises the surrounding atmosphere thins, decreasing the pressure on the balloon’s surface. With less atmosphere pressing on the balloon the bottled-up helium inside it expands, swelling the balloon as it does so: Taylor’s balloon was 5 feet in diameter at the time of the launch and may have expanded to 25 feet before bursting. Eventually the balloon reaches a height where the balloon’s material cannot stretch any more and the balloon bursts from the inside-out.

Space balloons offer a unique opportunity to anyone interested in science, art, or both. The basic physics involved provides an approachable platform for learning, as exploited by NASA’s BalloonSAT Exploring Program, and the video and photos can be breathtaking. As Taylor and his teammate proved, curiosity and perseverance — with or without a science degree — are the main ingredients needed to achieve great heights.

Although this space balloon is in pieces like the many before it, Taylor aims to launch a second in mid-2012. Sticking with the simple, inexpensive appeal of his first project, Taylor says that there will be more gaffer tape to come.

The River Thames, a hallmark of the southern English landscape, gleams here to the lower right of one of the 2,800 photos captured by the homemade "space balloon."

I wonder if the FAA places any limit on when or where such balloons may be launched.

Hi Justin!
Thought I might give you an answer as it's a good question.
I actually launched in Cambridge of the UK as there is blanket permission by UK HAS. We also had a NOTAM to launch on that day and made sure to check above our head for any planes flying over! 🙂
Combined with the low amount of flight paths over Cambridge and the open land, it made for a good choice of location for launch.
Hope that helps!
Josh
http://www.joshingtalk.com

How about a lightweight foil radar reflector? I'm sure the pilot of any plane that blundered into the vicinity of the balloon would be happy to get a good strong return echo so they can avoid the thing.

With the increasing scarcity (and eventually, price) of helium, has anyone considered going back to hydrogen, at least for unmanned balloons? For short-lived single-use balloons, is there any problem with H2 seeping through the envelope at a greater rate than He?

The U.S. supply of helium is running dangerously low due to Congressionally mandated price controls, deliberately designed to use up our supply. If helium's price reflected its scarcity, a child's party balloon would run about $100.

Absolutely. A covering a foil would be effective even if the chance of the paths crossing are minimal.
Hydrogen actually sometimes proves to be a better gas than helium so I'm sure in time it will become a more common occurrence. The main thing is the fact that hydrogen is very flammable, making pumping up the balloon on launch a dangerous situation.

Just an idea. How about a controlled venting system; ie timed venting of your ballon's gas to prevent or greatly delay the popping mentioned in the article. How high and/or far could such an improvement reach? (Could this be the begining of an amateur space race?)

Lots of good comments above. Let me point you to this URL

Ron Meadows has recently set the amateur balloon height and distance records. He uses hydrogen vs. helium for the extra lift. Also, for his transcontinental and transatlantic distance record, he filled his balloon such that it was a "floater"--it would rise to a set altitude where it would attain neutral buoyancy and then float more-or-less at that altitude. Eventually, the latex of the balloon is weakened by UV and it bursts.

Fun stuff! It's inspired me to get my ham license so I can get into this hobby!

One small correction: Josh sent up mustard and cress (not crest) seeds. Josh, did you plant the seeds? I hope you'll enjoy cucumber and space-watercress sandwiches later this year.

My 6th graders will be participating in 2 balloon launches this spring. We get to conduct our own small experiments with two of our payloads, but the students haven't really come up with any ideas and our deadline is drawing near. Does anyone have any suggestions? We would be very grateful.

BMayfield- Controlled venting I believe is a fairly new buzz with high altitude ballooning groups. Alot of them do this in order to cause the balloon to float rather than rise if they are undertaking a cross-country (literally!) journey.
I think if a balloon were to just rise, it would equal a certain pressure equilibrium therefore not rising any higher....
Then again you know as much as I do! We're all in it to learn. 🙂

Mike- There are some brilliant launch attempts going on all the time! Keep us updated.

Anthony- The seeds were provided by someone who funded my project with some money and therefore has gone back to him to grow. I do believe he is currently growing them and as yet, I have not seen any unusual giant sized plants sprouting from his chimney. ;D

Kaci- I've got a helpful guide I sell on my site ($2) to help me fund my next project plus it has all the details on how to do your own launch. Please feel free to email as well , should you need help.
Be creative! Why not send up your own plant seeds but this time exposed to the elements?

Thanks for the comments. Unfortunately my last comment did not post for some reason....maybe because it was so long!
Keep the discussion rolling though as some really interesting thoughts are being shared.
Please do feel free to get in contact with me (details on my site) and I hope we can continue to enjoy the projects.

It might inspire suggestions from your students if they knew that that the air pressure at 100,000 feet approximates the air pressure that humans would be exposed to on the surface of Mars.

Nice Job Josh! We've been doing near space missions for 5 years now through our Far Horizons program at the Adler Planetarium. We've recently set up a blog to share our experiences with anyone interested in doing their own launches at farhorizonsproject.com. As you showed, Josh, it's easier than you think, yet there are still challenges.
Kaci - there are many interesting experiments you can try. At 100k feet the pressure is 1% of ground level, radiation is about 60x ground rate and on the flight up we've seen temps lower than -70C.
Justin - there are specific FAA rules about HAB launches (seach: FAA 101.31). If you follow their simple safety and maximum payload mass limits, you can launch without needing government approval.
Have fun in the Stratosphere!