More than 30 years ago — April 12, 1981, to be exact — I stood in awe and cheered like crazy as Columbia rocketed skyward from Florida's Kennedy Space Center and inaugurated the Space Shuttle era. So when today was set for the shuttle's final launch, I just had to be there.

Much has been written elsewhere about the shuttle's legacy — its many successes, tragic losses, high cost, and dominance of U.S. space activity for two generations. An Associated Press analysis notes that the shuttle program cost $196 billion over the 40 years since its inception. So I won't dwell on all that here. Instead, let me offer a few reflections and recollections.

I'd forgotten how many people come out to watch these high-profile launches. The official estimates of the throngs that lined every roadway for miles ranged from 500,000 to 750,000. I got to see quite a few of them as my rental car inched toward KSC in the predawn darkness. 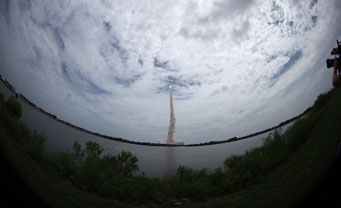 Thanks to a tropical storm system churning in the Caribbean, the weather was iffy for the past two days. But as the day dawned and the ground continued to stay dry, optimism grew inside and outside the control center for a "go". Atlantis cleared the tower this morning at 11:29 a.m. EDT, near the end of a 10-minute-long window. The 135th and final Space Shuttle mission was under way.

I'd also forgotten how many people it takes to launch these amazing machines. Thousands of hard-working engineers and technicians went through their extensive checklists for the last time. Some of the old-timers have been with the program since the beginning, and this final climb to orbit must have been especially bittersweet. Thousands of them, young and old, will lose those coveted jobs in the weeks and months ahead.

It's astounding to see a Space Shuttle launch in person. You can't hear the countdown when you're outside awaiting liftoff — instead, you just have to watch for the burst of smoke that pours from the rocket's base. The three main engines fire first, while everything remains bolted to earth. But once the silo-shaped solid rocket boosters (SRBs) are lit, the "stack" veritably leaps off the pad. 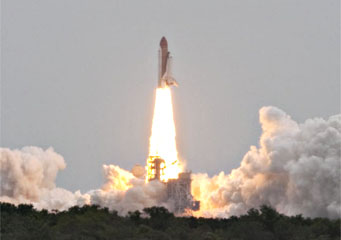 The Space Shuttle Atlantis clears the tower at Launch Complex 39 in Florida for the final time on July 8, 2011.

I'm always amazed by the long, brilliant dagger of flame coming from those engines. Photos and videos just don't do it justice. The entire craft is 184 feet (56 m) tall, but the flames seem to extend three times as long. It's an overused cliché, but the shuttles really do (or did) ride a pillar of flame into the sky. Then the sound envelops you — not just a loud roar but pounding, pulses of energy that you feel in your gut.

A lot of people in and out of NASA are worried about "what's next" for human space exploration. The International Space Station will continue, of course, at least through the end of this decade. But with the shuttle program's end, American astronauts won't be rocketing to orbit atop American-built boosters. Instead, they'll be hitching rides, for a negotiated fee, aboard the Russians' tried-and-true Soyuz system.

One thing I haven't forgotten is that this won't be the first hiatus for NASA's human space program. We sometimes lose sight of the six-year gap between the last launch of an Apollo capsule (which docked in orbit a Soviet-built Soyuz) and Columbia's inaugural flight in 1981. For now NASA has its sights set on developing a Multi-Purpose Crew Vehicle, but there's considerable debate about whether it represents the best "next step" for the U.S. effort.

In the meantime, there's plenty of space exploration in the offing. Soon NASA will be launching its twin GRAIL spacecraft to the Moon and dispatching the Mars Science Laboratory Curiosity to the Red Planet. Commercial enterprises like SpaceX (which has a dedicated launch pad here at Cape Canaveral), Virgin Galactic, and others promise to give everyday citizens the thrill of going to space.

Our future in space is assured. NASA might be in for a rough few years as it retools and reorganizes, but years from now I'm certain to return to Florida once again to witness another astronaut-tipped American rocket climb into the sky and the black beyond.

I /wish/ I fit the definition of 'every day citizen' implicit in the penultimate paragraph. How much for a sub-orbital flight? $50k? $100k? Most of the every day citizens will be sticking with IMAX movies ...

I was there and it was so cool. The sound didn't reach us until about 3-5 mintues later after losing sight of the shuttle into the clouds-the news is saying 40 seconds into the lift-off. We were on the water @ Indian River Lagoon so we figure we were about 8 miles away.

So long manned-space flight, hopefully America will be a leader some day again.

I am swiss, but lived in the US from 1980-84 and was in Edward in April 1981 to witness Columbia's 1st operational landing a few days later. I didn't hear the roar of the launch but heard the double bang of the approach (although I was in Florida in December 1972 to hear the roar of Apollo 17's launch). Therefore I do have to struggle with the idea that no longer will we be able to watch the awesome sight of a Shuttle ascent. I also do hope there will be a future for American Manned Space Program, although one has to admit that a lot (if not more) can be achieved through robotic exploration.

I've never witnessed a spacecraft launch or landing, but I grew up watching Apollo on TV, and I've followed the Space Shuttle program throughout my adult life. Human space flight has a special place in my heart, and on an emotional level I hope that people from the US and the rest of the world will continue exploring space in person. But I agree with Dan's comment above, that a more rational cost-benefit analysis clearly favors investing in lots of robots rather than a few human missions. And I see absolutely no justification for wasting precious resources and emitting tons of carbon dioxide to send a few rich people on brief suborbital joyrides.

I was there watching the launch, too. It was my first ever, and - of course - last. It's something I've wanted to see since I was a kid, and now I can finally cross it off my ""bucket list". On the day of the launch I was so euphoric that nothing could bring me down. The reflections on what it all means will take a little longer. But I can't help thinking that the era of manned space flight - at least by the United States - is over. America, too, can cross it off its "bucket list". Even if NASA succeeds in outsourcing its manned orbital launches to commercial companies, what then is there to do for NASA manned space? It will be reduced to a long-term development program - with no goal or destination - that may "someday" get us to Mars. You would have to be naive indeed to not know that the easiest things to cut are long-term R&D programs with no immediate payoff. So, godspeed, Atlantis ...

The Space Shuttle Program should continue with NASA being a full participant and not a paid passenger. Closing this program is a reversal of progress: we will fall back in testing of technology, and interest in school science programs that ignite young minds in considering space exploration as a possible course of study with expectations of traveling to other worlds.

In the future we may need of our own technologies to protect our defenses. What if an attack was to come from space? What if a foreign government installs a satellite and decides to attack America, a first strike. We’d be like sitting ducks without our own eyes up there to prevent this scenario. We can’t rely on another country’s hospitality to gather information for us. What I'm saying is that we should not just think as NASA as a space program but rather the first line of defense against an attack from any country whose space program is alive, running and better prepared than ours. And, President Obama is giving them that? No disrespect intended.

NASA should fight harder for the funding needed and the President should take a look up at the quiet sky and envision it someday filled with friendly fire. President Kennedy had a vision of pure exploration and the images on Star Trek never mentioned us as being tourists in our own space program. President Kennedy also seemed to see the future of the possibility of an attack from a foreign entity, and not necessarily from an ET visitor. As for Star Trek, it makes sense to continue exploring but within our own NASA’s Space Shuttle Program and not wait for a ride to the stars. We should fight to maintain our participation in the shuttle program - it is our survival.

I visited astrobites.com and will put on my favorites list! It was wonderful remembering Star Trek's Enterprise being honored - I was in my 20’s when that happened. I remember the first moon visit and how my family was clued to the T.V. watching Neil Armstrong in 1969 on the Appollo 11 setting foot on the moon. I will never forget the fear and exhilaration of that moment - Man walking on land not his own.

Again, I say the NASA Space Shuttle Program is vital, necessary and our country's future. It must not die because one presidential administration feels the money is not being well spent - but should think instead that the money is insuring That Spark of Inquisitiveness in all of us, to Explore and Discover, is being made possible through funded science programs that affords this opportunity. To stop funding is actually killing young minds from flying out of books and into the future. America cannot sustain itself in science and technology without investing in NASA’s Space Program.

I say we put our minds together and petition to reinstate the Shuttle Program with a stipulation that NASA staff travel around the country, to every school, rich or poor, and encourage young minds (or college age) to take a chance in science exploration – bring hands on equipment as tools of learning; give vouchers to inner-city youth so they can go to space camp or bring space camp to inner-city schools. Invite parents to star parties and involve the parks department to set up telescopes in city parks. Do all we can to insure young minds understand the importance of exploring outside of our world – keep that Spark alive. Yes, we can share the International Space Station, but we must not take a taxi to get there – we use our own car (shuttle)! And, I am not against any other country’s space program – I just want to make sure ours is still in front. It is a small planet and we are all in this together. I hope Mr. President is reading this – Hi!

Can Dunlap Obervatory Be Saved?