How to Help Hubble

Astronauts aboard the shuttle Columbia released the Hubble Space Telescope back into free flight after completing a series of repairs and upgrades on the last servicing mission in March 2002.

Readers of Sky & Telescope magazine and visitors to our Web site have been asking what they can do to help save the Hubble Space Telescope. This follows NASA administrator Sean O'Keefe's January 16th announcement that there will be no more shuttle missions to maintain and upgrade the orbiting observatory (see the articles linked at the bottom of this page). O'Keefe handed down his decision as a fait accompli, so it seemed pointless to object to it. But the astropolitical landscape has been shifting almost daily, and it now seems that an outcry by astronomers, the US Congress, and the public could force O'Keefe to reconsider — and maybe even reverse — his decision. 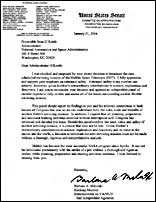 Click on this image to see a legible facsimile of the letter that Sen. Barbara Mikulski (D-MD) sent to NASA administrator Sean O'Keefe on January 21, 2004.

The most significant development is a January 21st letter from Senator Barbara Mikulski (D-Maryland) asking O'Keefe to "appoint an independent panel of outside experts to fully review and assess all of the issues surrounding another Hubble servicing mission...and to report its findings to...both houses of Congress." In a statement issued the next day, the American Astronomical Society (AAS) endorsed Mikulski's call for a public discussion of the pros and cons of servicing Hubble in the new era of safety consciousness that follows last year's loss of the shuttle Columbia.

O'Keefe is not obligated to honor Mikulski's request. NASA Headquarters spokesman Doc Mirelson declined to say when the administrator might reply to her letter. Senatorial aide Amy Hagovsky says that Mikulski "will wait and see what NASA's response is before she determines what her next move will be." Hagovsky suggests that anyone wishing to express an opinion about the cancellation of further Hubble servicing missions should write to O'Keefe directly, and also to their representatives in Congress. 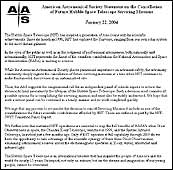 Click on this image to see a legible version of the statement issued by the American Astronomical Society on January 22, 2004.

Before writing, make sure you familiarize yourself with the issues. Space Telescope Science Institute director Steven V. W. Beckwith describes the rationale for cancelling further Hubble servicing missions, as explained in a briefing by O'Keefe to project officials on January 16th, in a letter on the STScI Web site. Jonathan Bagger, chair of the physics and astronomy department at the Johns Hopkins University (which hosts STScI), outlines some relevant points in a message on the Advanced Camera for Surveys Web site. HubbleSite has a frequently-asked-questions page about the prospects for the observatory's future if there are no more servicing missions. The AAS has set up a public-policy page on its Web site to provide additional information as it becomes available.

The AAS offers advice on how to contact Congress, including links to Web sites where you can find the names and addresses of every US representative and senator. The following senators and representatives play particularly important roles in funding NASA's space-science programs and science in general. If you are a registered voter in their state and/or district, your timely input (preferably via e-mail) could be especially valuable.