New Hubble images are heating up the debate on the nature of dark matter in the Train Wreck galaxy cluster.

At least, that’s what astronomers thought.

To study dark matter, astronomers look for subtle signs of its gravitational presence around galaxy clusters using a technique called weak gravitational lensing. The dark matter’s gravity bends light slightly, distorting the apparent shapes and orientations of galaxies in the far background. Map these distortions, and you can map the invisible stuff causing them.

Abell 520 is a gigantic merger of several galaxy clusters 2.6 billion light-years away. It’s commonly known as the “Train Wreck.” and it’s a perfect candidate for this technique. Andisheh Mahdavi (San Francisco State University) first mapped its dark matter distribution by gravitational lensing in 2007, which to his surprise didn’t match the distribution of galaxies.

“There are a few of disturbing possibilities to explain the data, none of which is comfortable or a sure bet,” Mahdavi says. Perhaps the most disturbing explanation is that, somehow, some of the cluster’s galaxies had come uncoupled from their dark-matter anchors, leaving behind a dark matter cloud devoid of galaxies.

Before trying to explain the results, the team first wanted to make sure the result was real. “The signal in the original data was of moderate significance and the skepticism was justified,” says Arif Babul (University of Victoria, Canada), a co-author of the study. So the team has looked again with a better eye: the Hubble Space Telescope.

This time their results are highly significant, the team now led by Myungkook Jee (University of California, Davis) recently announced. The “dark core” at the center of the cluster still appears to be devoid of galaxies, and explanations are hard to come by. Could the case of Abell 520 cast doubt on the slippery nature of dark matter? 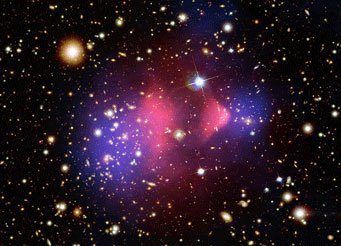 The Bullet Cluster is a textbook example of what merging galaxy clusters should look like. Hot gas (pink) sloshes around the galaxies (red, green, blue) that are anchored in dark matter (blue).

If dark matter is “slippery” — if it passes right through everything, including itself — it should remain unaffected by collisions between galaxies and clusters. The so-called Bullet Cluster is a textbook example: two galaxy clusters collided here, but while hot gas sloshed around the collision site, the galaxies and their dark matter blobs continued right on their way as if nothing had happened.

On the other hand, if dark matter is “sticky,” the dark-matter envelopes encasing the galaxies in Abell 520 may have stuck together rather than sliding past each other. “Sticky” dark matter would be a game-changer for cosmology.

“It's hard to imagine how dark matter particles could be more ‘sticky’ in the Abell 520 galaxy cluster than in, for example, the Bullet Cluster,” says Elizabeth Blanton (Boston University), a galaxy-cluster expert not involved with the study. “Other explanations for the observations seem more plausible at this point.”

Jee and his colleagues discuss several other possibilities, including the presence of a group of galaxies associated with the cluster, but this group would have to emit little light compared to its mass.

“We present a menu of possible explanations, all of which require greater scrutiny and all of which have some disturbing and uncomfortable aspects,” Mahdavi explains.

Another possibility is that the “empty” dark-matter cloud does contain galaxies but they’re too dim to have been seen by Jee and his colleagues. Preliminary results from a team headed by Douglas Clowe (Ohio University) suggest this may be the case.

Clowe and his colleagues once again trained Hubble on Abell 520, but for a longer exposure that netted twice the light. They also used multiple short-wavelength filters, allowing them to measure galaxies’ colors and better distinguish between background and cluster galaxies.

“Our preliminary dark-matter map contradicts the main conclusions of [Jee and Mahdavi],” says Maxim Markevitch (NASA Goddard), a co-author on the study, though he cautions that the results are still preliminary and have not yet passed peer review.

But the case isn’t closed yet. When Mahdavi and colleagues ran their own preliminary analysis of the same data, they found no disagreement with their previous results. The two teams are preparing their analyses for peer-review and publication. Meanwhile, the mystery of the Train Wreck cluster remains unsolved.

Abell 520 is a multiple train-wreck. It's much more complex than the Bullet Cluster, which is a simple head-on collision. I'd expect 520 to be much harder to interpret and model. The Jee et al. result is very interesting, but I'd keep an open mind on the interpretation.

I feel it is important to note that without dark matter, the big bang cosmology is a failure, i.e. no galaxies or stars form. Placing dark matter on the Periodic Table or showing that it exists in our solar system appears elusive.

Also, without dark matter the structure of spiral galaxies and of galaxitic clusters would break down. Being non-baryonic, it couldn't have a place on the table of the elements. Just what might it be? Next to it's massiveness, it's most fundamental property seems to be, elusivity.