It's hard to believe that 2½ months have passed since the crew of Atlantis wrapped up their extensive repairs and refurbishment of the Hubble Space Telescope. 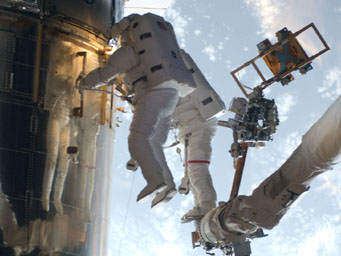 Astronauts Andrew Feustel (at left) and John Grunsfeld attend to repairs of the Hubble Space Telescope during the fifth and final spacewalk of the STS-125 mission in May 2009.

So when will Hubble get back to work? In a sense, it already has. When Australian amateur Anthony Wesley spotted the "powder burn" in Jupiter's atmosphere from an apparent impact on July 19th, Hubble managers hustled to turn its 94-inch (2.4-meter) eye on the new feature so that the just-installed Wide Field Camera 3 could take some snapshots.

But HST isn't yet fully ready to return to duty. Engineers are still stepping their way through the long "to do" list known as the Servicing Mission Observation Verification (SMOV), and a few glitches have come up.

For one thing, the Science Instrument Command and Data Handler — think of it as the router for Hubble's science data — acted up not long after the servicing mission concluded. (Remember: NASA delayed STS 125, the fifth and final Space Shuttle servicing mission, by some six months so that this last-minute replacement could be recalled from storage, checked out, added to the payload, and installed by spacewalking astronauts.) Fortunately, this anomaly resolved itself after engineers shut down the SI-C&DH and powered it back up.

A few days later two Hubble instruments, the patched-up Advanced Camera for Surveys (ACS) and the brand-new Cosmic Origins Spectrograph, hiccupped. Both have since resumed operation. 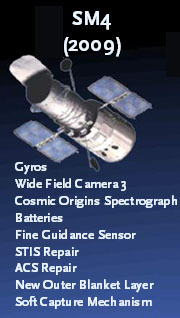 Servicing Mission 4, actually the fifth Space Shuttle visit to refurbish the Hubble Space Telescope, accomplished many tasks to extend the observatory's lifetime. Click on the image to see the mission's complete timeline.

Then on July 6th the Space Telescope Imaging Spectrograph shut itself down and didn't return to operation on July 28th. STIS still has a problem with its near-ultraviolet channel: a mysterious fluorescence on its optical window is creating detector noise (dark current) that degrades the instrument's performance.

All this might seem ominous for Hubble's prospects for long-term success. But according to Preston Burch, program manager for HST at NASA’s Goddard Space Flight Center, the team is just being cautious. "We want to be careful that we don't break something," he says. In fact, Burch seems quite upbeat because the post-repair checkout is actually quite far along.

Even NICMOS, the Near Infrared Camera and Multi-Object Spectrometer, will soon be back in operation after a year-long hiatus. On August 1st the instrument's finicky cryogenic cooling system finally responded to coaxing from ground controllers after many months of failed restart attempts. NICMOS must operate at very cold temperatures — at or below –321°F (77 K) — to ensure that its sensitive detectors are recording feeble infrared light from space instead of heat from its own electronics.

"If all goes well," comments Glenn Schneider, instrument scientist at the University of Arizona, "it will take about a month for NICMOS to cool down so that we can begin the re-enabling and recalibrating the instrument." 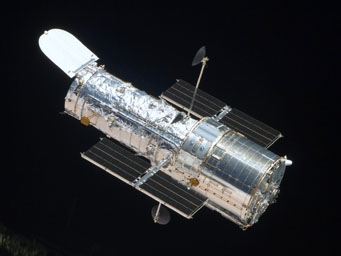 The Hubble Space Telescope looks eager to resume its work after being released by astronauts aboard the Space Shuttle Atlantis in May 2009.

"We're over the hump," Burch told me this afternoon, "and starting to do routine science operations." Within two weeks, he estimates, HST will be observing a third of the time, and that should rise to nearly full-time by early September.

Astronomers have already been zeroing in on deep-space targets with ACS and WFC3 that will showcase the orbiting observatory's enhanced capabilities. Circle September 9th on your calendars — that's when NASA managers plan to release some eye-popping new views from the rehabbed, restored, refurbished, and remarkable Hubble Space Telescope.