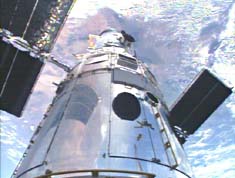 Astronauts aboard the shuttle Columbia had this dramatic view of the Hubble Space Telescope during the last servicing mission in March 2002. NASA administrator Sean O'Keefe's decision to cancel further visits to the observatory has angered astronomers and an influential US senator.

Astronomers and their supporters in Congress are beginning to fight back against NASA administrator Sean O'Keefe's surprising decision last Friday to cancel all further servicing missions to the Hubble Space Telescope. Citing concerns over the ability to fly the Space Shuttle safely to any destination other than the International Space Station, O'Keefe put the brakes on plans to perform maintenance and install two powerful new scientific instruments on Hubble in 2006, saying NASA would operate the telescope only until it becomes hobbled by a system failure, most likely in its pointing-control gyroscopes or its batteries (see "Hubble Gets the Heave-Ho").

As news of the cancellation spread among astronomers worldwide, anger began to set in about the way O'Keefe came to his decision — behind closed doors, using the same "top-down" management style that the Columbia Accident Investigation Board blamed in part for the loss of the shuttle Columbia last February. As frequent Hubble user Garth D. Illingworth (University of California, Santa Cruz) put it in an e-mail to Sky & Telescope, "A national icon should not be cut down without substantial public discussion."

Although O'Keefe presented the cancellation as a fait accompli, not everyone is treating it that way. Barbara A. Mikulski is the senior Democrat on the Senate subcommittee that controls NASA's purse strings, and Maryland, the state she represents, is home to both the NASA/Goddard Space Flight Center and the Space Telescope Science Institute. On January 21st she sent a letter to O'Keefe asking him to appoint an independent panel of outside experts to assess the risks, costs, and benefits of another Hubble servicing mission and to report its findings to Congress. "Given Hubble's extraordinary contributions to science, exploration and discovery and its value to the nation and the world," wrote Mikulski, "a decision to terminate the next servicing mission must not be made without a thorough, rigorous and comprehensive analysis." The American Astronomical Society's executive committee has voted to endorse Mikulski's letter. So far, O'Keefe has not responded.

Meanwhile, work continues to finish the two new instruments that were supposed to be installed on Hubble during the next shuttle visit. Some $160 million has already been spent on the Cosmic Origins Spectrograph (COS) and Wide Field Camera 3 (WFC3), and millions more on new gyros and batteries. Even as O'Keefe precluded further Hubble servicing missions, he asked astronomers to try to come up with a plan to use this equipment some other way. He specifically encouraged them to think about building a new, small space telescope that could be launched on an expendable rocket.

Frank Cepollina, manager of Hubble servicing at NASA/Goddard, has worked in the space program for 41 years and lived through the Apollo 1, Challenger, and Columbia tragedies. "In the spirit of exploration, we cannot allow ourselves to go into handwringing mode," he told Sky & Telescope. "We have to stay upbeat. We'll find a way to fly COS and WFC3 if the astronomers want to do it badly enough."