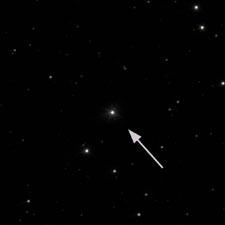 The Hubble Space Telescope captured this view of the 17th-magnitude star in the black-hole system GRO J1655-40. New observations show that the system was born in the plane of the Milky Way.

With the help of the Hubble Space Telescope, astronomers are tracking a rapidly moving black hole back to its birthplace. In the process, they are bolstering astronomy's long-held but largely unconfirmed theory that black holes are created when massive stars explode as supernovae.

Astronomers know of 10 binary systems in which a dwarf or giant star tightly orbits an invisible companion object that has more than 3 solar masses — a suspected black hole. It was presumed for decades that such stellar-mass holes are born when the core of a massive star runs out of nuclear fuel and suddenly collapses. "But there has been no firm observational evidence for this," says black-hole specialist I. Félix Mirabel (French Atomic Energy Commission and IAFE/CONICET, Argentina). "None," that is, "besides GRO J1655-40," a black-hole-bearing binary star in Scorpius.

GRO J1655-40 harbors a 5-solar-mass hole and a 17th-magnitude F-type subgiant star that orbit one another every 2.6 days. Since the mid-1990s astronomers have known that this binary system is approaching us at an anomalously speedy 140 kilometers per second. This already had led several theorists to conclude that the binary endured a supernova explosion, which somehow propelled the system from its birthplace toward our solar system. That theory was buttressed in 1999, when a group led by Garik Israelian (Astrophysics Institute of the Canaries, Spain) identified an excess of supernova-generated chemical elements in the spectrum of the subgiant star.

Enter the latest findings from Hubble. As Mirabel and five colleagues explained in Monday's Astronomy and Astrophysics, Hubble measured the position of GRO J1655-40 in 1995 and again in 2001. This revealed the F-type star's proper motion: 5.2 milliarcseconds yearly along the plane of the Milky Way — an amount far too small for ground-based telescopes to measure for so faint a star.

Mirabel admits that his finding doesn't much change the speed at which the binary system already was known to be racing through our galaxy. However, it does allow for "the possibility of tracking the black hole back to its birthplace," he says. His team also finds that the binary is following a highly eccentric orbit within the Milky Way's circular orbiting disk. "The high eccentricity implies that something happened to change the orbit, most probably a supernova explosion" says theorist Vassiliki Kalogera (Northwestern University).