Left: A small portion of the original Hubble Deep Field image, which the Hubble Space Telescope acquired in late 1995 to find the faintest galaxies yet. Right: The same piece of celestial real estate, imaged 6½ years later with Hubble's Advanced Camera for Surveys. Last May ACS serendipitously captured a supernova explosion (SN2002dd) that took place when the universe was slightly less than half its current age. The tiny sliver of light labeled 'Host?' may be the dying star's home galaxy.

Among the many hopes for the Hubble Space Telescope's newest instrument, the Advanced Camera for Surveys (ACS), is the discovery of dozens if not hundreds of exploding white-dwarf stars more than halfway across the visible universe. Those aspirations appear well founded. According to yesterday's announcement from the Space Telescope Science Institute, ACS bagged two Type Ia supernovae after just two months of operation.

SN2002dc and SN2002dd, both billions of light-years from Earth, were serendipitously discovered during test observations of the Hubble Deep Field, a tiny patch of sky in Ursa Major that the orbiting observatory plumbed for very faint galaxies in 1995. The HDF is "such a well studied field," says astronomer John P. Blakeslee (Johns Hopkins University), that the ACS team chose it for some of its first views. Sure enough, the images revealed very faint stars not present in the 1995 HDF snapshots. What's more, ACS acquired spectra of the "guest" stars, immediately fingerprinting each as a Type Ia supernova and measuring its redshift — the degree to which space has expanded since the star exploded eons ago.

Type Ia supernovae are special because they are standard candles, astronomical light bulbs whose distances can be measured because their wattage is known. And because they are extremely luminous, Type Ia supernovae can be used to gauge the how the universe's expansion has changed throughout much of cosmic history. Just five years ago supernova studies revealed that the universe's expansion is now accelerating, powered by a form of "dark energy" that's even more mysterious than the "dark matter" holding galaxies and galaxy clusters together. 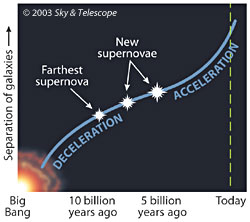 This graph shows the universe's early dark-matter-dominated deceleration and a more recent period of cosmic acceleration powered by still-mysterious 'dark energy.' Along with SN1997ff, the farthest yet, the Hubble telescope has found two new supernovae to help chart the universe's expansion.

Admittedly, a technical analysis of the first two ACS supernovae doesn't break any new ground, cosmologically speaking. However, according to Harvard University expert Robert P. Kirshner, it amply demonstrates that "the Space Telescope, with the new camera, is a terrific tool for discovering supernovae." And new leverage on dark energy may come from the world's most high-tech "digital camera" shortly. According to supernova hunter Adam G. Riess (Space Telescope Science Institute), a survey nearing completion has bagged a half dozen well-studied Type Ia supernovae with redshifts above 1.2. Riess and his collaborators may pinpoint how and when the still-controversial cosmic acceleration started when they complete their analysis of these beacons later this year.