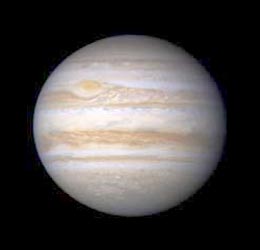 A true-color image of Jupiter taken by NASA's Cassini spacecraft on October 8, 2000. South is up.

On December 30, 2000, as calendrical purists prepared to ring in the 21st century, the Cassini spacecraft was slipping past Jupiter en route to its 2004 arrival at Saturn. Although it came no closer to Jupiter than 9.7 million kilometers, Cassini had been programmed to take full advantage of the flyby and snapped 26,000 images of the planet, its tenuous ring system, and several satellites over a six-month period.

After analyzing these for more than two years, mission scientists have gained new respect for how complex a place Jupiter really is. For example, it's long been thought that gas rises in the planet's bright zones and descends in its darkish belts, a notion seemingly confirmed by images from the Voyager flybys in 1979. But this paradigm has been shaken by Cassini's scrutiny, which reveals that large, towering plumes of fast-rising gas are scattered throughout the belts — and absent in the zones.

This role reversal had been suspected in images returned since 1995 by the Galileo orbiter, but Cassini's views (which reveal cloud details as small as 58 km) are much more convincing. "It's opposite the expectations of the past 50 years," admits Anthony D. Del Genio (NASA/Goddard Institute for Space Studies). He and other members of the mission's imaging team describe their findings in the March 7th issue of Science.

The mechanics of this process are still hazy. The convective churning is thought to originate deep in Jupiter's troposphere, at a pressure of about 5 bars, where the condensation of water releases heat to drive upward movement. Upwelling might be occurring in the bright zones too, only to be masked from our view by an opaque white layer of ammonia crystals higher up. Another puzzle is why lightning on Jupiter is most prevalent at high latitudes, yet the rising plumes are clustered in the belts nearest the equator. Atmospheric specialist Larry W. Esposito (University of Colorado, Boulder) believes it's "too soon to say" whether these storm clouds are delivering enough heat from Jupiter's interior to drive the planet's distinctive banding and swirling localized eddies. 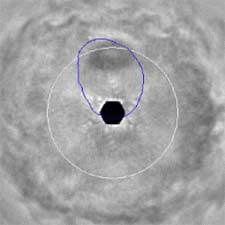 Meanwhile, mission scientists are trying to understand the appearance of a large dark oval — as big as the Great Red Spot — near Jupiter's north pole. The huge feature, evident only at ultraviolet wavelengths, came and went during Cassini's six-month encounter. The dark oval's location roughly coincided with where auroras are strongest in the polar region, so perhaps it contained an ultraviolet-absorbing haze produced high in the stratosphere by energetic particles cascading in from the magnetosphere. But the hows and whys of the spot's formation remain unclear.