New observations are revealing the hard-to-see structure of the galaxy we call home. 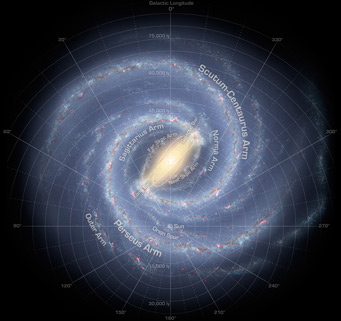 An artist imagines what the Milky Way might look like, based on data gleaned from Spitzer. The illustration shows two major spiral arms and a central bar. The Scutum-Centaurus arm starts between the Sun and the galactic center, then wraps around to the far side of the galaxy.

It’s hard to see where you are when you’re lying in the belly of a whale. The situation is much the same for astronomers on Earth, circling a star embedded in the disk of the Milky Way Galaxy. Dust and gas block our view of the galaxy’s center, and discerning the spiral arms on the other side is difficult at best. It’s harder to map our own galaxy than any of our neighbors — astronomers don’t even agree on how massive our galaxy is.

But astronomers have their ways of peering through the fog. At last week’s meeting of the American Astronomical Society in Long Beach, California, astronomers announced several new results based on these efforts which together help define the Milky Way’s structure, including the discovery of star-forming regions outlining spiral arms and a newly released survey of the mysterious magnetic field that permeates our galaxy.

Finding the Far Side

Stellar nurseries such as the one found in the Orion Nebula (M42) are a boon to astronomers trying to map the galaxy. The Orion Nebula lies just 1,300 light-years away, so it’s a beautiful sight through binoculars or a telescope. More importantly for Milky Way mappers, M42 and other star-forming regions like it emit radio waves, too. Dust and gas stop visible light in its tracks, but not much bothers radio signals, which can traverse the whole length of the Milky Way. 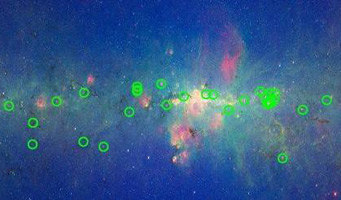 The HII Region Discovery Survey has more than doubled the known number of star-forming regions in the Milky Way, helping to map out our galaxy's spiral arms. This image shows just a tiny region of the Spitzer Space Telescope's mosaic of the galactic plane, with individual star-forming regions are circled in green. Visit HRDS's website to see the full extent of this image.

The intense radiation from massive newborn stars strips hydrogen atoms of their electrons, and when the electron-proton pairs reunite, they emit radio waves at specific wavelengths. Thomas Bania (Boston University) and Loren Anderson (West Virginia University) are part of the team surveying the sky for radio sources at these wavelengths using the NRAO’s Green Bank Telescope in West Virginia and Arecibo Observatory in Puerto Rico. The resulting HII Region Discovery Survey identifies Orion analogues in the farthest reaches of the galaxy.

“At this distance from the galactic center, there’s not a lot of ongoing star formation,” Anderson says. The radio survey may have actually reached the galaxy’s edge — not much in the way of stars should exist beyond this point. “This star-forming region isn’t the tip of the iceberg, it is the iceberg.”

In 2010, Jim Jackson (Boston University) discovered a gas cloud so dense that it blocked background starlight, appearing dark in infrared images (hence the technical name, infrared dark cloud). The cloud was 260 light-years long and only 2 light-years wide, an odd shape that prompted extra attention and even a name: Nessie.

Nessie, a very long, very thin cloud of dense gas and dust, extends along the length of this image. The cloud is at least 300 light-years (and possibly as much as 1,400 light-years) long, and only 1 or 2 light-years wide.

Now a new study led by Alyssa Goodman (Harvard University) shows that Nessie lies like a “spine” along the Scutum-Centaurus arm. To calculate Nessie’s exact position, Goodman’s team had to calculate the Sun’s exact position as well. The Sun lies just slightly above the plane of the Milky Way, allowing us to observe neighboring spiral arms. The discovery that Nessie is a marker of galactic structure suggests that other such “spines” might exist.

Goodman’s re-analysis of Spitzer Space Telescope images also shows that Nessie is much longer than previously thought, likely twice as long as the original estimate; an optimistic estimate puts the cloud at as much as 1,400 light-years, roughly the distance between us and the Orion Nebula. 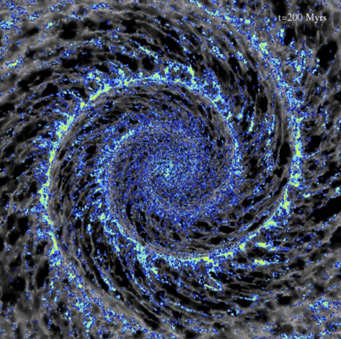 A simulation by Clare Dobbs (University of Exeter) traces the formation of the Milky Way's spiral arms. Density in the image increases from blue-black to yellow-white; the yellow "spines" along the spiral arms suggest Nessie-like structures.

“The ‘extended’ length of Nessie is quite reasonable based on the Spitzer image,” says Jonathan Foster (Yale University), who was not involved in the study. “The ‘optimistic’ length? That's a bit like pictures of the Scottish Loch Ness monster — you can squint and see what you want to see.”

Even a twice-as-long Nessie leaves astronomers with a very long, very thin cloud to explain. Current simulations aren’t up to the task — they don’t yet have the computational power to recreate structures as thin and dense as Nessie. But less complete simulations suggest that Nessie-like structures are part and parcel of the
process that produces spiral arms.

Between the Stars: Mapping the Magnetic Field 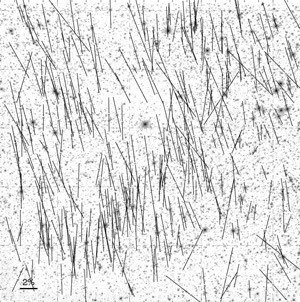 An outside observer would point at the Milky Way’s starry spiral as its most noticeable feature. But between the galaxy’s stars swirls a weak interstellar magnetic field that could play a vital role in star formation. The magnetic field has been largely unstudied because it’s so hard to observe, but the team behind the Galactic Plane Infrared Polarization Survey (GPIPS) hopes to change that.

GPIPS uses an infrared camera on the Perkins telescope at Lowell Observatory to measure polarization of starlight in 10 × 10 arcminute images. Starlight is (usually) unpolarized, meaning that light waves are oriented every which way. But as starlight scatters off magnetically aligned dust, the waves orient themselves preferentially in one direction. By measuring the polarization in 3,237 star fields, the GPIPS team records the magnetic fields that loop and swirl in a large part of the Milky Way. 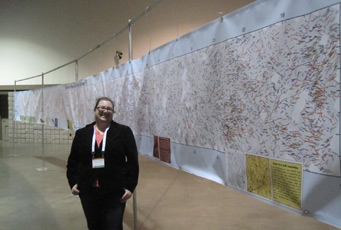 Ren Cashman, a graduate student at Boston University, poses in front of the 40-foot poster of the GPIPS survey.

Dan Clemens (Boston University) presented the observations collected by the survey so far as a stunning 40-foot poster at the AAS meeting. The survey will cover 76 square degrees (about 2% of the sky) once it’s finished in late 2013. It’s too soon to say what these data will reveal, but astronomers hope they’ll provide a better understanding of what role magnetic fields play in star formation and galactic structure.

This is really interesting work, thanks for the report. I would appreciate a link to a larger, higher-resolution image of R. Hurt's illustration of Milky Way structure. One of Hurt's illustrations was an astronomy picture of the day a few years ago: http://apod.nasa.gov/apod/ap080606.html . Is this the same image?