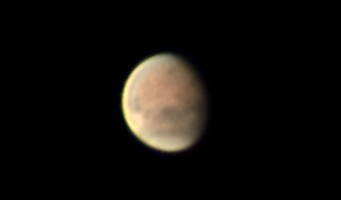 Mars's airborne dust is visible as lighter-colored regions as seen in this view taken by Donald Parker of Coral Gables, Florida, on the morning of July 11th. The dust obscures the polar cap at the south pole (bottom). The image was taken with a 16-inch reflector under skies of fair conditions.

The large dust storm that kicked up on Mars in late June is affecting all the missions currently in operation on and around the Red Planet. For example, the Mars Exploration Rover Opportunity had been poised to enter Victoria crater, but the Sun-blocking dust has significantly reduced the power generation of its solar panels. Activity will wait for the dust to settle.

Orbiting imagers can't see through the dust either. Nevertheless, the Thermal Emission Imaging System (THEMIS) aboard NASA's Mars Odyssey orbiter has been tracking the storm's development. The infrared instrument revealed the planet-wide spread of dust in just a week. See the news release for images showing the progression of the spreading dust.

Dust storms on Mars tend to develop when the planet is closest to the Sun, call perihelion. At times like now, the southern hemisphere receives the full brunt of solar heating.

Even if this becomes a global dust event, the atmosphere should calm by the time NASA's Phoenix lander arrives in May or June 2008 — providing it launches on time.