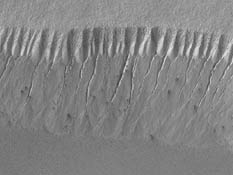 The rim of this Martian scarp near the south pole bears features that appear to be recent erosion by liquid water. A study announced last week suggests that these features are due to surface melting of ground ices and subsequent debris flows during a time when Mars's tilt angle to the Sun was much greater than today. The image measures about 2.8 kilometers (1.7 miles) across.

Scientists may be closer to answering the question of
how enigmatic Martian gullies form. According to research presented
by François Costard, François Forget (University of
Paris), and others last week at a meeting of planetary scientists,
changes in the planet's obliquity (polar tilt) can lead to melting
of shallow subsurface ice.

Forget notes that in Jameson Land, Greenland, the tops
of permafrost layers between 80 and 220 meters thick can thaw episodically
during the summer. Near the poles, as the ground soaks in more sunlight,
the mean soil temperature can rise above freezing, and gullies form
as a result. "These gullies don't involve water runoff, but are instead
debris flows — the melt of subsurface water mixed with rock,"
says Forget.

Permafrost regions on Mars may be analogous. Mars's
obliquity is known to cycle radically between 0° and 60°.
Currently the planet is tilted at 25.2° to its orbit. But during
periods of higher obliquity (above 30°) the poles can experience
enough time in the Sun to warm the topmost ground layers above freezing.
The model also explains why the Martian gullies tend not to congregate
near the equator. During periods of high obliquity, the poles get
more Sun than the planet's midsection.

Costard and Forget's theory argues strongly against
several existing scenarios used by scientists to explain the gullies.
One largely debated idea involves the existence of subsurface aquifers
that are capped by ice plugs. When a plug cracks, the water comes
out, forming a gully. But no one could explain how the aquifers could
stay liquid within a permafrost layer given Mars's limited geothermal
activity. Outflows of thawing carbon dioxide ice have also been proposed.

The model isn't flawless though. A major hurdle to overcome
involves keeping water liquid on the surface. Given the current atmosphere
of Mars, any liquid water should rapidly evaporate away. A possible
solution is that during periods of high obliquity, Mars's atmosphere
is thicker, perhaps due to the sublimation of polar carbon dioxide
ices (see story below). A thicker atmosphere could maintain liquid
water long enough to form the gullies. 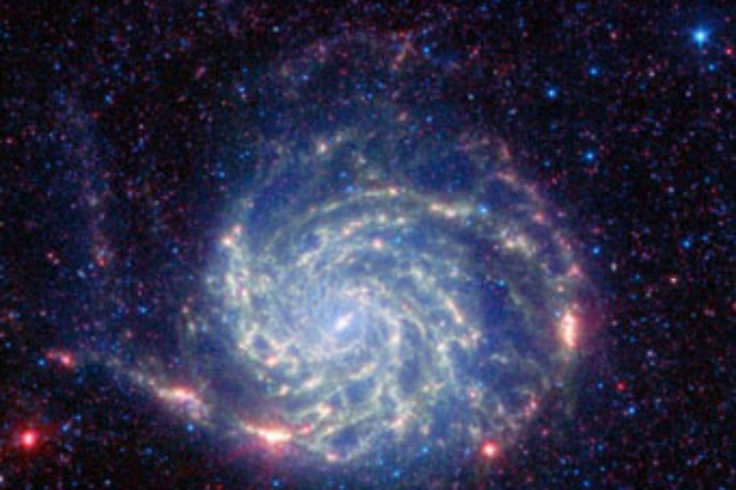 Phobos: A Chip Off of Mars?