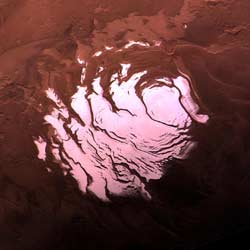 This mosaic of 18 images from Viking Orbiter 2 shows Mars's residual south polar cap, which consists mostly of carbon-dioxide ice. But the radar instrument on the Europe Space Agency's Mars Express orbiter has revealed that large deposits of nearly pure water ice lie below the cap.

Even as the durable rovers Spirit and Opportunity continue to trundle across Mars, the Mars Express spacecraft has been exploring the Red Planet from above. Built by the European Space Agency, the heavily instrumented craft carries a radar experiment, known by the acronym MARSIS, designed to probe deeply beneath the Martian surface and reveal the true extent of the planet’s ice reserves. Scientists already knew that both of the planet’s permanent polar caps contain abundant water ice — but they want to know how much more lies hidden underground.

Mars Express arrived on the scene in December 2003, but worries about the experiment’s long, whip-like antennas delayed the start of radar sounding for nearly two years. The first area to get close scrutiny by MARSIS was the broad expanse of layered deposits surrounding the northern cap. By last November the radar soundings turned up a relatively pure "glacier" of material, presumably ice and at least 1 kilometer thick, beneath the cap itself and the entire layered region beyond its outer margin.

More recently, a shift in Mars Express's orbit has allowed MARSIS to probe the planet's south pole. There the buried ice extends down to 3½ kilometers (2 miles) under the cap in some places. Water ice appears quite transparent at radar wavelengths, and the ease with which MARSIS's signal penetrates the polar terrain suggests that the ice is relatively pure. "There's at most only a few percent of impurities," team coleader Jeffrey Plaut (Jet Propulsion Laboratory) told planetary scientists meeting in Houston this week.

Potentially more exciting is MARSIS's discovery that huge quantities of ice may underlie a large plain beyond the southern cap called Dorsa Argentea, which covers 3 million square kilometers, about 2% of the planet's surface. Geologists originally thought Dorsa Argentea was a volcanic plain, but James W. Head III (Brown University) and others recently realized that a broad ice sheet must lie beneath its dusty surface. Plaut reported that MARSIS has found multiple layers stacked beneath Dorsa Argentea to depths of up to 500 meters — and if they’re all ice, they represent a reservoir large enough to cover the entire planet with water to a depth of about 10 meters (30 feet).

MARSIS can’t determine whether buried ice lies very close to the surface. However, NASA’s Mars Odyssey orbiter can, and it found that water ice, water-bearing minerals, or both lie less than 1 meter down virtually everywhere poleward of 60° latitude in both hemispheres. Whether this ice-rich terrain represents the tip of a vast subterranean iceberg will be revealed in the coming months by the more sensitive radar sounder aboard NASA’s Mars Reconnaissance Orbiter (MRO), which began orbiting the planet on March 10th.

With the arrival of MRO, the count of spacecraft now either orbiting Mars or crawling on its surface has climbed to six.