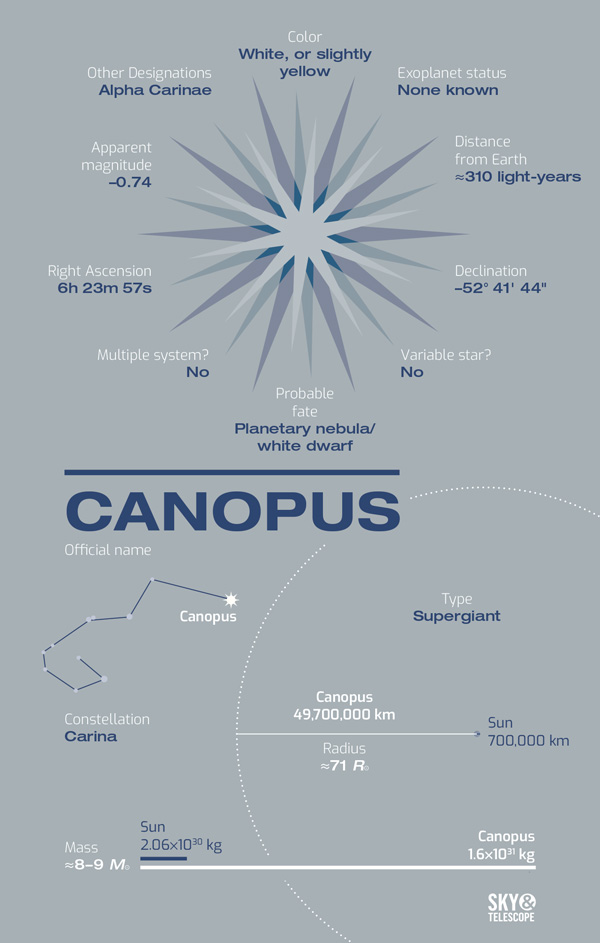 Canopus is the second-brightest star in the night sky, edged out only by Sirius—but don’t take that as an indication that Canopus is the weaker of the two. With a mass about eight or nine times that of the Sun, Canopus sports an impressive girth more than 70 times the Sun’s, and a luminosity more than 10,000 to 13,000 times brighter than our host star. Canopus also maintains a very high surface temperature of 7,350K, which is roughly 3,000°F hotter than the Sun’s visible surface.

But in the same way that the light from stars like Deneb or Polaris loses some of its punch during the long trip to Earth, the vast distance of 300 light-years separating us from Canopus diminishes its apparent output. The star looks bright, for sure, but not nearly as bright as it might appear if it were closer. Nevertheless, Canopus is still a brilliant sight and appears roughly half as bright as Sirius. This high luminosity —combined with its isolation from other bright stars — made Canopus a good navigational guide star for the Voyager space probes.

Canopus is the brightest star in the southern constellation Carina. In antiquity, the stars of Carina were part of a huge constellation called Argo Navis, the Ship Argo. But this constellation was so sprawling that modern astronomers broke it into three separate groups, each named for a section of the original ship; Carina, the Keel; Vela, the Sails; and Puppis, the Poop Deck or Stern. So if you see a constellation Argo in old atlases, it will contain Canopus.

Canopus is not visible from much of Greece (or much of Europe, for that matter), so it lacks some of the traditional Greek mythology common to other bright stars. One Greek story that is attached to Canopus has to do with the Trojan War hero Menelaus, who visited Egypt and “discovered” the bright star, which he then named after the ship’s navigator Canopus. The story feels as though it might have a kernel of history in it.

In China, the star appears low in the southern sky (if it’s visible at all; the star is out of reach of northern China), so Canopus became associated with the “Old Man of the South Pole,” a gentleman with a white beard (a similar concept existed in Japan). The star is a symbol of longevity and happiness.

The star features in several other Southern Hemisphere cultures. In one version of a Navajo myth from the southwestern U.S., Canopus was known as “M’ii Bizo,” a star that the Coyote had placed low in the southern sky over his mountain. Polynesians knew it as “Atutuahi,” and used the star as a navigational aid during long ocean voyages out of sight of other landmarks.

The star also has various names and mythology associated with multiple cultures throughout Asia, , and likely gets its name from the ancient Egyptian city of Canopus.

How to See Canopus

If you live in the U.S., you’ll probably have to do a little travelling in order to find a clear view of Canopus, since the star sits far enough south that it’s invisible from a good portion of the continental U.S.

Even in southern states, Canopus hops only briefly over the horizon during the fall and winter months. In theory, the star rises for any location south of about 37°N, which would include roughly the lower third of the continental U.S. But as any experienced astronomer can tell you, locating astronomical objects low on the horizon is challenging. Besides topography, trees, and buildings that obscure the lowest portions of the horizon, atmospheric conditions are generally worse closer to the ground, making low-angle observations difficult or impossible. However, the farther south you go, the higher Canopus rises in the sky, and the better your chances of obtaining a clear view will be. (Winter vacation in south Florida, anyone?)

Finding Canopus when it is visible should be no problem — it’s the second-brightest star, after all. During the winter months, find Orion and take a short jaunt southwest to Sirius. From there, it’s a straight (but fairly long) jump down to Canopus. While you’re looking, you might grab a camera and tripod; Sirius and Canopus make a nice photo together, and it’s something that not everyone gets to see.

Canopus and Mirzam (Beta Canis Majoris, the bright star that is in the the top of the front "leg" of the Great Dog, Canis Major), have about the same Right Ascension. Look due south when Mirzam crosses the meridian, and Canopus will be almost directly below it.

Hi Daniel, nice article. Just fyi, the e-mail with the link to your blog page says "Canopus is only visible from the Southern Hemisphere". You might want to fix that, or at least correct whoever wrote it 🙂
Clear skies!

Daniel
I agree with Raymond, that the statement that Canopus can only be seen from southern hemisphere needs to be deleted or at least re-written. I have seen Canopus several times from N33deg 30min latitude. Just need clear skies and low horizon. Rick Hull

Thanks, all - that was an error in our email newsletter, but the article here is correct.

Thanks Monica. Hopefully whoever wrote it learned a lesson 🙂

Except for the Navajos having a Southern Hemisphere culture.

I on the other hand have still never seen Canopus. Gotta do that one day...

Beta Canis Majoris and Sirius may well have a very similar RA but Sirius to Canopus is much more obvious. Extend this line an equal distance south and you are at the South Celestial Pole. Not much use for most readers but if you ever get to more southern latitudes it can be done.
Big Bend NP in southern Texas on the Rio Grande will give Canopus a culmination of 6 degrees. That's a little lower than the 72 degrees in my home town..... G

The graphic says it is a F0 supergiant (it is luminosity class is between Ia and II), but if so, it will unlikely form a planetary nebula, but will instead likely explode as a supernova. e.g. It (just) exceeds the upper PNe limit of 8 solar masses. It is also remains a difficult star to investigate mostly due to the excessively bright corona that veils the photosphere. Canopus also has a measured magnetic field, and because of its brightness, it clearly shows Zeeman shifts in the spectral lines. This been shown to have a rapid period of 6.9 days. Weiss (1986) suspected this was evidence that the star was a oblique rotator.

Canopus is admittedly on the edge — at 8 solar masses, it's right on the dividing line between stars that collapse into white dwarfs and those that collapse into neutron stars or black holes. The answer — whether it will go supernova or just blow out a planetary nebula — depends on exactly how much mass it has now (a bit uncertain) and how much mass it loses via its stellar wind or more forceful outflows. From sources we found while fact-checking, it seems that planetary nebula is the prediction but to know for certain only time will tell!

Also, I agree that Canopus's hot corona — ten times hotter than the Sun's — is fascinating!