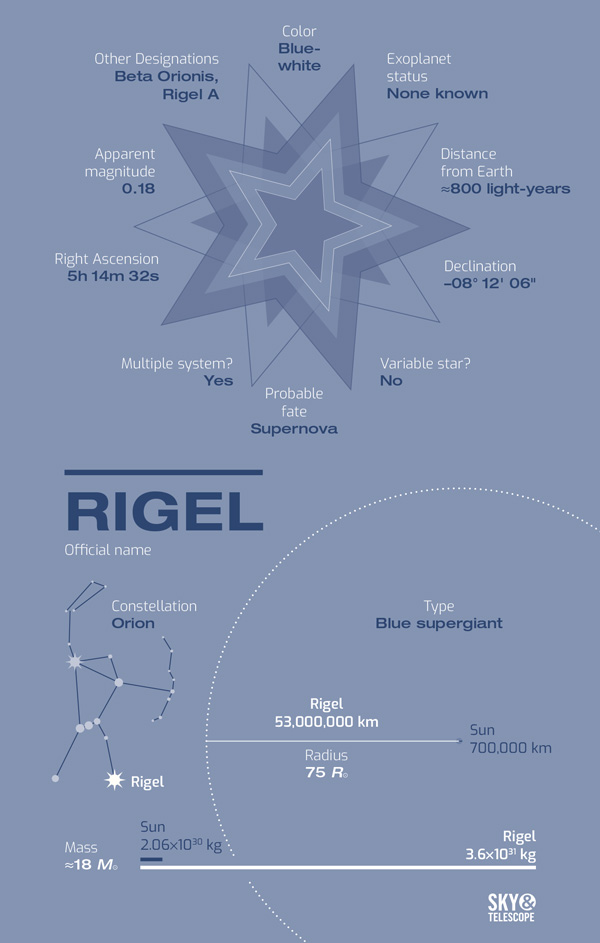 Like a bestselling music album with multiple chart-topping hits, Orion is an incredibly rich constellation, blessed with multiple bright, interesting stars, any one of which would be enough to solidify Orion’s reputation. We’ve already visited Orion once before in this Meet the Stars series, when we explored the constellation’s enormous red giant Betelgeuse. In this installment, we’ll look at the smaller but no less interesting Rigel.

Rigel is a blue-white supergiant, about 800 light-years distant but luminous enough to still shine in our sky as the seventh brightest star. When discussing stars, terms like “giant” and “supergiant” get tossed around so often that the concept of “giant” can become commonplace in our minds and start to lose its punch. In the case of Rigel in particular, it’s helpful to remember that this star — while indeed smaller than its neighbor Betelgeuse — is still incredibly large, roughly 75 times the diameter of the Sun (which, of course, is itself immensely larger than Earth). If our Sun and Rigel could swap places, Rigel would be large enough to nearly encompass the orbit of the planet Mercury. The reason behind Rigel’s immense diameter lies in the fact that it has extinguished its supply of hydrogen and has moved on to the next phase of its lifecycle, which causes the star to expand vastly. But even as it ages, Rigel remains very hot, and this high temperature is the cause of its blue color.

Rigel is not alone. The main star — the one we call Rigel and that we see shining at magnitude .018 — is technically designated Rigel A. Accompanying the giant star at a distance of about 2,200 a.u. (330 billion kilometers) and nearly lost in Rigel’s glare is the spectroscopic binary Rigel B. A spectroscopic binary is a pair of stars so close together that they can’t be seen individually. Instead, Doppler observations reveal the speeds of two stars orbiting each other. The Rigel B pair is dim — about one four-hundredth the brightness of Rigel A — so spotting the companion system requires good optics and clear conditions, but the reward of viewing the dim binary contrasted with the brilliant Rigel A is worth the effort. Both members of the Rigel B binary are main sequence stars and a little larger than the Sun, so viewing them next to their supergiant companion is a great visual lesson that illustrates the colossal difference in energy output between supergiant and main sequence stars.

“Connecting the dots” and tracing images in the stars has been a longtime fascination of humans worldwide, but the amazing part is how various cultures can independently reproduce the same basic idea. The stars in Orion have been traced into a man — sometimes a hunter, sometimes a giant — in multiple cultures throughout history, but it’s from the Arabic traditions that we derive Rigel’s name: “Rijl Jauzah al Yusrā”, which means roughly “the left foot of Jauzah” (the Arabic title for Orion).

How to See Rigel

Orion is the king of winter constellations in the Northern Hemisphere, but this means that you might have to brave a cold night or two for viewing. Once you go looking for Orion, he’s hard to miss, since the constellation is large, prominent, and only a short hop from Sirius, the brightest star in the sky.

For enjoyable early evening viewing, opt for late fall or early winter, when Orion pops up over the eastern horizon not long after dusk. Later, in early spring, you can easily catch Orion riding high in the southern sky just after sunset. This is also a fine time for observing, with warmer evenings and the constellation placed high up in clearer air.

Rigel’s blue color is clearly visible without optical aid. With a 6-inch or larger telescope (or 3-inch, if conditions are excellent), you can try to spot Rigel B. Even under high magnification, Rigel A will appear as only a point of light, but keep in mind that you’re studying a truly immense object. Finally, recall that Rigel is Orion’s left foot, so when viewed from our perspective, it’s on the lower right side of the constellation. This is a great star, so why not go see it tonight?

I really enjoy viewing Rigel A and B using my 90-mm refractor. Easy split at 56x or more and fun to look at. In December I plan to view M42, the Great Orion Nebula using my 10-inch Newtonian at low power (2-inch eyepiece), wide field view and the 90-mm looking at Rigel. Good data table here in the report.