Imagine going to a swank restaurant to have your all-time favorite meal, only to be served three delicious (and filling) appetizers before the entrée arrives. 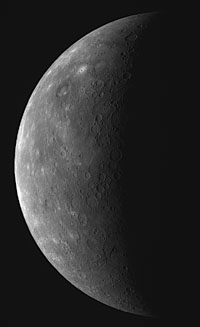 Closing in on Mercury, Messenger snapped this view of the planet from 16,700 miles (26,900 km) away. Terrain near the limb has never been photographed at close range. Click on the image for a full-resolution view and here for a view highlighting strange double-ring craters.

That gives you a sense of what planetary scientists are experiencing at the moment, now that NASA's Messenger spacecraft has completed its third and final flyby of the planet Mercury. The next time these two come together, on March 18, 2011, the spacecraft will fire a braking rocket, slip into orbit, and begin an intensive year-long study of the innermost planet.

Today's flyby came at 21:55 Universal Time (5:55 p.m. EDT), with the spacecraft skimming just 141 miles (228 km) above the planet's night side. The hello-goodbye encounter provided a final gravitational boost in what has already been a long mission.

Launched on August 3, 2004, Messenger (short for Mercury Surface, Space Environment, Geochemistry and Ranging) has made one flyby of Earth and two of Venus besides the triple play at Mercury. By the time it becomes the planet's satellite, it'll have looped around the Sun 15 times.

Naturally, the mission's scientists had plenty of ideas for sightseeing today. During the approach, Messenger's cameras snapped away to fill in the last big gap in global surface coverage. 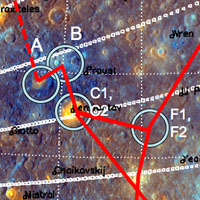 As Messenger departed Mercury after its third and final flyby on September 29, 2009, the spacecraft's MASCS instrument observed a dozen targets (mapped here) to obtain full spectral coverage from ultraviolet to near-infrared wavelengths. Click on the image for a larger view.

In addition, the MASCS instrument (or, if you insist, the Mercury Atmospheric and Surface Composition Spectrometer) picked off a dozen sweet spots identified in the two prior encounters, hoping to reveal more about the planet's perplexing surface composition. MASCS is also spending 13½ hours scanning behind the planet's night side to map out the abundance of sodium and calcium atoms escaping along in a tenuous anti-Sunward "tail." And this pass closely matches the second encounter's geometry, allowing on-board magnetometer to sample how the planet's magnetic field changes with time.

As I write this, Messenger has turned its main antenna back toward Earth and is streaming recorded observations from its eight instruments to eager scientific teams. The first close-up images should be released tomorrow morning around 10:00 a.m. EDT, so be sure to come back for an update.

You can also follow the mission's progress at this website maintained by the Johns Hopkins University's Applied Physics Laboratory, which built and operates the spacecraft.