Here's a cautionary story about someone who was careful with his observing gear — and still got burned. 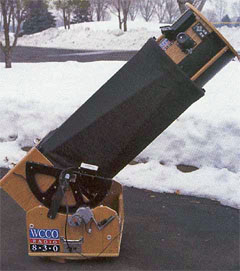 Here's a photo of Mike Lynch's 14½-inch Starmaster telescope in happier times. It's been a big draw during his frequent star parties and skywatching classes.

Some of you probably know (or know of) Mike Lynch, an avid amateur astronomer who hosts frequent star parties in the Minneapolis-St. Paul area. He's the author of several skywatching books, writes a column for the Twin Cities' Pioneer Press, and hosts an astronomy website. You might not know that he's been a meteorologist for radio station WCCO for nearly 30 years.

A week ago Lynch headed off to the radio station after observing the night before with his 14½-inch Starmaster Dobsonian. He'd set it up on his back porch and, too tired to drag it back inside, wrapped up the session by slewing the tube down to horizontal, covering it, and placing a towel over the eyepiece hole to prevent dew buildup. Pretty much standard operating procedure, right?

Well, later that morning, Lynch got a frantic call from his wife. "The telescope just blew up, and the deck's on fire," she exclaimed. Lynch rushed home in a panic, only to find the scope pointing skyward and nothing left of the secondary cage but a charred skeleton.

It didn't take him long to figure out what had happened. 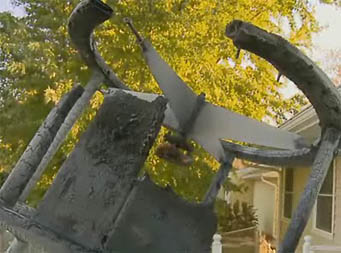 A freak alignment with the Sun caused the telescope's secondary cage to erupt in flames, leaving nothing but these charred remains.

"The wind blew the cover off," he explains. "The scope was locked horizontally but the wind blew it out of gear and lifted it skyward — toward the southeast, unfortunately! Later that the morning the Sun just happened to pass in front of the mirror. What are the chances of that! When that happened, all hell broke loose: the eyepiece mount cap caught fire, and soon the entire upper half of the scope exploded in flame. The hand controller, eyepiece mount, and Telrad finder totally disintegrated!"

Luckily, his wife caught sight of the fiercest fire she's ever seen, and her call to 911 kept the damage confined to the deck and, sadly, to the telescope. "Fortunately my insurance will cover the loss," Lynch says, "but I have to tell you I feel bad about it" — though not as bad, he admits, had the Sun taken out his 20-inch Starmaster instead!

You'll chuckle — and wince — when you watch WCCO's video segment about this freak accident.

Sorry to hear about this, Mike! Who could have predicted it would happen?!

You might imagine why this story caught my attention this morning when I checked the S & T website. (See below)

Try building the superstructure out of Invar 32 or 36 and the shield out of aluminum tube. I have a flip down cover for the top and a heavy ballast in the bottom. Regards, George.

The manual that comes with Obsession telescopes warns of âexploding scopesâ and says that one should never point a wood & plastic scope at the sun.

Is it possible that just the way-off-axis glint of the sun in a large telescope mirror could damage someoneâs eyes? I donât know, but just in case I always secure my scopes so that there is no way the sun can reflect off the primary.

Mine never exploded, but after cleaning the mirror once, I took it outside to the sunlight to check for any dust or crud. A few seconds later, I started smelling smoke. I looked up and saw that I was holding the mirror at the exact focal length to reflect the Sun to start the porch roof smoldering. Lucked out that it didn't flame up.

Face it, your noble scope performed a Novae as best it could. It overheard those countless star-party stories of the great super novae and everyone's dream to see one. It failed to show you even one, so instead became one... partly to please you and partly because it is near halloween.
Whatever the case, its death may have been its greatest feat. It so greatly contributed to public outreach and gives a reminder to us all about ol' Sol, the star we take for granted way too often... and how important and powerful Sol righty is and how unpredictable weather (and kids) are around telescopes; they both seem to POP up out of nowhere when you least expect them. Kudos dear Dobs for your precious sacrifice. May your death and coalescence of legendary tales form many a great star enthusiast for decades, even centuries to come... discovering future legends, perhaps, with tales -even comet tails- of their own.

Cheers! a toast to the noble scope however its outreach is performed... and to the people behind them.

The telescope mirror has an area of about 0.1 square meter, so about 100 watts of sunlight was what started the fire. A 100 watt lightbulb doesn't normally start fires, but, concentrated down to the focal plane, it sure can! After all, a magnifying glass can start a fire with less than 10 watts of concentrated power.

Thanks for sharing your "lesson" so that others may not repeat it!

My version of solar observing gone wrong goes back to when I was teaching Astronomy at Anne Arundel Community College many years ago. I had regular public observing sessions and was setting up for some sunspot observing with the 14 inch Celestron, being very careful to put a glass aluminum filter over the main aperture. I had not filtered the finder scope however. That finder had a fairly good aperture of about 60 mm and, unfortunately, the light path found its way to my very nice polyester overcoat. While my coat did not burst into flames, it did get a pretty impressive hole melted in it!

The odds of this alignment happening, are soooo small! Mr Lynch probably ought to go buy a lottery ticket next.
(Perhaps he'll win enough to buy another scope!)

Had a very similar episode at the 2001 Chiefland star party. Late night after driving there, I pushed my tube horizontal. I was tired enough that I didn't consider that I pointed it east! Fortunately my neighbors put it out before any serious damage was done.

Three years later I meet a nice lady at the Tennessee star party, we exchange a few funny stories, she looks at me and says "That was you?!?!"

You'll be famous before you know it! 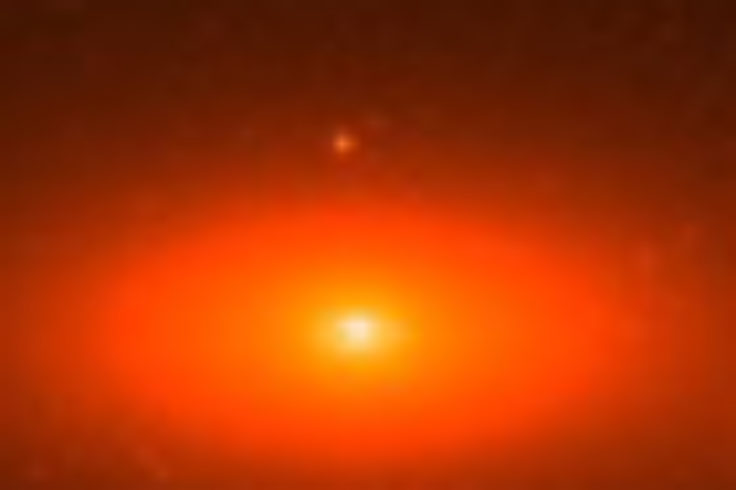