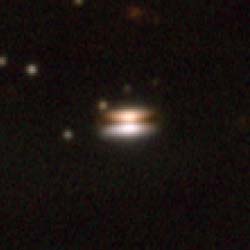 Protoplanetary disks, like this one near Rho Ophiuchi captured with the European Southern Observatory's 8.2-meter Very Large Telescope ANTU, were recently thought to be depleted of sulfur. Not anymore.

Astronomers know how much sulfur should be in protoplanetary disks, the places where planets are forming around other stars. Meteorites — relics from the earliest epochs of our own solar system — provide the evidence. Scientists can take a meteorite into a lab and learn exactly what the rock is made of and how much of each element it contains.

But observations of protoplanetary disks were confusing at best. If meteorites indeed tell us the ingredients of the early solar system, then their composition should match spectroscopic observations of disks. Yet sulfur appeared to be missing. In a study published in last week's Nature, a team of researchers led by Lindsay P. Keller have apparently solved the mystery.

Keller's team took meteorites into the lab and looked for their various spectral signatures. Of particular note was iron sulfide (FeS). Most of the sulfur trapped in meteorites is in the form of FeS. But there was no spectral signature of FeS in protoplanetary disks. Solving the apparent paradox, Keller's team identified FeS to have a broad absorption feature at 23.5 microns. Previous researchers had attributed the 23-micron line in space to FeO, not FeS.

The "new" abundances of observed sulfur are consistent with theoretical estimates, assuming that most of the sulfur resides in FeS grains.

Furthermore, Keller's team proposes a mechanism for why sulfur is trapped as FeS in protoplanetary disks but appears mainly in the gas phase in the diffuse interstellar medium. When spread thinly in interstellar space, FeS molecules get split apart by high-energy radiation, producing Fe metal and sulfur gas. Conversely, dense molecular clouds tend to be depleted of sulfur gas — most of it likely trapped in FeS grains.