Observations of one of the most powerful supernovas ever recorded suggest that the standard model for gamma-ray bursts might be missing a piece of the puzzle. 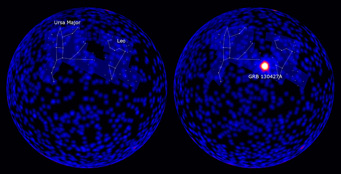 Black Hole Birth Cry
The GRB 130427A was first detected by the Gamma-ray Burst Monitor aboard the Fermi spacecraft. The initial burst of gamma rays herald the collapse of a star into a black hole. Click image for larger view.

In the early-morning hours of April 27th, a burst of high-energy photons set off an alarm on the Fermi Gamma-Ray Space Telescope. The photons came from a star that exploded 3.75 billion years ago in spectacular fashion, sending out a brilliant flash of radiation known as a gamma-ray burst.

The star’s demise wasn’t just any supernova. The gamma-ray burst GRB 130427A turned out to be the longest, most energetic such explosion on record.

Within four minutes of the alarm, the Swift spacecraft had swung its three telescopes to monitor the explosion with Fermi. An array of robotic telescopes (Rapid Telescopes for Optical Response, or RAPTOR), the CARMA millimeter-wave observatory, and the NuSTAR X-ray telescope also joined in on the action. In the end, the explosion flooded 58 observatories worldwide (on the ground and in space) with its photons.

In this week’s Science, four international collaborations dissect this data treasure-trove to find out what made the monster tick. And it turns out the observations show astronomers are missing a piece of the GRB puzzle.

The Burst That Kept On Giving 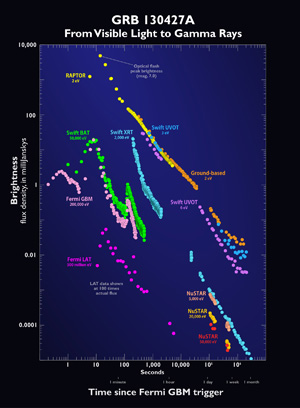 GRB 130427A's Evolution
The evolution of GRB 130427A follows a similar pattern, decreasing steadily over time, regardless of wavelength. That universal pattern suggests one mechanism might be responsible for all the different photons observed from this gamma-ray burst. (Click image for larger view.)

These days, GRBs are common observations, appearing at a rate of about one per day, but GRB 130427A was a rare occurrence. Not only was this burst extremely powerful, it also happened to be nearby. Combined, its brightness and location made it easy for telescopes to collect heaping piles of data.

And the burst just kept on giving. Although the main burst lasted just 20 seconds (typical for this kind of “long” GRB), stray gamma rays kept pouring in for another 20 hours, long after the main burst had finished — and much longer than any other such burst.

But of all the thousands of gamma-ray photons Fermi collected during that time, it only took two to steal the spotlight. The first appeared 19 seconds after the burst began; the next appeared 3¾ minutes later. And these photons packed a serious punch: 73 and 95 billion electron volts, the highest-energy photons ever recorded from a GRB.

There’s just one problem: according to the current model used to explain GRBs, these photons shouldn’t have existed.

Another Piece to the Fireball Puzzle? 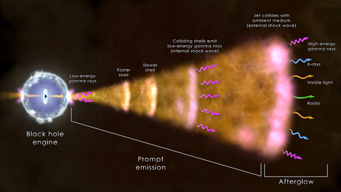 The Standard GRB Model
The usual picture for GRBs has the initial gamma rays coming from colliding shells of gas within the jet. The afterglow, produced minutes or hours later, arises from the jet smashing into the cocoon of hot gas surrounding the star. (Click image for larger view.)

In the standard picture, “long” GRBs like 130427A (which last on average about 30 seconds), herald the collapse of very massive stars. As the star’s core implodes to form a black hole, gas just outside that boundary feeds a jet that burns its way through the star’s outer layers. Collisions within the jet produce a brilliant burst of emission, which we’ll see if we happen to be looking down the jet’s nozzle.

It takes only seconds for the jet to escape the star, but even then it’s not free. It rams into the surrounding gas cocoon left behind by the dead star’s winds, pushing electrons to nearly the speed of light. As the ultra-speedy particles race around magnetic field lines, they release their pent-up energy as radiation: the burst’s afterglow. This synchrotron radiation explains a lot of the emission we see from GRBs, including everything from gamma rays and X-rays to visible light.

This animation shows how the standard GRB model works: