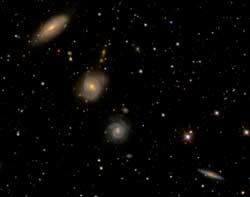 How would you classify the members of galaxy group Hickson 88?

It seems that people like galaxies — a lot. So much so that the Galaxy Zoo project is off to a flying start. According to a press release this week, since mid-July 85,000 people have signed up to pore over images of galaxies from the Sloan Digital Sky Survey to help classify more than one million star systems.

Unlike other "@home" computing projects — looking for aliens and looking for cures for disease — that just require your computer to run software in the background or while the CPU's idle, Galaxy Zoo needs brainpower. Participants have to make a human judgment to classify the galaxies.

If you don't want to miss out, take the tutorial of galaxy morphology (the scientific way of saying "shape and structure") and join in.

Just a nod toward the good folks at Stardust@Home <http://stardustathome.ssl.berkeley.edu/index.php>. That's another project that utilizes brain power to identify potential dust particles recovered from the Stardust spacecraft's aerogel collector. Participants do that by recognizing likely dust tracks through the aerogel.